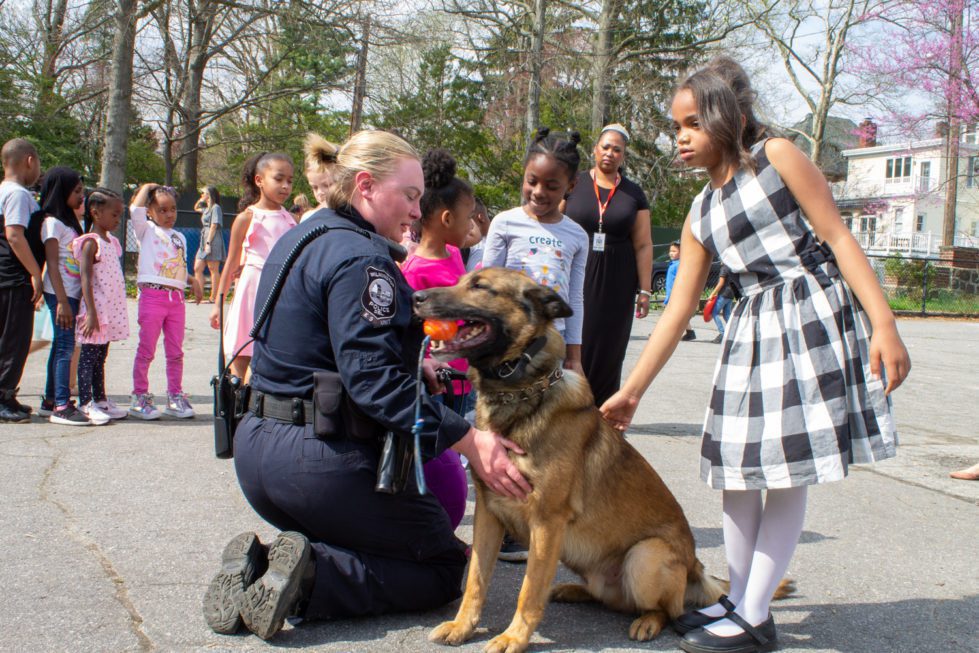 Children at Highlands Elementary School made some furry friends on Thursday.

Wilmington police officers Andrew Conine and Hailey Cockerham brought their two K-9 partners, EXO and Baylis, to the school to demonstrate to a group of 30 kindergarteners, third-graders and fourth-graders how the animals help.

The children were thrilled with every move the dogs made as the officers went through a checklist of commands for the dogs.

EXO, a German shepherd, and Baylis, a Belgian malinois-shepherd mix, jumped over fences, pursued a target, and, most importantly, sat long enough to be petted by each child.

When Conine asked the students where they thought the dogs came from, one student shouted “from the pet shop.”

The dogs both came from Europe – EXO is spoken to in Czech by Conine while Cockerham speaks to Baylis in French.

A broker called Tarheel Canine picks out the dogs from overseas and brings them to North Carolina, where they are selected and picked up by the Wilmington Police Department.

The department gets the dogs when they are between 1 and 2 years old and the K-9s typically work until they are 7 to 9.

The pups go through a six-month training process. The first month or so is exclusively dedicated to the officer bonding with the dog and forming a relationship.

Then comes obedience training. The dogs have been trained in Europe, and officers must learn and practice speaking commands in another language.

Cockerham said this part of training is surprisingly tiring because officers are essentially playing tug of war with a 70- to 100- pound dog all day while studying commands in a foreign language.

The next stage of training is tracking and scent discrimination. The dogs have a much more developed sense of smell than humans. The K-9s are trained to be able to identify drugs, weapons and explosives.

Most K-9s that run through the unit are either a German shepherds or Belgian malinois.

Conine asked the crowd to raise their hands if they thought the dogs were trained to attack.

All the children’s hands shot up.

Conine said that that’s a misconception. The job of K-9s actually is tracking guns, explosives and drugs, he said.

Sometimes the dogs are used to chase or subdue a suspected criminal who has any of those.

The dogs have a big advantage over officers using guns or tasers, Conine said.

The animals can be called back, he pointed out.

Once an officer fires a gun or taser, the firing can’t be undone, he said.

But dogs can be commanded to retreat and pull back if a criminal is cooperative and surrenders.

To show the kids how that happens, Cockerham wrapped a dog’s protective vest around her arm like a sleeve and stood about 100 feet away from Conine and EXO.

Conine shouted a Czech command, and EXO sprang from a sitting position into an all-out sprint to Cockerham, where he clamped his jaws around her arm.

K-9s are trained to attack specifically where the officer tells them to, Cockerham.

At the shout of another command from Cockerham,  EXO quickly released Cockerham and playfully strutted his way back to Conine.

“There’s no animosity between the dog and the target,” said Conine. “They are as playful as can be, but they are trained to be extremely obedient and responsive to our commands.”

Sometimes, the police officers said, the dogs wear protection vests, but only in potentially dangerous settings.

The vests aren’t bulletproof but they provide additional protection. They are heavy and can make the animals overheat.

Highlands Elementary kindergartener Zion, who was celebrating a birthday Wednesday, was tapped to examine a K9 protection vest.

The officers asked one kindergarten student, Zion, to help show off the K-9 protection vests. Zion squeezed the vest and lifted it over his head to see how heavy it was.

The vests are heavy, aren’t they?” Conine asked. The birthday boy who didn’t agree.

Zion proudly carried the vest around the crowd so they could feel it.

Whispers of “it isn’t heavy” could be heard floating among the children.

“Well, you little ones are a lot stronger than me!” Conine joked.

The Wilmington Police Department has 13 K-9s, 12 male and one female.

Cockerham said the dogs don’t typically live very long after they leave the unit and retire. Nine to 13 years is the typical lifespan of a German shepherd.

EXO already is retired, but Bayliss is still a working animal.

The demonstration ended with Cockerham giving Bayliss a command to sit.

The children rushed to line up so they could pet Baylis on their way back into the school.

Conine said the K-9 unit comes to schools to expose the younger generation to the dogs and educate the community on what the duties of law enforcement is.

He said connecting with the community they serve, especially with younger children, helps forge trust between the police department and the city.

“We want all kids and residents to never be afraid to ask us for help,” said Conine. “It’s become popular to portray cops in a negative light and we don’t ever want these kids to think twice when they need help.”

One of the HIghlands students had met EXO last summer in a different demonstration.

Conine said since they’ve done so many demonstrations, people on the street will flag Conine down because they recognize EXO.

The officers enjoy that.

“It’s good to be reminded that the majority of residents support us and stand behind us,” Conine said. ”