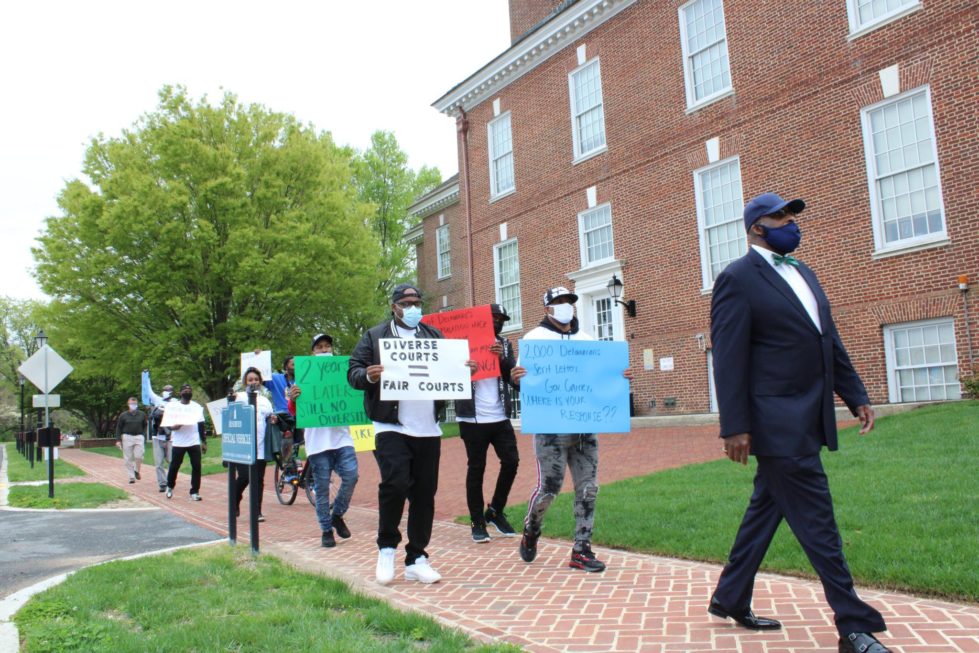 A Newark minister upset that he and the Rev. Al Sharpton were denied a meeting to weigh in on the Delaware Bench and Bar Diversity Project says he fears that it will be another example of the good old boys making decisions.

“These people that are controlling our lives don’t look like us, so that’s why I’m just really trying to advocate for closing those gaps,” said Pastor Blaine Hackett of the St. John AM Church in Newark.

The Delaware Bench and Bar Diversity Project was established in May by Chief Justice Collins J. Seitz Jr. to help Delaware attract and retain minorities in the legal profession.

A court spokesman declined to comment on Hackett’s reaction.

The Diversity Project is one of a number of moves made nationally by communities after the 2020 death of George Floyd touched off community demonstrations and riots and led to a national conversation on systemic racism and injustice. One aspect of that was the low numbers of minorities working in court systems that send large numbers of minorities to prisons.

The request of Hackett and Sharpton, who lives in New York, was declined by Delaware Supreme Court Justice Tamika R. Montgomery-Reeves, who is co-chairing the project.

Hackett and Sharpton have appeared before on behalf of Citizens for a Pro-Business Delaware, a group  that says it is funded by employees of TransPerfect Global, a New York company that provides translations.

The Shawe family that owned the company became involved in Delaware issues after the Delaware Chancery Court ordered Transperfect must be sold, which it was to owner Phil Shawe. Transperfect continues to battle fees charged to it in the proceeding.

The family and Delaware business group have worked against Carney’s election and been critical of the Chancery Court specifically and Delaware courts in general. The organization has spent hundreds of thousands of dollars lobbying for changes, including more diversity on the courts.

Chris Coffey, campaign manager for Citizens for a Pro-Business Delaware said, “Rev. Sharpton and Pastor Hackett are civil rights leaders who have been fighting to diversity Delaware’s courts for years. CPBD … shares that goal, and is willing to work with anyone to accomplish it. If the Bench and Bar Diversity Project won’t take a meeting with them because of a perceived affiliation, maybe they aren’t as serious about diversity as they claim.”

Hackett said he wanted to talk to the project organizers about putting people of color into positions to help and give a voice for Black and brown people.

“I’m just trying to be a voice here in Delaware,” he said.

He likes working behind the scenes, he said, and is willing to work with anyone on the same kind of issues. He said he met Sharpton after appearing in several forums with him. Sharpton has been involved in similar fights before, Hackett said, “So you know if he can help those other countries, other cities and states he can help us.”

Hackett led an April protest march demanding more diversity on Delaware’s Chancery Court, which doesn’t have a Black member since Montgomery-Reeves joined the Supreme Court. Hackett said he thought that is important because the Chancery Court deals with a lot of financial issues, and not a lot of the money involved flows to Blacks or Black businesses.

The Newark pastor said he wanted to encourage the project to be more inclusive rather than exclusive and not rely on the same pool of people with the same type of ideology they always go to.

Hackett said he hoped the process would be more open to more opinions, especially when that opinion doesn’t quite agree with theirs.

In a two-page letter to Hackett and Sharpton, Montgomery-Reeves described how the Diversity Project is being set up and pointed out that the Rev. Dr. Christopher Bullock, a Black pastor of Canaan Baptist Church in New Castle, is among those on a working committee.

She said the Diversity Project, headed by Seitz and her, is working with the National Center for State Courts and the AccessLex Institute. The NCSC is connected to organizations of chief justices, court administrators and other judicial leaders and helps courts tackle many issues. AccessLex’s members include 200 law schools dedicated to increasing the access and affordability of legal education and has worked with other states to create pipelines of aspiring lawyers and law students. Both are supporting Delaware’s project with money and staff.

A “very diverse” steering committee includes a judicial officer representing each state courts and a representative from the Department of Justice, Office of Defense Services, Executive Branch, Delaware State Bar Association, Delaware Law School, Delaware State University, the University of Delaware, nonprofit legal aid organizations, Delaware law firms, Administrative Office of the Courts and more. Montgomery-Reeves said. She did not say who those people were.

The steering committee is organizing working groups that will examine specific areas and seek help from area experts  “to include a broad range of thinking and experience,” Montgomery-Reeves said. They include grassroots organizations, residents, activists, faith leaders and others, she said.  She did not specify what the subject matter was.

“Delaware has not been immune to the diseases of racial inequity that have plagued our country for centuries, but we are making great efforts to find solutions,” she wrote.
“Those of us who lead our profession strive to ensure that we reflect the people we serve. To that end, we are working hard to make our strategic plan and action steps well-informed, well-supported, and successful so that the Delaware bench and bar can better reflect the community that we serve.”

“I’m just surprised anyone wrote back in all honesty, because they seem to dismiss folks at times, you know,” Hackett said. “They were trying to be a little cordial, but still declined to meet with us.”