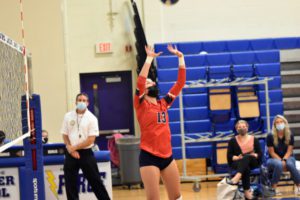 WILMINGTON — Unbeaten Newark Charter traveled to Wilmington Charter for a key Diamond State Athletic Conference volleyball match on Tuesday, and the Force took the Patriots to five sets before Newark Charter prevailed, 3-2. The Patriots improved to 6-0 this season.

The fifth-ranked Force took the first set, marking just the second set No. 4 Newark Charter had lost all season. But the Patriots responded in the second, running out to leads of 5-0 and 10-2, getting contributions from a number of players, including Aubrey Celeste and Angela Steinkrauss.

But Anjali Vishwanathan scored on a kill for the Force, and she moved to the service line. She proceeded to serve up an ace, part of a seven-point run that cut the Newark Charter lead to one. The Patriots’ Gillian Burrows smacked a kill off the end line to bring the Force run to an end. Newark Charter restored a substantial lead over the rest of the second and won on a hitting error.

The third set started out all Force, as Christina Marcin and Vishwanathan had tip kills on the way to a 6-0 start. Marcin also tossed in an ace, and Vishwanathan had a block during that opening run before Steinkrauss brought it to an end with a smash. The Force kept the pressure on, holding a13-7 lead midway through, but a series of unforced errors helped bring the Patriots back into contention.

The Patriots tied it on an unforced error, and an ace by Emily Turner off the tape put them in front for the first time in the third. The teams were tied at 18, but Burrows anchored a five-point run that included an ace by her. Wilmington Charter fought valiantly, but McKenna Ritchie closed it out for Newark Charter with another ace.

Down a set, the Force forged a small lead in the fourth. They played strong defense, with several blocks up front and two improbable digs by Julia Sauder. A run put them up 12-5 before Celeste ended it with a blast. Marcin had point on two straight bombs to increase the advantage to 19-8, and Robyn Bufano added another with a tape ace. A hitting error ended the set at 25-13.

Wilmington Charter continued its momentum by scoring the first two points of the decisive fifth set, but the tides shifted after that. Emily Turner got the Patriots on the board with a kill to the far right corner, and then with a tip that deflected off a Force player’s hands. Burrows gave them the lead with an ace, and Newark Charter scored two more to go up, 5-2.

Two unforced errors on Wilmington Charter made it 7-3 in favor of Newark Charter, the Force called timeout. Steinkrauss added another ace a few points later to extend the lead to six, and Wilmington Charter could get no closer than four the rest of the way. After a Celeste kill sent it to match point at 14-7, the Force were able to save two, but a hitting error brought the marathon to an end.

Celeste led the way with 18 kills for the Patriots, while Ritchie had 19 digs. Newark Charter is 6-0, one of two remaining unbeaten teams in the state. They will put that record on the line Saturday at home against No. 3 Wilmington Friends at 12:30.

For the Force, Marcin had 14 kills, and Vishwanathan added 11, along with four aces and five blocks.  Wilmington Charter fell to 3-3; the Force visit Red Lion on Thursday at 7.