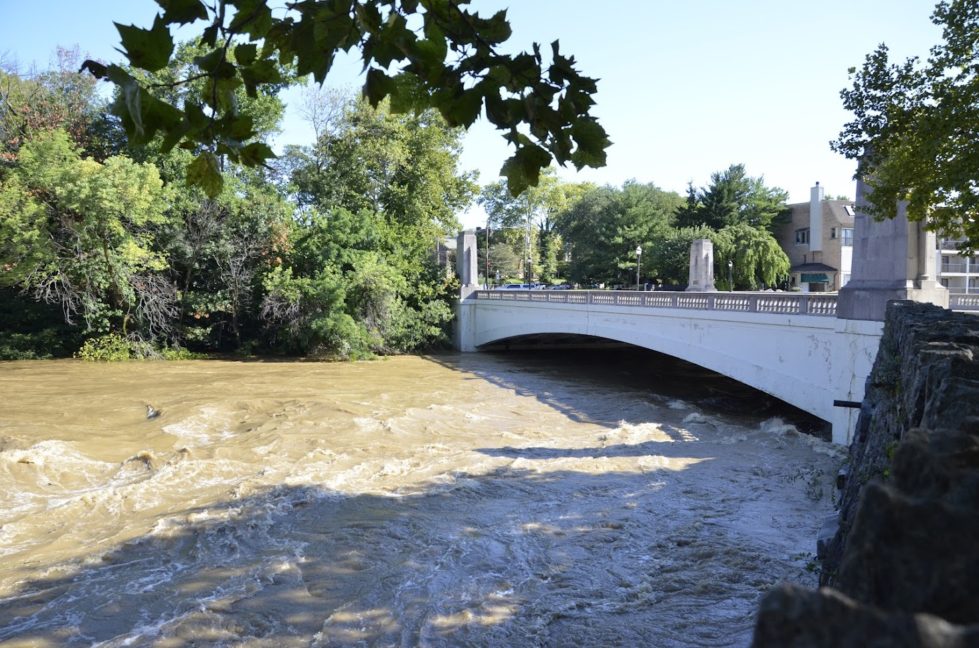 The city of Wilmington posted this photo of the North Market Street Bridge to social media Thursday.

Forecasts in southern Delaware quickly shifted, originally predicting two long, rainy days of thunderstorms with the potential for flooding and tornadoes. Instead, in Kent and Sussex Counties the skies cleared, bringing sunlight and temperatures in the mid-70s throughout Thursday.

About 5 inches of rain were dumped on northern New Castle County Wednesday night. Massive amounts of water flowing downstream from southeastern Pennsylvania meant the area was harder than just getting its own rain.

The worst flooding could be seen along Brandywine Creek, a tributary of the Christina River.

In Wilmington, the Brandywine reached a flood stage of 23.14 feet, more than 4 feet above its major flood stage, according to the National Weather Service.

City residents on Thursday were encouraged to stay home. Emergency reception centers have been set up at the Police Athletic League and William “Hicks” Anderson Center if evacuation becomes necessary.

Multiple emergency operations involving city, county and state personnel are currently underway, including water rescues by the Wilmington Fire Department and New Castle County, according to a press release from Mayor Mike Purzycki.

A number of streets and bridges in the city remain closed, including:

Purzycki spent the morning overseeing operations and surveying damage in various parts of the city.

“Obviously this terrible storm has caused serious flooding devastation throughout the City,” Purzycki said in a press release. “We are doing our very best to ensure that everybody is safe, first and foremost, and that we address the aftermath of this historic storm so that we can get things back to normal again.”

Sen. Darius Brown, D-Wilmington, said in a Facebook post that he would work with the Delaware Emergency Management Agency and Gov. John Carney’s office to “make sure our neighborhoods have access to the Delaware Resilience Fund created in the wake of last year’s major storms to help homeowners pay for repairs not covered by insurance, provide assistance with their insurance deductibles and cover property clean-up costs.”

The press released provided the following advice for residents:

“Whether you drove through flood waters or had a parked vehicle submerged in flood waters, motorists should not attempt to start their vehicle and contact their auto insurance company immediately to determine the best course of action to transport and assess their vehicle,” said Ken Grant, manager of public and government affairs for AAA Mid-Atlantic.

Mechanical components, computer systems, engine, transmission, axles, brake system and fuel system impacted by water contamination may render the vehicle unfit to drive and in many cases vehicles sustaining significant water damage will be determined to be a total loss, according to an AAA press release.

If faced with a flooded vehicle, AAA wants you to know of the following advice:

Randall Law wants to flip symbol of hatred to peace with clothing line
House set to vote on weed farms, stores. Here's what you need to know
Brady re-elected Delaware GOP chair amid talk of party unity
McGuiness found guilty on 3 of 5 charges