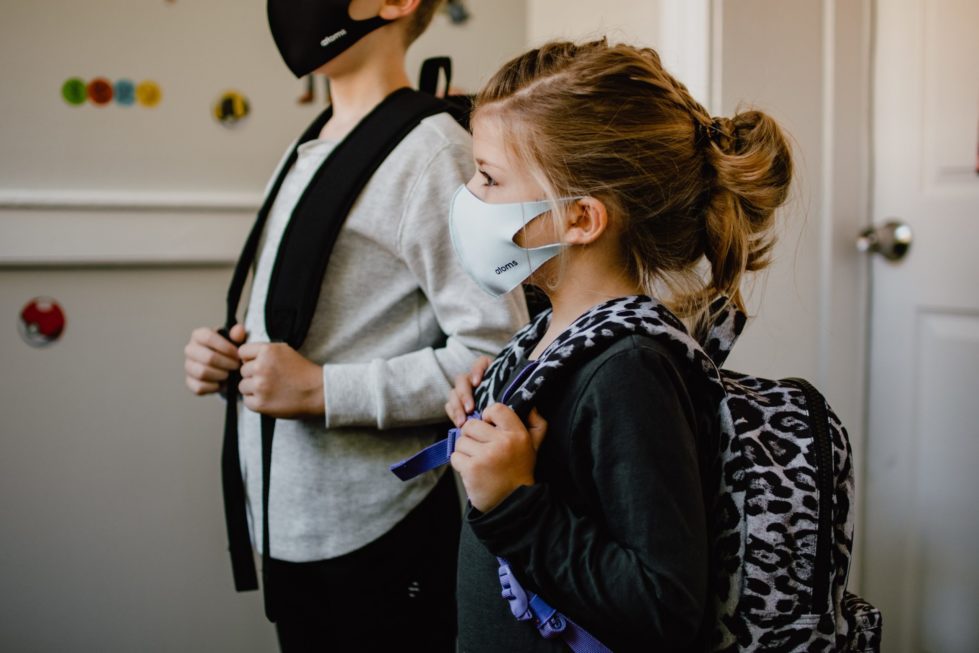 Some Delaware parents say they will keep their children out of classrooms rather than send them wearing a mask.

Some parents who oppose Gov. John Carney’s mandate requiring school children and those in childcare to wear masks indoors say they will not send their kids back to school.

“For my kid personally, it’s not good for his mental state,” said Donna Austin, who has one child in Smyrna School District. “Kids that age have to be able to see people and masks are taking away all that development.”

Christina Dietrich, who has three children in the Appoquinimink School District, said children are paying the price for the failure of adults to stop the spread of the virus.

“The kids should have the least restrictions,” said Dietrich, who is a home health nurse who homeschooled her children last year.  “Grownups shouldn’t be able to go to clubs, when they’re at some risk, where kids are at miniscule risk, and they can’t go to school without masks.”

Christina Caldwell, whose three children are in Red Clay School Consolidated District, said wearing a mask should be a choice.

“If you’re scared then you have your kids wear a mask, but for the rest of us — we live in America,” she said. “It’s free will. We should have a right to decide what’s best for our children and for our bodies.”

Carney’s announcement Tuesday affects all children over the age of 2 in all public, private and parochial schools, as well as childcare homes and centers.

Prior to his announcement, the decision to require masks was left to local school districts.

Some parents responded with outrage, saying that Carney was usurping parental rights and making medical decisions for their kids. Many said they believed it hurt their children’s mental health, which some had been struggling with during the last year.

The masks contribute to an atmosphere of constant fear, some said. Masks worn all day also accumulate bacteria and cause other problems, such as children not being able to see eachother or their teachers well enough to communicate effectively.

During the Patriots for Delaware’s Wednesday night emergency meeting at the Smyrna Diner to talk about what to do in the face of Carney’s move, many parents threatened not to send their kids to school.

On Thursday, Donna Austin said Carney “has taken on the role of trying to be the parent to all of these children because he doesn’t think that us parents are competent to know what is best for our kids.”

“He is definitely, definitely a tyrant for what he’s doing,” Austin said.

She said not being able to read other people’s expressions has an overwhelmingly negative effect on her son’s well-being.

“Learning the facial recognitions of society and learning how to read people — those cues and that kind of stuff — there’s more than just physical well-being for our kids and we have to look at the long-term effects on their mental state,” Austin said.

She plans to keep him home.

But a spokeswoman from the Smyrna School District said it is not offering online options for those who don’t want their children to wear masks.

“We are not allowing students to move from regular school to virtual unless we are provided with a doctor’s note,” the spokeswoman said. “If they want to switch from five days a week to virtual, it won’t simply be because the parents don’t want them to wear a mask.”

The system has too many moving parts, she said.

“We’ve already ordered a lot of our food, our transportation is already set our kids’ school schedules,” she said. “It would be a lot to change this late in the game.”

She had hoped her children would return to a traditional classroom setting this year, but now may continue to homeschool.

Her biggest objection to the mandate is that masks make communication extremely difficult.

“Ninety percent of our communication is non-verbal,” Dietrich said. “Teachers need to gauge children’s facial expressions in order to determine their comprehension, because a kid will make a confused face or open their mouth slightly like they’re about to ask a question.”

A spokeswoman for Appoquinimink School District said virtual offerings will be available for all students, regardless of the reason.

Erin Chronister said her 15-year-old son, who has an individualized learning plan, had to attend school in person every week and wear a mask. She watched his psychological state degrade rapidly.

“He would isolate himself, he became very depressed, the headaches were everyday, he was very fearful,” Chronister said. “This just kind of progressed and progressed to the point where he was not sleeping for three days at a time. Because of the lack of sleep he started hallucinating.”

As a result, her son was prescribed Prozac, an antidepressant. While it helped address some of the symptoms, he would only sleep during the day. When he tried to get back to a normal schedule, he struggled. At one point he told Chronister, “Mom, I just can’t do it.”

Chronister doesn’t want to send her two children back to school wearing masks all day, but for “thinking of homeschooling is very overwhelming,” she said.

Lisa Malatesta, who has two children in Red Clay Consolidated School District, said it “ makes me sick to even think about these kids every day – these 2 year olds wearing masks.”

Malatesta believes her children are being conditioned into a state of fear.

“My daughter was told that she had to get in the back of the line for ice cream in her fifth grade class last year because she had her mask below her nose too many times that day,” Malatesta said.

“They’re being punished for not covering their face all day or for taking a break to breathe. I think psychologically it’s making them afraid to not be a part of this quote-unquote norm that they’re creating for these kids,” Malatesta said. “And that to me is just bizarre.”

Malatesta isn’t able to homeschool her children. Her plan is to send her children to school without masks.

Christina Caldwell said her three children are “the ones who are losing out on so much because of all these restrictions.”

She may pull her children out of public school.

“If it gets to the point that I have to pull them and homeschool them or do a pod, then I will, because if it’s not this, next it’s gonna be a vaccine mandate and it’s like — where do we draw the line with what’s going on in that country? It’s off the rails,” Caldwell said.

Some kids are going to the nurse because they’re feeling faint in their masks, according to Caldwell.

“These kids are wearing masks for sports and athletes are fainting,” she said. “Does not anyone see what’s going on right now?”

Marie Dougherty has a son entering ninth grade. He was a student in the Brandywine School District before she pulled him out of the public school system.

Dougherty said that in her experience as a nurse, she’s found that the bacteria in repetitively-used masks presents a significantly higher health risk for children than COVID-19.

“I’ve seen some moms taking the masks from the kids and doing a culture and sensitivity test and the stuff that’s growing on it is disgusting,” Dougherty said.

Her children have suffered psychologically as a result of COVID restrictions, she said.

“My youngest didn’t go outside,” Dougherty said. “I had to go to work, you know, working 16 hours a day. And then he’s not going outside and his sleep schedule got disturbed — I had to put him on suicide watch for six months.”

Now he wants to take his General Education Development test and get a certificate instead of returning to school.

“I had a feeling that Delaware would conform to whatever the mainstream liberal overlords were pushing,” Barnhart said.

She said her son went from being a kid who loved to go to school to crying on a daily basis after masks were required in his Delaware school. He came home claiming he couldn’t breathe, that the mask made him sick,  hot and thirsty, she said.

His teacher said he was well behaved and didn’t complain in class.

“I’ve heard time and time again from people that small kids do really well with masks and that they’re not bothered by them, but that is because they are taught to be obedient and do what they are told, even if they’re uncomfortable.”

Last year, on his first day of school, she had to send him in masked, “with tears streaming down his face, into a building that he had never been to and I had never seen, since we could not tour it during COVID,” Barnhart said.

“Not a smile could be seen, or even a frown for that matter. It was the most dehumanizing experience I had ever put my child through.”