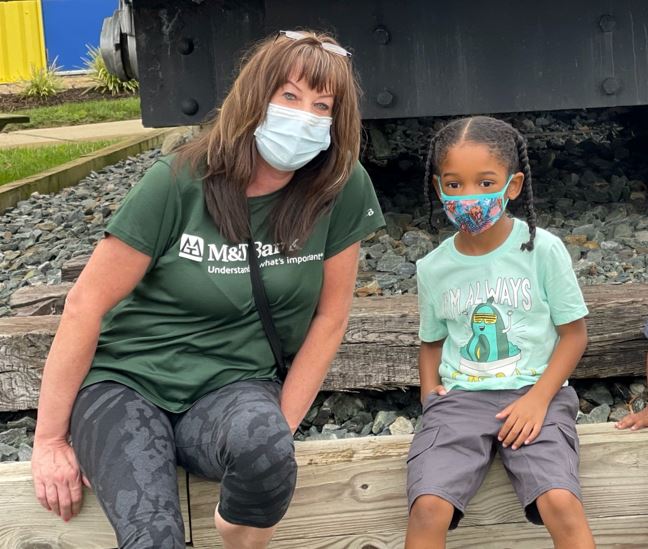 JoAnne Stout got to meet her reading buddy Aiden Bell, center, for the first time months after they began working together virtually.

On a warm, breezy day in late August, Wilmington resident JoAnne Stout waited patiently outside of the Delaware Children’s Museum on the Riverfront.

Full of excitement and a bit nervous, she stood underneath a tree to avoid the glare of the sun as she scanned the parking lot across the street.

She watched as a car pulled into the row of parking spots closest to her. Out jumped a family, not unlike the thousands of others that frequent the museum each year.

“Ms. JoAnne!” she instantly heard echo across the parking lot — the voice all too familiar.

It was that of 5-year-old Aiden Bell, with whom Stout had been virtually reading, talking and playing with throughout the pandemic as a Read Aloud Delaware volunteer.

The trip to the museum would be the first time the two had met in person. Aiden’s dad pushed a stroller carrying his youngest son as Aiden and his cousin grabbed the handles, looked both ways and crossed the street toward a teary-eyed Stout.

The two already had developed what felt like a lasting friendship.

Read Aloud Delaware is a nonprofit organization that sends volunteers into preschools around the state where they engage in one-on-one reading sessions with children.

With so many people worried about learning lags because of school interruptions caused by COVID, Read Aloud is one of many state groups continuing to promote literacy and comprehension.

When the pandemic forced the closure of many childcare centers and prevented visitors from coming in, Read Aloud was faced with a question: how can we continue to fulfill our mission without being present with students?

The answer: a new service that allows volunteers to read with students virtually, via video chat and screen sharing.

Every Sunday, Stout spends about an hour with Aiden talking, reading books and playing games.

The pair uses Caribu, an innovative app and marketplace that allows users to connect through a video call to read books, draw and learn together in real-time no matter where they are.

The platform has allowed Stout and Aiden to develop a strong connection, “so much so that sometimes we’d be on Caribu for an hour and his mom would pop in the screen and say, ‘Have you all gotten to read a book yet or anything’ because she could just hear us talking and talking,” Stout said.

Aiden is a bit shyer about expressing his feelings about Stout.

“She makes me feel happy,” he says.

Aiden’s mom, Schanal Chin, said she’s grateful that her son has been able to forge such a valuable relationship with Stout.

Chin is a teacher with the Delaware Children and Families First Head Start program.

“He loves it,” Chin said. “He loves her and he looks forward to reading with her.”

Stout said she’s learned as much from Aiden as he has from her, she said.

He teaches her all about dinosaurs and marine animals, and he even got her hooked on a Netflix show called “Jurassic World Camp Cretaceous.”

She would binge-watch the show and then discuss what she learned with Aiden during their Sunday calls.

“There’ve been times where it’s not even our scheduled time and I’ll notice that Caribu will notify me that I missed a call from Aiden,” she said.

Stout remembers a time when she and Aiden were close to completing a puzzle together on Caribu.

“We’re close to getting another trophy,” she told him.

It’s moments like that, Stout said, that remind her why she got involved with Read Aloud in the first place.

She does it for the children, but in the end, she comes away from her volunteer experience with a full heart and a sense of purpose.

“When I’m in the daycare, my kids crawl up on me and hug me and tell me they love me,” she said. “It’s just this good feeling that lasts for days afterwards. There’s so much horrible stuff in the world, especially in the last couple of years — and this helps me find my happiness. It feeds my soul to do these things and to be involved with these children and just to see their happiness, well — selfishly, I’m getting quite a bit out of it.”

She doesn’t just do it for the feeling she gets, though.

Stout volunteers with another group called Foster Well where she helps foster families by providing emotional and financial support.

In her own life, she’s seen children be negatively impacted by factors out of their control.

“Anything I can kind of do to add the support system for children or maybe get to them before certain cycles repeat is important to me,” she said. “But Aiden’s mom sends me pictures of him, whether it be of him getting ready on Halloween or his first day of school pictures. It’s almost like they’ve made me feel like a really important part of their lives.”

On Stout’s birthday, she received three gifts from Aiden: a dinosaur mug and coaster, and more importantly, a happy birthday phone call.

Stout and Aiden’s story is just one of many that come out of Read Aloud.

The organization, which was founded in the 1980s by former State Representative Kevin Free, has completed hundreds of thousands of individualized reading sessions with Delaware youth.

“We encourage our readers to participate in what we call dialogic reading, which engages the child and asks them questions about what’s on the page and asks them to expand on what they do say,” said James Spadola, executive director of Read Aloud. “For example, if they see a red fire truck on a page, we ask ‘what does a fire truck do? what color is the fire truck?’”

Spadola believes that by continuing to operate Read Aloud through the pandemic, the group has helped mitigate some of the negative developmental effects COVID has had on children.

“You know, the tough part is, a child’s brain develops the most in the first years of their life, and we can’t make those years up,” he said. “So, I think that by continuing to promote our mission, by continuing to be blessed with such awesome volunteers that continue to do the virtual reading, I think everybody involved can sleep well knowing we’re doing solid work promoting literacy.”

Spadola called Stout a “super dedicated volunteer who is making quite the impact on Delaware children.”

Aiden’s mother said his comprehension and socialization skills have noticeably improved during his time with Read Aloud.

“Aiden is a smart little fella,” she said. “And I’m just really happy that he’s able to have somebody who is willing to read with him and to also give him an idea of how fun reading can be.”

Above all else, Chin wants Stout and the team at Read Aloud to know how grateful she is for their willingness to be a part of her son’s life.

“I just want to say thank you,” she said, noting that she’s always encouraging friends, family and the parents of her students to get their children involved in the program.

Aiden and Stout will have plenty to talk about soon, because the fourth season of “Jurassic World Camp Cretaceous” drops on Netflix on Dec. 3.

To learn more about Read Aloud Delaware or to sign up to volunteer, readalouddelaware.org.