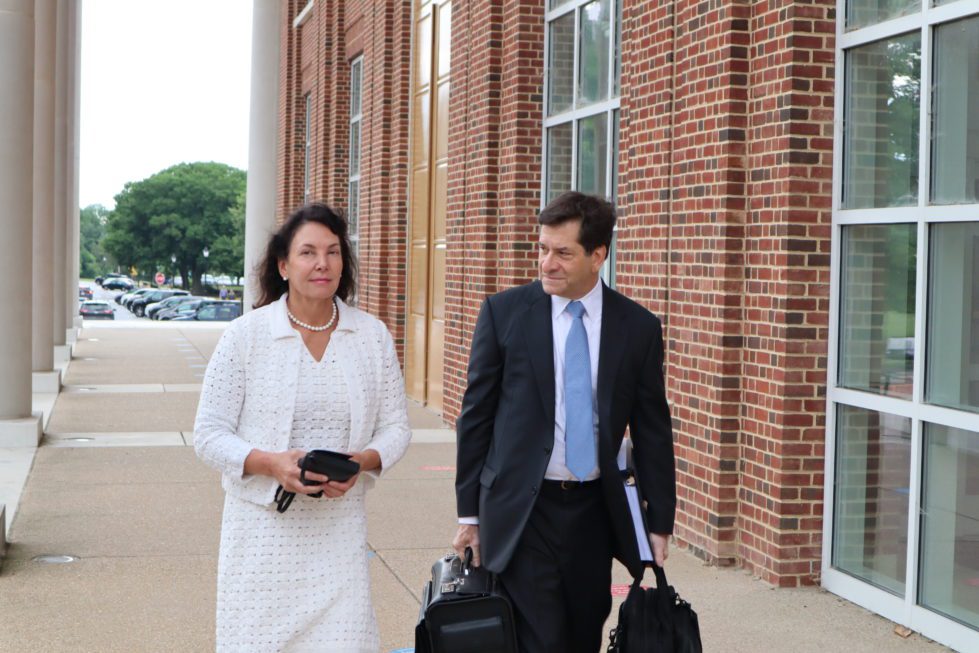 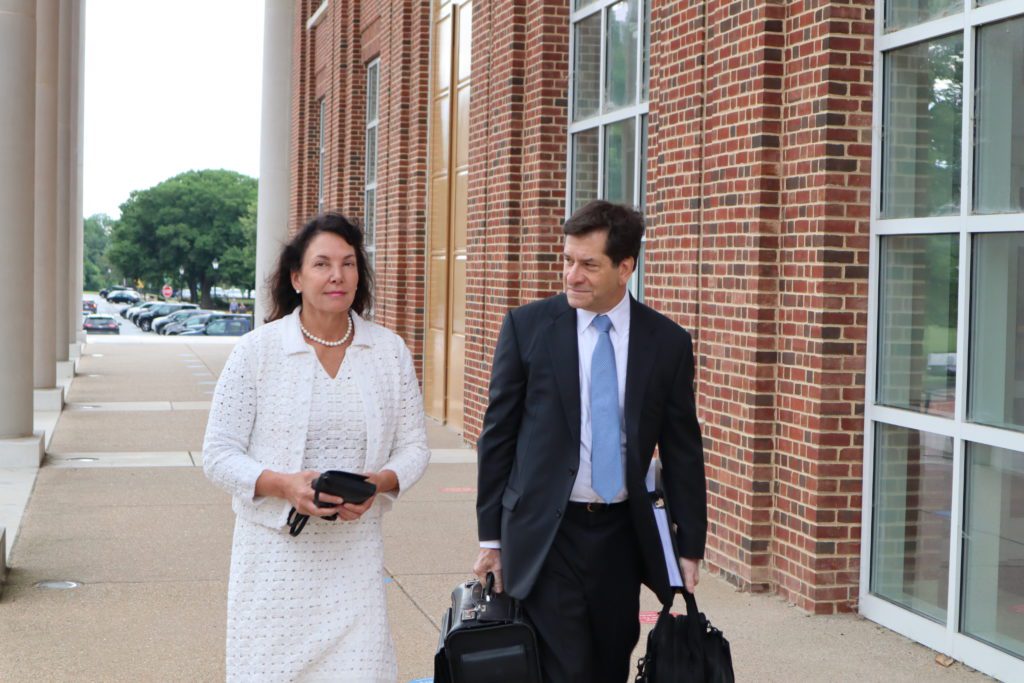 Prosecutors called State Auditor Kathleen McGuiness’ daughter to the stand Wednesday to testify about her employment with the office, her personal bank account and her use of a state-owned vehicle.

Elizabeth “Saylar” McGuiness’ testimony followed that of Christie Gross, a political consultant to whom McGuiness is accused of structuring payments to avoid regulator oversight.

She’s accused of arranging public payments to a campaign consultant to avoid regulator scrutiny, hiring her daughter whose salary was deposited into a jointly-owned bank account, and attempting to intimidate employees who might help investigators looking into her conduct.

Gross, who testified Wednesday morning, is a political consultant who owns two companies with which the Office of the Auditor engaged in professional contracts: My Campaign Group and Innovate Consulting, LLC.

The state alleges that McGuiness’ office intentionally entered into contracts with those companies just beneath a $50,000 threshold that would require a public bidding process.

They also charge that McGuiness paid those contracts in increments of just under $5,000, another threshold above which payments are required to be approved by the state’s Division of Finance.

Under My Campaign Group, Gross billed the auditor’s office for professional services at a rate of $150 per hour.

Those services included communications work and policy advisement, specifically surrounding COVID-19 initiatives and a task force of auditors’ offices from around the country aimed at tracking federal COVID relief funds.

Some payments to My Campaign Group were paid out of the office’s general fund and others out of a COVID relief fund, Gross said, because her work on COVID initiatives met the requirements to be paid with those funds.

Though the payments appear separate in the state’s financial records, Gross said she always received individual payments, even if the funds were derived from multiple sources.

In fact, many of those payments were scrutinized and approved by the Division of Finance, a fact unveiled earlier in the week.

On one occasion, Gross was owed a past-due balance for her final month of work in the auditor’s office. McGuiness directed that $1,950 payment be issued through PayPal using a state credit card, which it was.

Gross detailed an email from Deputy Attorney General Patricia Davis and the office’s then-Chief of Staff, Thomas Van Horn, which said that tracking COVID-relief funds wasn’t the responsibility of the auditor’s office.

She said Gov. John Carney and Attorney General Kathleen Jennings were attempting to push back on McGuiness’ attempts to track relief funds.

Gross also said Van Horn, McGuiness’ former chief of staff, was engaged in a sexual affair with a subordinate staffer.

Gross informed McGuiness of the affair and said McGuiness notified the attorney general’s office, but McGuiness did not fire Van Horn right away, something Gross disagreed with.

For the most part, Gross said, Van Horn’s attitude and actions, as well as McGuiness’ delay in terminating his employment, were the reason she believed the office to have a “toxic culture.”

Fearing that the name My Campaign Group could draw undue attention to McGuiness, when the first contract maxed out, Gross signed a second contract under a newly-formed LLC named Innovate Consulting at an hourly rate of $200.

That contract only lasted from Sept. 2020 until Feb. 2021, at which point Gross became frustrated with Van Horn and others and decided to move on. 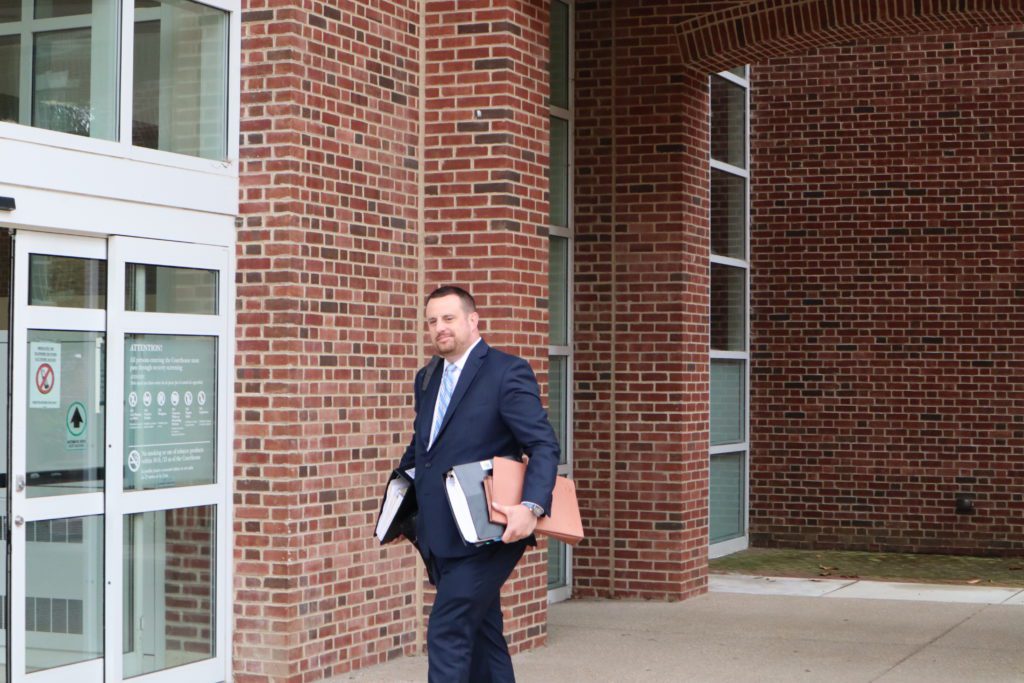 After lunch, prosecutors called on Saylar McGuiness, the auditor’s 20-year-old daughter who works part-time in McGuiness’ office to this day.

Prosecutors played a recording of a Sept. 2021 phone interview between Saylar McGuiness and a Department of Justice investigator.

The investigator, who was not present during the trial, asked Saylar McGuiness about her work in the office, her use of a state vehicle, and the ways she performed work while away at school.

Saylar McGuiness told the investigator — and the jury Wednesday — that she never billed the state for hours she didn’t work, that she drove her mother to work in the state vehicle, and that she worked remotely using applications like Canva and Buffer, which didn’t require VPN access.

There were some very minor inconsistencies between her phone conversation and her testimony during the trial, which she attributed to the phone call taking place the day after the Firefly Music Festival.

As an example, the investigator asked during the phone call whether Saylar McGuiness used her personal cell phone or a state cell phone for her work in the auditor’s office.

She said she didn’t use either, but explained in trial that she thought he was asking whether she used her phone to make and receive official phone calls.

In actuality, Saylar McGuiness said, she communicated with supervisors frequently about work assignments via text message.

She said she was terrified by the call and worried the Department of Justice was investigating her, not her mother.

A great deal of time was spent discussing Saylar McGuiness’ work at the Delaware State Fair, during which she exceeded the part-time weekly maximum of 29.5 hours of work.

To be compensated for the work, the part-time employees “banked” their hours, meaning they billed them for a week during which they didn’t reach their maximum hours so they could still be paid.

Saylar McGuiness also testified that she rarely drove the state vehicle, but when she did, it was only to chauffeur her mother to and from work and events.

The car, she noted when prompted by defense attorney Steve Wood, isn’t a stretch limo, a “Cadillac or a Mercedes or a BMW,” it’s a standard Chevrolet SUV.

Wood later introduced a large stack of emails to and from Saylar McGuiness, including ones in which she was assigned work and others in which she delivered on her assignments.

She was asked about her personal bank account into which her salary was deposited. Kathy McGuiness is also named on that bank account.

Saylar McGuiness said she’s had the account since she was 10 years old and as most kids do, she needed her mom as a co-signer.

If found guilty, McGuiness faces between zero and 13 years in prison.

Wednesday marks the fifth day of the trial. Prosecutors will continue to call witnesses Thursday. It’s not clear how many witnesses the state has yet to call. Once the prosecution rests its case, McGuiness’ defense team will have the opportunity to call witnesses.

The trial marks the first time in Delaware history that a statewide-elected official has stood trial while in office.