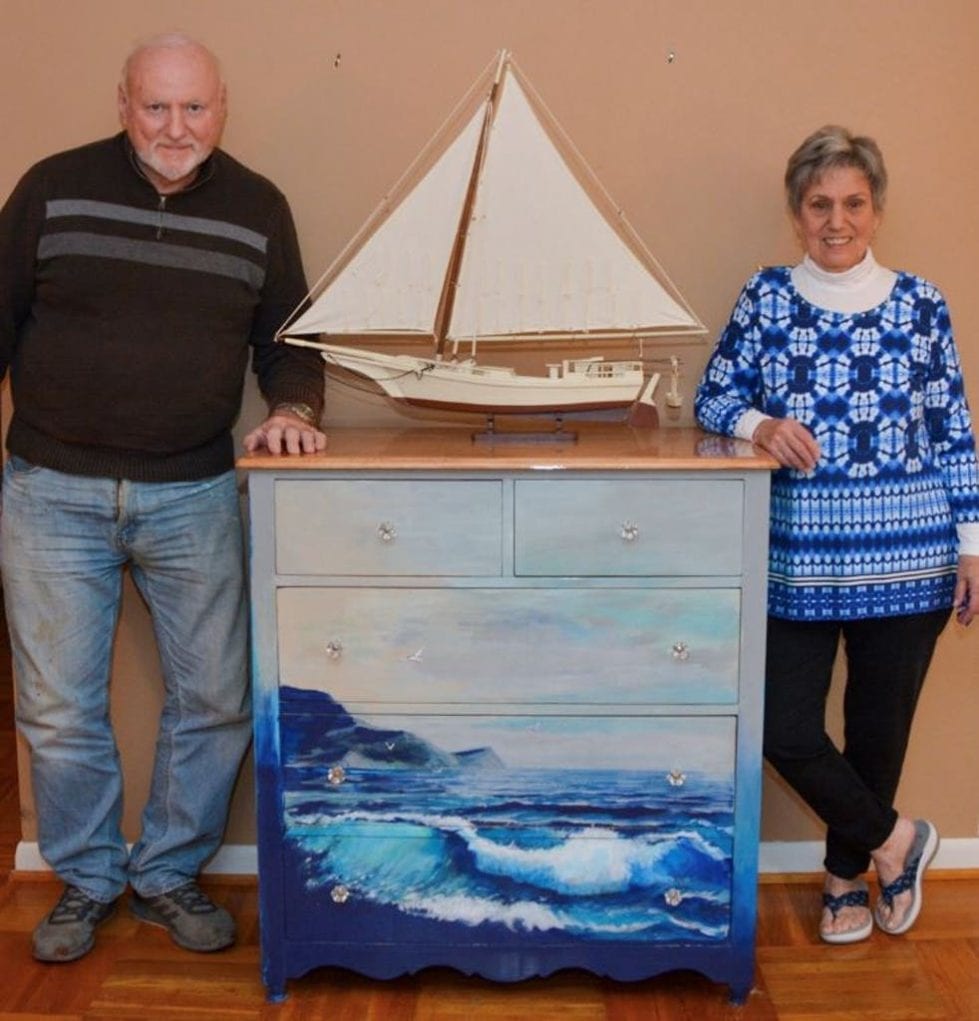 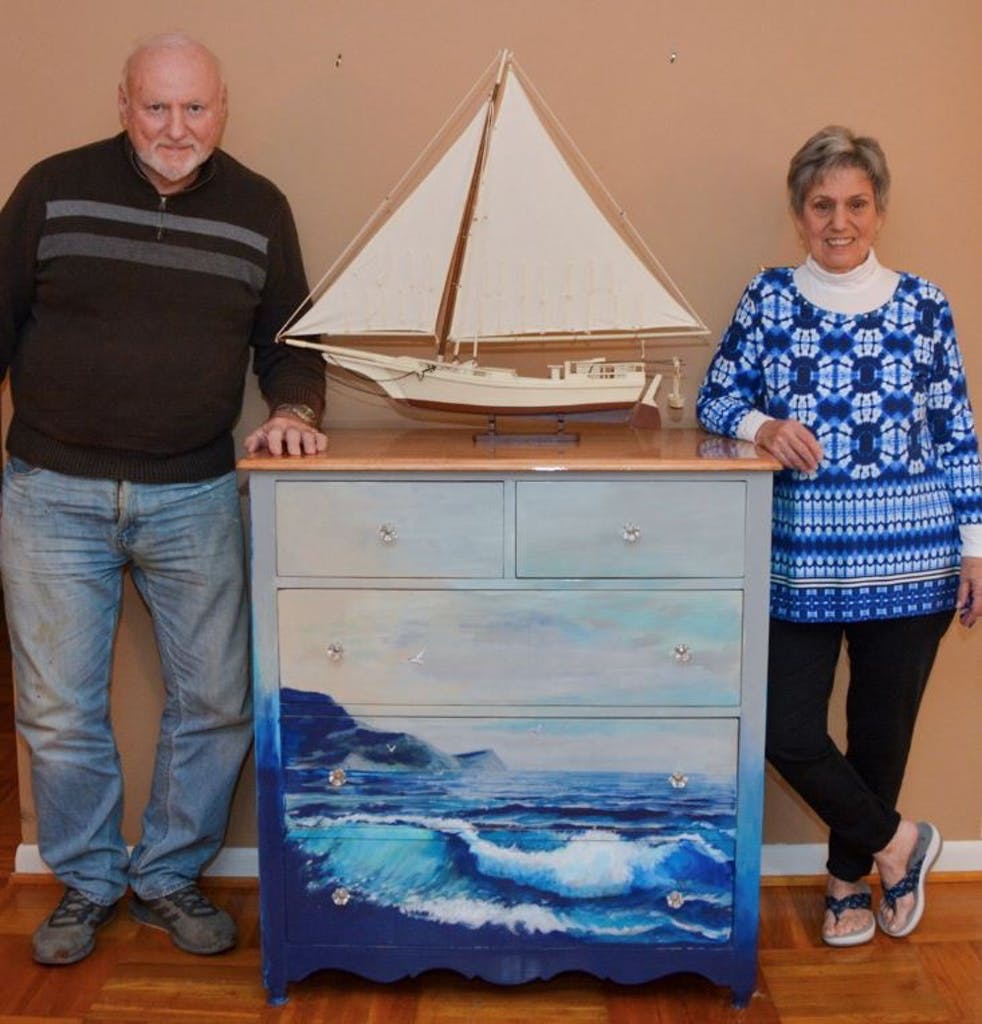 Since so many of us have nothing but extra time at home on our hands, this year’s spring cleaning might be a bit deeper and more diligent than in the past.

Perhaps you’ll finally tunnel through the cobwebbed furniture sitting in the basement. And if you find something interesting? We know just the woman to send it to.

Wilmington’s Ruth Govatos may be a Patterson Schwartz real estate agent by day, but in the evening, you’ll find her either researching the latest in fusion mineral paint, hand-sanding furniture or working in tandem with pal Jerry Becker, a retired Concord High art teacher, as they finesse a whimsical transfer onto a once-forgotten antique piece.

In the 1950s—light years before Pinterest and Magnolia Market—Govatos watched as her mother worked hard at the family restaurant, Claymont’s The Pantry, before retiring to the eatery’s basement in the evenings to work on upcycling furniture.

“This was before it was a trendy thing to do,” Govatos says. “She was refinishing furniture because she had inherited a basement full and intended to use it at the new beach house she and my father had just purchased.”

While Govatos says she wasn’t overly artistic growing up, she was drawn to creative pursuits. She studied photography; she plays the piano. But when she inherited a few pieces of her own from relatives a few years ago, she flashed back to her mother lovingly laboring over her own projects and thought she’d give refinishing furniture a try.

“I thought I could maybe just pick it up,” Govatos says. “I started looking online at different ways to do it, and that was the first time I’d ever heard of chalk paint. Then I discovered transfers, which are these beautiful images you could put on. So I thought, ‘Okay. Let’s try this.’”

Her first piece was “The Gypsy Queen.”

“I loved it so, so much,” Govatos says. “But I had obviously done something wrong, because the transfer began peeling off. I was so disappointed but refused to give up on it. So I stripped it all the way back down and started all over again.”

“Being completely self-taught, there’s always more to learn, more to research and more to understand,” she says. “But I’d say by now I have the basics down.”

But that doesn’t mean there weren’t more learning moments along the way. Like the time she accidentally allowed rain to warp the top of a dresser she scored for $10, which caused her to have to buy an entire new top and start again.

The project later emerged as a gorgeous, Art Deco-inspired nautical dream piece, with waves that look almost real as they ripple and crest across the drawers.

“That was all Jerry,” notes Govatos. “Once I put the transfer on, I asked him to enhance it with his paint brush. It turned out so beautiful.”

Fans of curated bottle shop Swigg will find her art near the tasting table: Her nephew, David Govatos, owns the place. But other than that, Govatos doesn’t work that hard to put her pieces out there.

“Is there even a market for it? I don’t know,” she says. “I do it because I want to, and when I want to. It really gives me such great satisfaction. Would it be nice if it actually made me some money? Sure! But the problem is, after I finish each piece, I look at it and decide I can’t bear to part with it.”

Right now she’s working on a 1930s-era bench that she’s reimagining in blacks and vibrant golds; after that, she hopes to move on to the project that’s been tantalizing her for a few months: another 1930s piece, this one a Lane cedar chest.

“It’s got these beautiful carved designs,” Govatos says. “I can’t wait to get my hands on it.”

Working out of her basement studio, you’re much more likely to find Govatos going old-school by hand-sanding a piece, even though she just got a brand new toy—an electric sander.

“But I can’t get the bag to stay on, and it’s making a mess,” she says, laughing.

While this isn’t a trade she’s picked up due quarantine, she’s enjoying the extra stretches of time the national slowdown has afforded her, even if it just means spending more time online looking at the work of her counterparts.

“Even though I’m self-taught, I really think I have a pretty good sense of design, and what looks good,” she says. “Some of it, for me, is overdone. Sometimes less is more. You have to be careful you don’t go absolutely crazy with all the possibilities.”