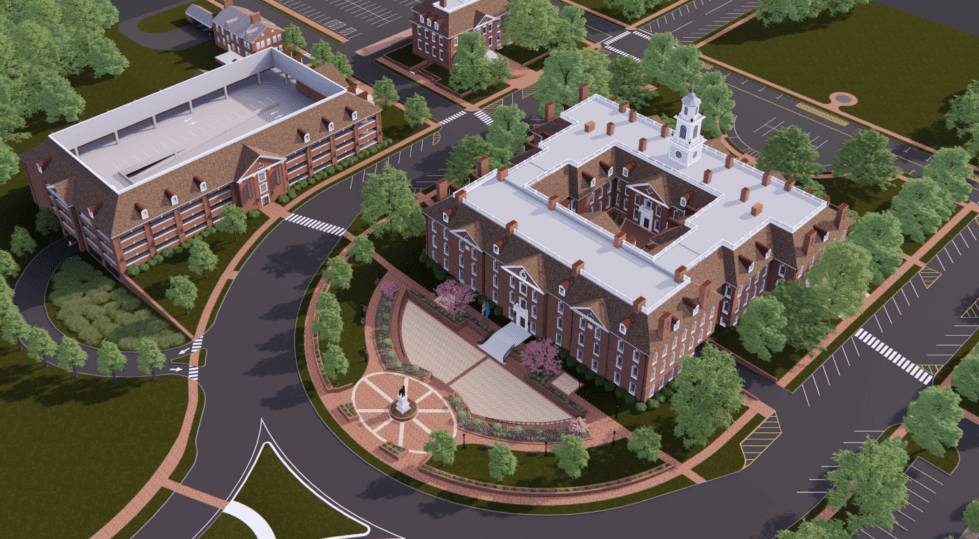 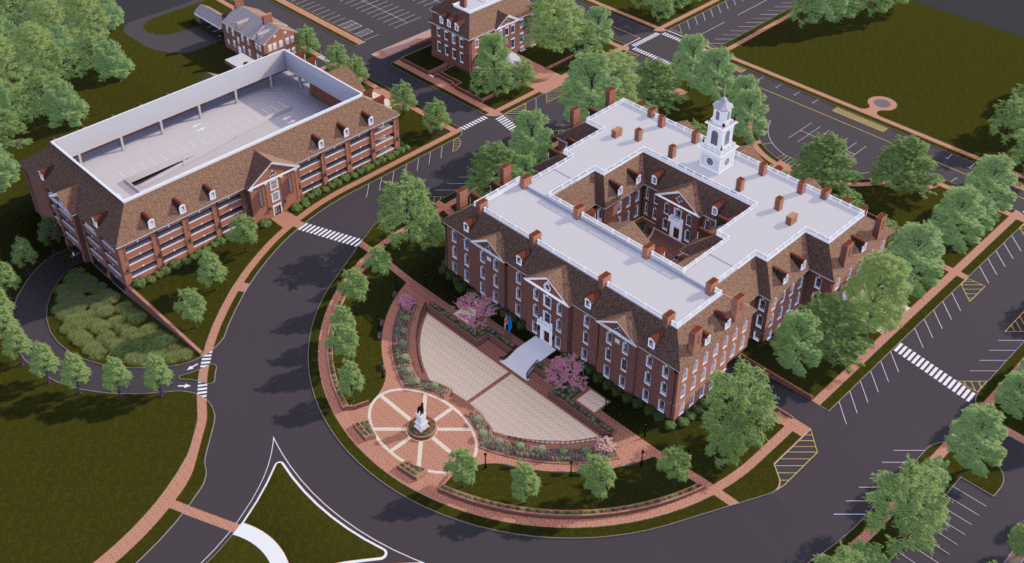 Delaware’s state capitol building could be set for a major expansion.

A bit of background: Between 1791 and 1933, Delaware’s General Assembly met in the Old State House, just down the road from the current capitol building, known as Legislative Hall.

After 224 years of continuous use, the Old State House became cramped and uncomfortable, unable to meet the needs of the burgeoning state government.

It appears now, after 89 years in the new building, lawmakers feel Delaware’s government is once again in need of more space.

While the details are slim and a budget has yet to be drafted, concepts and 3D renderings offer Delawareans a glimpse into the possible future of 411 Legislative Avenue. 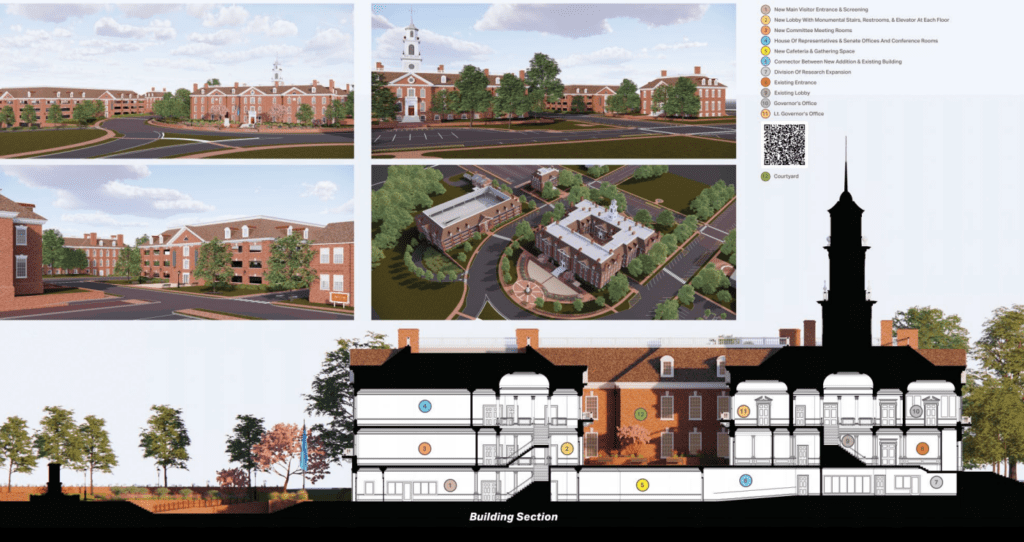 A $100 million-plus tentative plan — which is only at the feasibility study stage — includes a four-level 350-spot parking garage with an underground tunnel beneath Martin Luther King Jr. Boulevard for lawmakers and staff to securely access the building from their vehicles.

A massive new wing would double the size of the current building and include space for legislative offices, a secure courtyard and larger House and Senate chambers.

A reconfiguration of the existing building would allow for a new cafeteria, enhanced security checkpoint, gift shop, bathrooms, offices, storage space and more.

“I don’t know if there was a particular budget in mind and really that’s not how you want to do a feasibility study,” said Philip Conte of architectural and engineering firm StudioJAED.

“We did it methodically,” he said. “We identified the needs, we talked to the end users and the agencies on how we could develop a solution to satisfy those needs.” 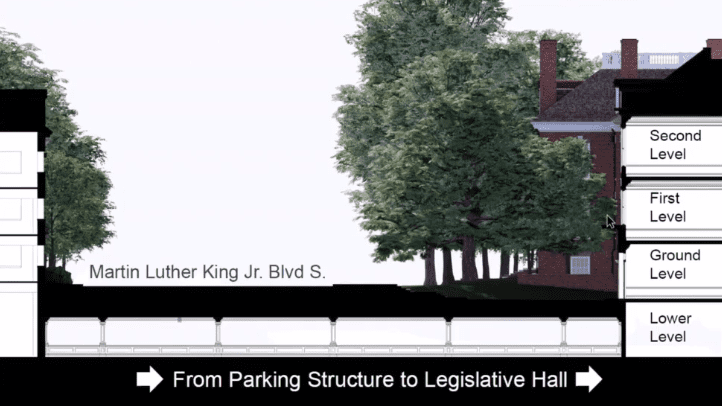 RENDERING OF THE PROPOSED SECURE TUNNEL FROM PARKING GARAGE TO LEGISLATIVE HALL PRESENTED TO THE LEGISLATIVE BUILDING COMMITEE BY STUDIOJAED.

Assuming preliminary funds are allocated and lawmakers are able to agree on a plan by early 2023, Conte anticipates a project completion date of Dec. 2027, he told the Legislative Building Committee Thursday.

“In order to meet this schedule, which shows a total completion at the end of Dec. 2027, we would suggest that a design team and construction manager be brought on board and have a kickoff meeting by the end of this year or beginning of next year,” he said. 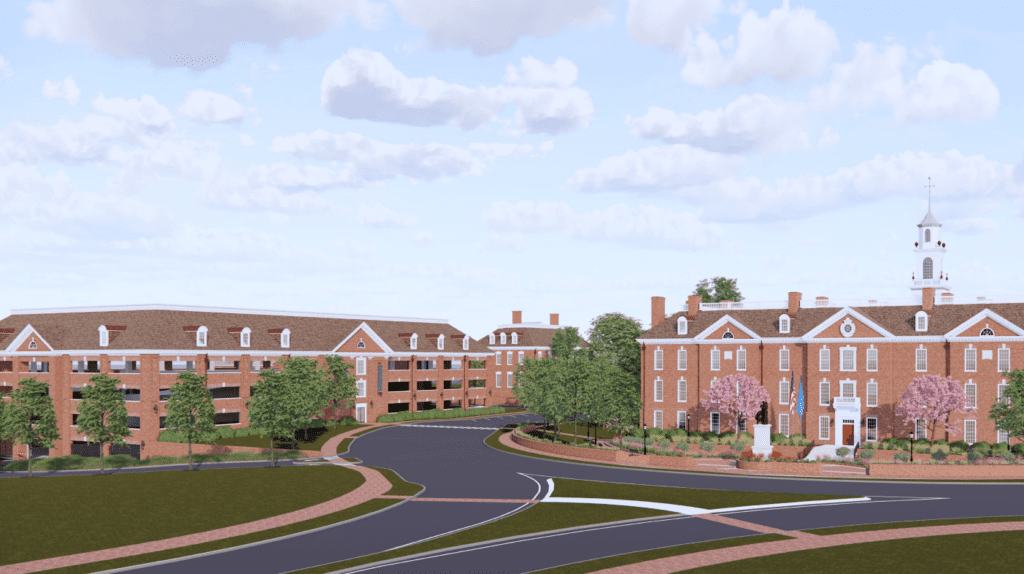 Conte characterized the expansion as a “significant public works project” and said the Legislative Building Committee will have to agree on a set of guiding principles.

Among those principles, he said, are limiting disruption to the building’s occupants while maintaining a safe and secure campus, maintaining egress and accessibility for all functions and spaces, and communicating with stakeholders, including lawmakers, employees, the City of Dover, taxpayers, Capitol Police and more.