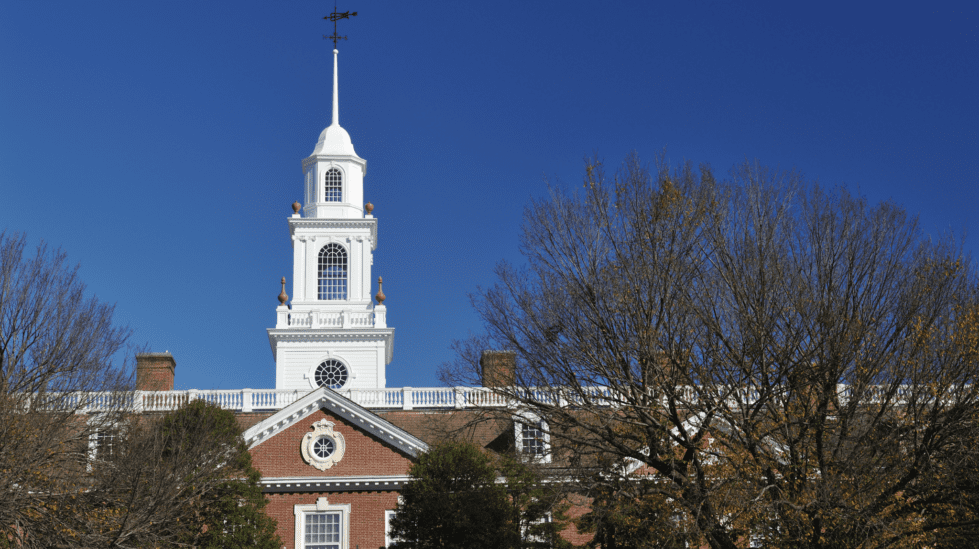 State legislators will be back in session in a little more than a month. Photo by Aimintang/Getty Images Signature

In five weeks, Delaware’s 151st General Assembly will kick off its 2022 legislative session with many Democratic legislators looking to advance progressive causes that have previously struggled to gain traction.

Democrats control both chambers of the General Assembly by wide margins.

There are 26 Democrats in the House of Representatives, compared to just 15 Republicans. In the Senate, Democrats hold 14 seats while Republicans hold 7 seats.

Some of the issues likely to come up during the next session, which begins Jan. 6, include cementing the permanent use of mail-in voting, recreational cannabis legalization, paid family and medical leave, police review boards and changes to the law enforcement officers’ bill of rights.

Lawmakers are also expected to learn more about their role in removing or suspending indicted-Auditor of Accounts Kathy McGuiness. One proposal that has earned support in the wake of the McGuiness arrest is a push to create a statewide inspector general’s office.

Two major gun control bills that didn’t reach the finish line in 2021 are likely to be wrapped up during the upcoming session. Only one new gun bill has been filed as of now and it’s sponsored by a Republican.

Technically, the General Assembly is only in recess at the moment. Each session lasts two years, with the current one spanning from 2020 to 2022.

Bills filed in 2021 may still be brought to a vote when the legislature reconvenes, but bills that are filed and do not receive a vote in 2022 will have to be refiled in the next General Assembly.

Meanwhile, legislative leaders announced Wednesday that committee hearings will be held in a hybrid format, with legislators attending in-person and members of the public having the opportunity to watch and provide comments online.

But in a press release announcing the move, House and Senate leaders stopped short of inviting members of the public to attend committee hearings in-person.

That, they said, “will depend on the public health guidance as of early January.”

In June, Republicans in the General Assembly effectively stopped the passage of a bill that would have made no-excuse absentee voting in Delaware permanent.

House Bill 75, sponsored by Rep. David Bentz, D-Christiana, would have allowed Delaware voters to request mail-in ballots during all future elections without providing an explanation.

But the bill, which seeks to amend the Delaware Constitution, failed to receive the required two-thirds majority needed in the House of Representatives.

Because she switched her vote from ‘yes’ to ‘no’ at the last moment, Rep. Valerie Longhurst, D-Delaware City, could attempt to revive House Bill 75 during the upcoming session. Democrats would need to earn just two Republican votes in order to pass the bill with a two-thirds majority.

If House Bill 75 does not pass in 2022, it will have to be reintroduced during the next General Assembly and subsequently pass during two legislative sessions. That would delay the implementation date for no-excuse absentee voting by at least three years.

House Bill 150, a bill that would legalize, regulate and tax recreational cannabis in Delaware, made it through two House committees in 2021.

The legislation, sponsored by Rep. Ed Osienski, D-Newark, was expected to be put to a vote in June, but in a signal that Osienski had not yet secured the necessary votes, the bill was tabled.

Passage of House Bill 150 requires a three-fifths majority in both chambers of the General Assembly, which Democrats have.

If Democrats elect to unite around the cause, they could end cannabis prohibition in Delaware without a single Republican vote — or, at least, place it in Gov. John Carney’s hands.

Carney has made his position clear: he does not support marijuana legalization.

In June, according to The News Journal, Carney refused to say whether he would veto House Bill 150, citing his attempts as lieutenant governor to “get Delawareans to stop smoking.”

Some speculate that opposition to cannabis legalization in the General Assembly comes, at least in part, from a desire to avoid forcing Carney into the awkward position of vetoing a bill with such broad public support.

A 2018 attempt at cannabis legalization earned the support of Republican Rep. Jeff Spiegelman of Clayton.

Rep. Ruth Briggs-King, R-Georgetown, has also filed two amendments to House Bill 150, signaling that she may support the bill with some changes.

A bill to give Delaware workers up to 12 weeks of paid family and medical leave has earned the support of some lawmakers, business owners, medical professionals and nonprofit advocates.

But some business leaders fear a state-run paid leave program would be overly burdensome on already-struggling small businesses.

Senate Bill 1, sponsored by Sen. Sarah McBride, D-Wilmington, would create a statewide paid family and medical leave insurance program that workers could access for qualifying events, including addressing a serious illness, welcoming a new child or helping adjust to a recent military deployment.

Workers benefitting from the program could receive up to 80% of their average weekly wages, insofar as that amount does not exceed $900 per week.

The program would be funded by a 0.8% contribution from an employee’s weekly pay, to be split evenly between the employee and employer.

For a worker making $1,000 per week, for example, the employer and employee would each contribute $4.

In its current form, Senate Bill 1 exempts small businesses with 20 employees or less from the employer contribution, though the employee would still have to pay their share.

McBride has engaged in a series of roundtable discussions on the subject, inviting business leaders, medical professionals and nonprofit representatives to share their thoughts on the subject.

Because the program would be funded from an additional payroll tax, the bill will require a three-fifths majority in both chambers to pass. Again — Democrats alone have the votes to pass the measure.

Not unlike McBride’s efforts to generate support for her paid family and medical leave bill, Sen. Tizzy Lockman, D-Wilmington, has engaged law enforcement officers, union leaders, advocates and families affected by police misconduct in a series of roundtable discussions on the subject of police reform.

Lockman’s Senate Bill 149 would allow members of the public and media access to police misconduct records that are currently kept secret under the state’s Law Enforcement Officers’ Bill of Rights.

Police records would also be able to be used in court proceedings and police agencies would be barred from destroying or discarding those records.

Complaints against officers, including their names and details of any disciplinary actions, would be made available to the public.

The proposed law was introduced as part of the Delaware Legislative Black Caucus’s Justice for All agenda, which was introduced in the wake of the May 2020 murder of George Floyd in Minneapolis and subsequent nationwide unrest.

A months-long Law Enforcement Task Force that met during the General Assembly formulated a list of policy and other recommendations, many of which have earned support from police groups.

But the civilian review boards and changes in the Law Enforcement Officer Bill of Rights have not.

In an attempt to better understand its role in addressing the indictment of State Auditor Kathy McGuiness, the General Assembly has retained Supreme Court Justice Randy Holland as “special advisor.”

A statement from the House and Senate Democratic Caucuses announcing Holland’s role called him “one of Delaware’s most respected Constitutional authorities.”

Holland is the longest-serving Delaware Supreme Court justice in history. He is providing his services free of charge.

Democratic leadership has set a Jan. 11, 2022 deadline for the legal review process’s findings to be finalized.

Article III, Section 13 of the Delaware Constitution says that the governor may “for any reasonable cause” remove any officer of the state government, except the lieutenant governor and members of the General Assembly, upon the request of two-thirds of all the members elected to the House and Senate.

Senate and House leadership, with Holland’s assistance and the input of House and Senate Judiciary Committee members, have spent weeks preparing findings and recommendations with Holland’s guidance.

“The provisions of the Delaware Constitution related to removing an elected official from office have serious legal ramifications,” Holland said in a press release announcing his retention. “I understand the gravity of what is being asked of me, and I am prepared to work impartially with the legislature to help forge a better understanding of case law, and the legislative record so the General Assembly has the information needed to make an informed decision about its path forward.”

Meanwhile, Democratic leadership in both chambers have reiterated their calls for McGuiness to take a voluntary leave of absence, saying that “potential conflicts of interest that will likely arise if the Auditor continues to actively serve in her elected financial watchdog role while facing criminal charges related to alleged abuses of those powers.”

McGuiness has rejected those requests through her attorney.

It is possible that the General Assembly could request Gov. John Carney remove McGuiness from office at the beginning of the upcoming session.

Rep. John Kowalko, D-Newark, will introduce legislation during the upcoming session to set the framework for the establishment of a statewide inspector general’s office.

The office would be tasked with investigating instances of waste, fraud, abuse and mismanagement within the state government. It would also seek to root out inefficiencies within government and streamline processes and practices to save taxpayers money.

Kowalko said he expects that the office would require an annual budget of around $2 million to meet its goals.

The proposal appears to have gained the support of the Senate President Pro Tempore, Sen. Dave Sokola, D-Newark.

Two major bills to create a permitting process to purchase firearms and banning large-capacity magazines are likely to be finalized during the upcoming session.

Senate Bill 6 — the bill banning magazines that carry more than 17 rounds of ammunition — passed in the Senate in June, but when it arrived in the House, an amendment was introduced. The bill passed as amended and returned to the Senate, where it has yet to be considered.

Senate Substitute 1 for Senate Bill 3, which would require Delawareans to obtain a permit before purchasing a handgun, passed in the Senate and was sent to the House, where it was released from the Judiciary Committee. It faces one more hearing by the Appropriations Committee, and if released, will be voted on by the full House.

That law criminalizes the sharing of information in the form of self-manufactured gun blueprints, schematics and 3D printing files.

While some expect Democrats to introduce additional bills relating to semi-automatic weapons and stand-your-ground laws, none have been filed as of yet.

The only new gun bill relating to guns is sponsored by Rep. Jeff Spiegelman, R-Clayton, and seeks to remove BB guns from the definition of “firearm” within the Delaware Criminal Code. This would align the state’s definition with that which exists in the federal criminal background check law.

That bill has been assigned to the House Judiciary Committee for review.

With nearly every high-priority issue for Democrats, the party has enough votes to pass their key agenda items without Republican support. The question remains, will Democrats be their own worst enemy in the upcoming legislative session?

Updated: An earlier version of this report incorrectly suggested that SB 6 and SS1 for SB 3 had already received their final votes in both the House and Senate.