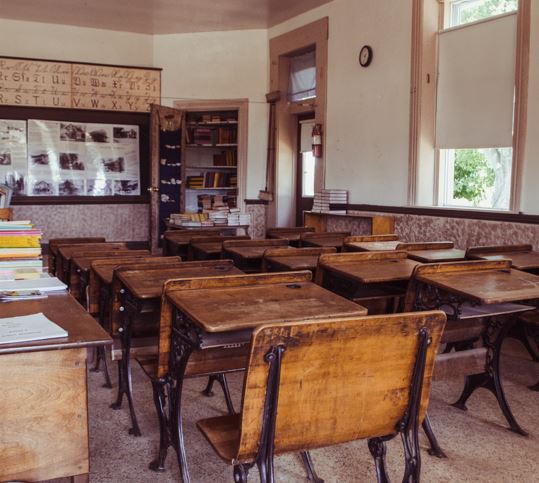 A group of parents who oppose the school mask mandate are working on creating a coalition of homeschooling options that essentially would work like a series of one-room schoolhouses. Photo by Meg Bouldon/Unsplash

A group of Delawareans upset about the state’s school mask mandate are working to create alternative education methods for students.

The group hopes to build coalitions of parents, retired teachers and experienced homeschoolers to offer learning pods, micro-schools and tutors.

“Essentially what we’re organizing right now and looking at bringing back is the one-room schoolhouse,” said James Davidson of Patriots for Delaware.

He said the organizers thought they could ready to go before schools start.

Learning pods and microschools aim to allow parents to be more selective with regard to curriculum and teaching methods without fear of hampering students’ social development.

Matthew Burrows, superintendent of the Appoquinimink School District, said a parent at an Appo school board meeting mentioned starting the school year that way, and then bringing the  children back after Sept. 30. That’s the cut-off date for per-pupil state financing for schools. The state portion of school funds is not raised again during the year.

Doing that would hurt all kids, Burrows said, because classroom sizes are funded and based on the number of kids expected. School systems spend the summer trying to be accurate about who is coming and what they can expect financially.

Children who come to school after Sept. 30 would find themselves in classrooms that were set up for a smaller group, he said. Because no more state money is available then, any additional expenditures would have to all come from local taxpayer dollars rather than the state paying its portion, he said.

“In the end, my concern is just with the kids,” Burrows said. “We want the kids get a high quality education, to have interaction with other kids. Finances aside — and they are important. You need the finances to make school operate, but our number one priority is the kid.”

He said many children thrive with homeschooling, just like some children thrived with virtual learning. Parents will want to be sure their kids are getting a quality education.

“Most kids need to be in person and have that interaction and be in the classroom,” he said.

Jon Starkey, spokesman for Gov. John Carney, said, “The governor’s top priority is getting all Delaware students back in their classrooms full time this fall.”

Patriots for Delaware describes itself as a non-partisan coalition whose members believe in constitutional values and family. Many members complained when schools were shut down in 2020-21 because of COVID-19. Now some would prefer their kids not go to school at all rather than go to school masked.

The group is coordinating with parents, retired teachers and experienced homeschoolers to provide alternatives to public and private schools.

“We’re going to be giving alternative options from Christian schools and private schools, all the way through to just homeschooling your child by yourself,” Davidson said.

The organization hopes to reassure interested parents that homeschooling is a viable option.

“We’re also trying to help connect the dots between families so that they can homeschool as a family,” Davidson said. “We’ve also got some teachers that are interested in doing tutoring lessons and teaching multiple kids for parents that need to work, let’s say, five days a week, so they can still go to work as normal, and these teachers can take in and teach their kids.”

The efforts are not only for those who oppose mask mandates, but also for parents who are no longer comfortable with the centralized educational system, he said.

Davidson said the group is compiling information on openings in private and parochial schools to save parents time in transitioning their children away from the public school system.

“We’re just trying to connect the dots and help parents feel comfortable with the possibility of pulling their kids out of public school,” Davidson said. “That’s all we can do.”

The efforts come as some parents say public school systems have been unwilling to stand up to the state government and fight for their children.

Numerous school board meetings have been disrupted in recent days by parents who oppose the governor’s school mask mandate.

“We should not be having to do this,” Davidson said. “Our local school boards should be standing up and should be fighting the edict that came down, but they’re not.”