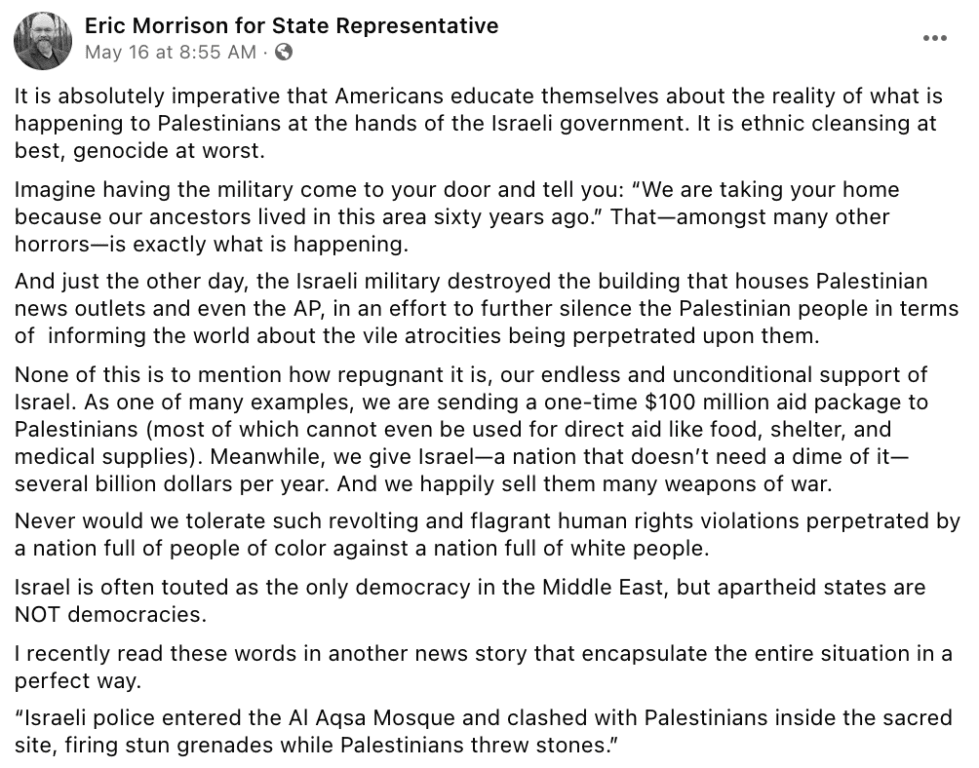 In a May 21 open letter to Rep. Eric Morrison, D-Glasgow, the 10 rabbis and five other leaders singled out his May 16 Facebook post, in which he calls attacks in Gaza “ethnic cleansing at best, genocide at worst.”

Morrison said he Monday evening that he received the letter by email that morning and stands by what he said in his social media post.

The Jewish leaders start their letter saying they mourn the death of Jews and Muslims alike in the Gaza conflict and point out that the area is important to Judaism, Islam and Christianity.

They tell Morrison they don’t believe his statement was written with thoughtful consideration of all the ethnic, religious and cultural groups  involved. The point out that only 75 years  ago, 6 million Jews were victims of ethnic cleansing and genocide at the hands of Hitler’s Nazi  Regime.

“Accusing  the victims of the single worst (by number of victims) genocide in history of perpetrating  genocide is probably the single most hurtful allegation you could level against Jews,” the letter says. “Doing it in the context of a dispute about property and the eviction of one family – not systematic mass  murder – makes the charged word choice all the more painful.”

“Never would we tolerate such revolting and flagrant human rights violations perpetrated by a nation full of people of color against a national full of white people,” Morrison says in the Facebook post, one of his many on the topic. In another post, he sites a news story that says progressive Democrats are pressuring the Biden administration to support Gaza.

The letter says more than 50% of the Jews living in Israel are Ethiopian or from the same Middle Eastern countries as the Arabs that Morrison is equating as “people of  color” and that 20% of Israeli citizens who are Muslim Arabs who vote and serve in Israel’s legislature and Supreme Court.

Morrison said he has responded to the letter with an email and sent a copy of it.

“I do not support the genocide or suffering of any people,” he said in his response. “And that is why I believe the Israeli government should stop its campaign of taking more and more land from Palestinians to which is simply is not entitled, and forcing those Palestinians to live in sub-human conditions. That, in the end, is what continues escalating this crisis.”

Morrison said it is important to separate peoples from governments and organizations.

“As I’m sure you recognize,” he wrote, “they are not the same. Governments and organizations often do terrible things in the name of the people they represent, but many of those people do not support those governments or organizations.”

Morrison said 2.2 million people have been pushed into Gaza, which is 140 miles square. They have no freedom of movement and little safe drinking water.

Morrison called Israel’s attacks on Gaza disproportionate to anything Hamas, a Palestinian group devoted to overthrowing Israeli control, could do and that targeting and destroying buildings were war crimes.

The Jewish leaders’ letter said: “Given the depth of feelings on both sides of this conflict among  Delawareans and a widely different understanding of the facts, we would welcome a dialogue  with the Delaware Jewish community. In the meantime, we welcome the ceasefire after 11  days of conflict and hope for a peaceful resolution to the benefit of all of those who hold the  Holy Land sacred.”

Morrison responded, “I very much believe in communication and open dialogue. I’m happy to meet with any leader of Delaware’s Jewish community to discuss this situation.”

He also said, “I want peace in this conflict as much as anyone. But it will never be achieved until we are completely honest with ourselves about the reality of the conflict — included the immense suffering and egregious human rights violations Palestinians have endured for decades.”