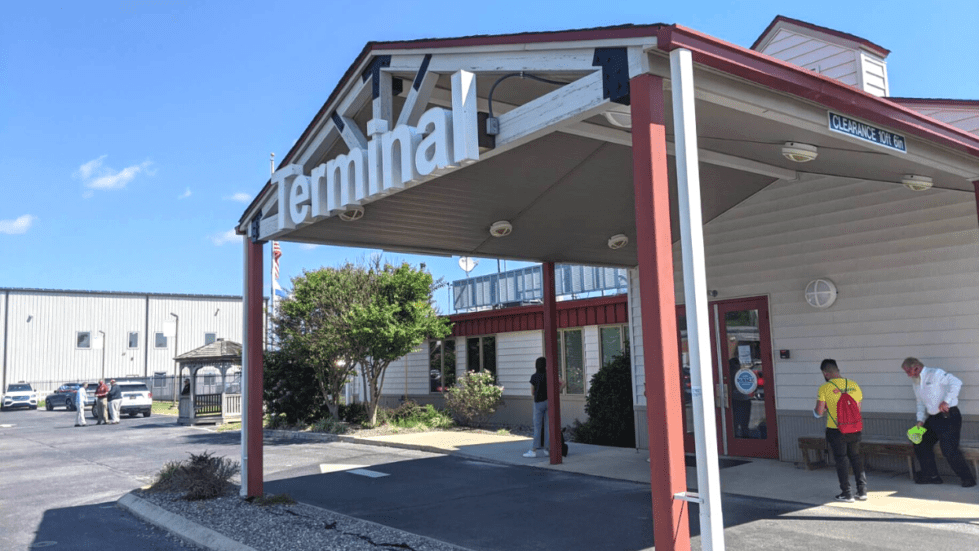 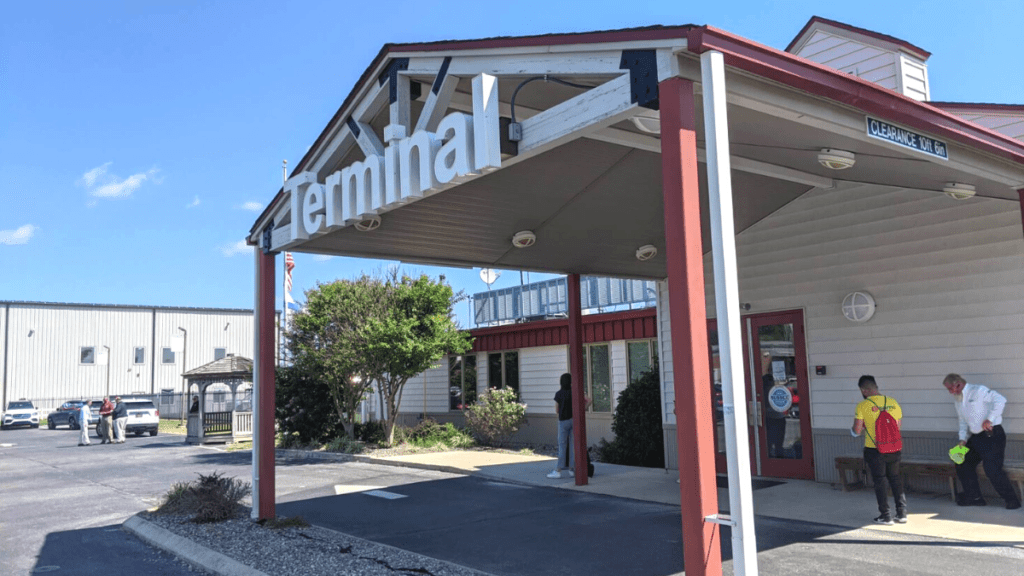 A flight presumed to be carrying undocumented immigrants was scheduled to land in Georgetown Tuesday, but appears to have never taken off. (Andrew Sharp)

On Tuesday, it appeared to be happening again. A Fairchild Dornier 328JET — the same type sent to Martha’s Vineyard — was set to take off from East Texas Regional Airport in Fairview, Texas at 6:58 a.m. CDT.

But according to flight tracking software Flightradar24, the plane didn’t take off until 1:30 p.m.

From East Texas Regional, it was scheduled to fly to Kelly Field in San Antonio, Texas, presumably to pick up the immigrants, then depart for Bob Sikes Airport in Crestview, Florida before heading to Georgetown.

The plane didn’t end up flying to San Antonio — it went to Nashville, Tennessee. East Texas Regional’s airport director, Roy Miller, said he believed the plane was going to be “crew-only,” meaning there would not be additional passengers on board.

For that reason, unless the plane picked up passengers in Nashville (which did not see any arrivals Tuesday from San Antonio, or anywhere in Texas) it’s unlikely to have had undocumented immigrants on board. 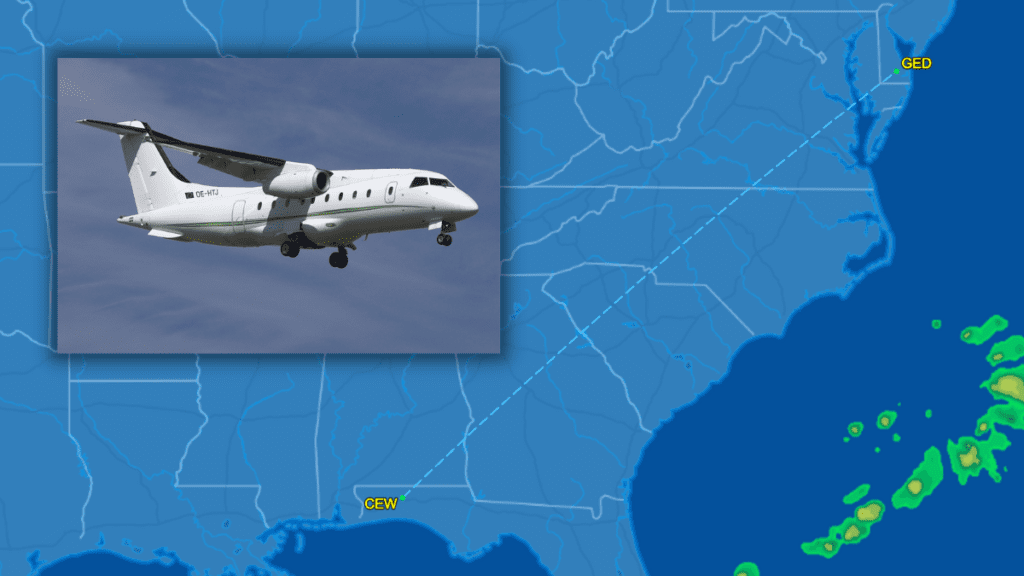 A Fairchild Dornier 328JET Twin-Jet from Texas via Florida had been scheduled to land at Georgetown’s Delaware Coastal Airport Tuesday, but it went to Nashville instead. (FlightAware)

Nevertheless, Gov. John Carney’s office says it continues to prepare for the possibility of migrants arriving in Delaware unannounced.

“Our teams at Delaware Emergency Management Agency and Department of Health and Social Services are working with community organizations and other partners to make sure that migrants who arrive here have the support that they need,” said Emily David, the governor’s director of communications. “We are coordinating with federal officials and are prepared to welcome these families in an orderly manner as they pursue their asylum claims.”

In a statement Tuesday, White House Press Secretary Karine Jean-Pierre said, “We are coordinating closely with [Delaware] state officials and local service providers who are prepared to welcome these families in an orderly manner.”

The White House has not been in touch with Florida officials, she added.

“Our heads up did not come from Gov. DeSantis because his only goal, as he’s made it really quite clear, is to create chaos and using immigrants fleeing communism as political pawns,” Jean-Pierre said. “So it’s about creating political theater for him. It’s not about getting to a solution.”

Asked about the situation during a press briefing Tuesday, Biden said of DeSantis, “He should come visit. We have a beautiful shoreline.”

By noon Tuesday, multiple media organizations had gathered at the airport in Georgetown in anticipation of the plane’s arrival. 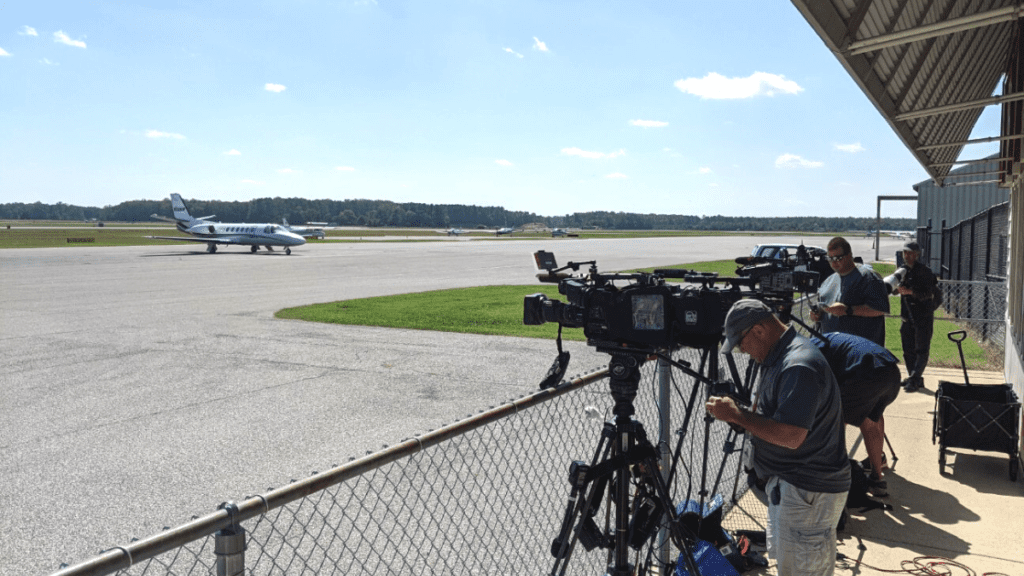 A number of news crews were grabbing lunch in Arena’s at the Airport. News crews had cameras set up pointing at the mostly empty runway, where a small plane — not the one in question — taxied through.

A waiter at Arena’s said it’s hard to say what business is usually like on a Tuesday, where airport traffic can fluctuate quite a bit.

An hour and a half before the plan was originally supposed to land, it was difficult to find a spot in the airport parking lot. The suddenly busy local airport is less than 20 minutes from Biden’s vacation home in Rehoboth Beach.

Tuesday afternoon, Jill Fredel, spokesperson for the Department of Health and Social Services, briefed reporters at the airport on the state’s response. She stressed that as of around 2:30 p.m., nobody had yet arrived, and so she declined to give details about where they might be given shelter.

“We are ready to go and prepared,” she said, “and the state is here to offer support to those who need it.”

The state is working with a number of community partners who have stepped forward, Fredel added, and plans to add a page to its website for those who want to support the migrants financially, although the webpage is not yet live.

Fredel said Carney was not given a heads up ahead of time by the governors of the states sending the migrants.

She said the state’s primary goal is to meet the immediate needs of those who arrive, including shelter, food and medical care, and “we will do that as long as it takes.”

“The people of Delaware welcome visitors. We are a welcoming community and there is already an immigrant presence,” said Diane Batchik, a board member for the Lutheran Immigration and Refugee Service, which helps resettle refugees.

Her message to the politicians sending migrants by plane was blunt: “Stop now … we all came from somewhere. So just stop.”

“It’s tragic that they are using human lives to make a point,” Rossana Arteaga-Lopenza, a volunteer with Casa de Venezuela, a network of nonprofits that offers support to Venezuelan immigrants, said of politicians.

Some of the migrants flown to Martha’s Vineyard recently were Venezuelans, and Arteaga-Lopenza said they are fleeing from the narco regime of Nicolas Maduro. “What happens in Venezuela, it’s extremely dangerous, not just for United States security, but around the world,” she said, adding that the Venezuelan community is suffering.

Batchik mentioned the thriving Hispanic community in Georgetown, not far from the airport, with its restaurants and barbershops lining the streets.

Neither advocate was able to speak to the plan yet for how to work with the immigrants if they do arrive.

“This is a situation where it’s a community effort and everyone is quickly doing a lot of coordination,” Batchik said. “… Everyone’s sending out email messages and using every means possible and just starting to coordinate.”

Delaware is a very welcoming place,” she said. “… and also, this area already has an awful lot of immigrant infrastructure in place. They’re part and parcel of the community.”

If the plane does come, she said, there are many professionals involved in the response. “They’ve been doing this for years. The flights are new, but the response is not.”

Arteaga-Lopenza said her message for any arriving immigrants is, “Welcome to the state of Delaware. The first day we will make you feel welcome.” Immigrants have already done the hardest thing, she said, which is to make the decision to flee their country and come to the United States with their families.

A state volunteer group, RespondDE, sent out an urgent call for volunteers around 10 a.m. “due to a shelter opening in Sussex County.”

By 2 p.m., the group notified volunteers that it had canceled the opening and asked them to remain on standby.

Georgetown Councilwoman Christina Diaz-Malone said she understood there may be as many as 55 immigrants on the plane, a number that had risen from earlier reports. She said they would be given shelter at the Stockley Center in Georgetown, run by the Department of Health and Social Services.

She said Georgetown, while not large, has experience dealing with an influx of immigration from the arrival of poultry workers in the 1990s, and has resources like the First State Community Action Agency, which has the experience needed.

Diaz-Malone, who is Dominican herself and a naturalized citizen, urged the incoming immigrants to work hard and assimilate into the community. There are those in the community whose message may not be welcoming, she said, and the newcomers need to listen to that message as well and understand those people and what they have contributed.

“It’s a very welcoming town, but you have to assimilate,” she said.

Diaz -Malone said she has also heard from immigrants who are doing things legally and waiting for their turn to get documented. They’ve been under the radar, working hard and paying their dues, and while they aren’t resentful of the other immigrants, they would also like to be considered.

Once the new immigrants get here, she said, “we’re prepared to welcome them.”

Since April 2022, Texas Gov. Greg Abbott, a Republican, has bused hundred of undocumented immigrants to large, Democrat-controlled cities throughout the United States, with a specific focus on “sanctuary cities” and states.

Most recently, Abbott sent between 75 and 100 immigrants to the Naval Observatory in Washington, D.C., where Vice President Kamala Harris resides.

The stunt is likely designed to compel Democrats with “open-border policies” to put their money where their mouth is, so to speak.

On Friday, U.S. Sen. Ted Cruz, R-Texas, tweeted that Rehoboth Beach could be “next,” in large part due to its proximity to Biden’s vacation home in North Shores.

Andrew Sharp and Betsy Price contributed to this report.

Charlie Megginson covers government and politics for Delaware LIVE News. Reach him at (302) 344-8293 or [email protected] Follow him on Twitter @cmegginson4.

Andrew Sharp is a freelance writer who has worked in journalism for almost a decade around the Delmarva Peninsula.