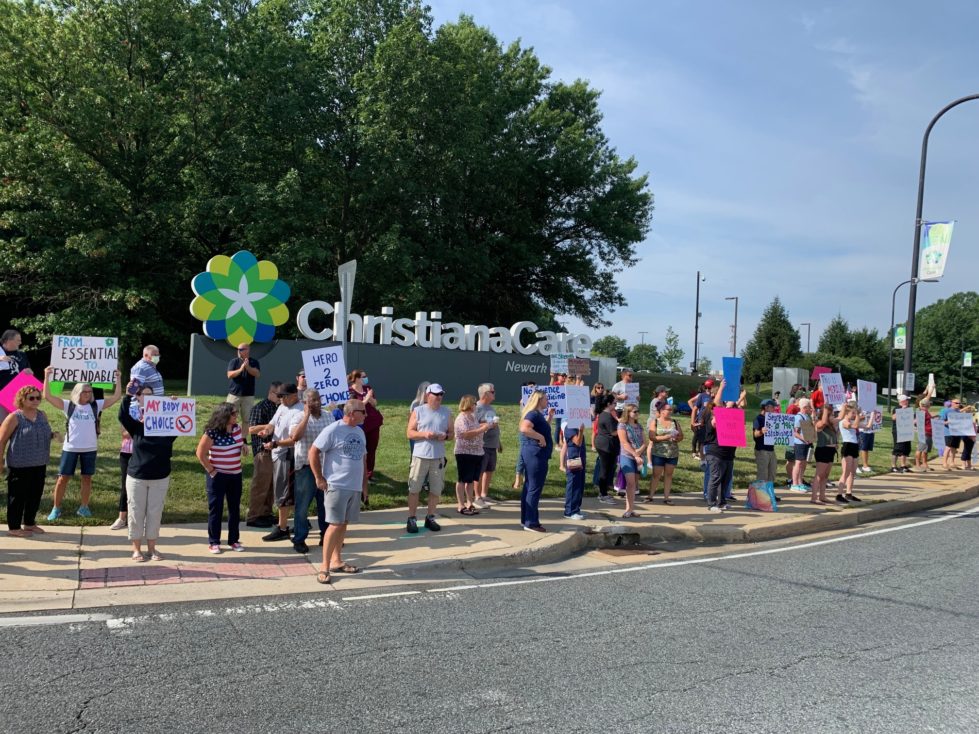 More than 350 people gathered on Churchman’s Road Saturday in front of ChristianaCare’s sign, and more were arriving by the minute.

More than 350 people gathered at the Churchman’s Road entrance to ChristianaCare’s campus Saturday morning to protest the health system’s requirement that all employees must be vaccinated.

Members of the crowd stretched down the road on both sides of the entrance and stood in the median.

Many carried anti-vax signs such as “My body my choice,” “I am informed. I do not consent” and “Say no to vaccine mandates.” Dozens wore  T-shirts that said “Essential to Expendable.”

Some of those shirts were in support of Tori Malin, a ChristianaCare patient tech who told reporters she was fired Friday after word spread that she was organizing a protest rally about the vaccinations. She had already put in a two-week notice, she said.

“That way, I kind of would have the power to take power back from Christiana and leave on my own terms instead of being terminated,” she said. “For me this was the hill I was prepared to die on. I knew that this rally could cost me my job.”

She said she was sent home Friday and told she would spend the rest of her two-week notice at home on paid time off. She said when she asked why, a manager told her they didn’t know.

Malin does not believe an employer has the right to demand workers be vaccinated.

“It’s not approved by the FDA, there’s not enough clinical trials or testing data on the side effects and the risks and adverse reactions,” she said. “I made a choice for myself and for my family not to be.”

She declined to say which patient unit she worked in.

Organizer Tori Malin, who said she was fired from ChristianaCare Friday for protesting the vaccine mandate, talks to reporters.

A lone state trooper car parked a block away before the rally. As marchers moved into place shortly after 9 a.m. behind a man carrying an American flag, another trooper car joined it. On the campus, one ChristianaCare security car with lights flashing was parked in the median, with another nearby in an employee parking lot.

On the far end of campus, at the entrance near Chik-fil-A, the intersection was silent and largely deserted, except for two private security cars with lights flashing.

On Churchman’s Road, the crowd was noisy, but well-behaved with members generally ebullient to be there and pleased with their co-protestors. Many seemed to know each other, and more than a few wore hospital scrubs.

The group occasionally broke into chants such as “no manDATES, no manDATES” and enthusiastically cheered and waved their signs when passing traffic beeped, which the crowd interpreted as support.

Those cars included a red ambulance driving out of ChristianaCare’s campus.

The crowd parked at the shopping center across from Christiana Care and marched to the health system campus.

The group would stay until noon, Malin said.

The protest was well publicized by conservative groups, including Patriots for Delaware.

ChristianaCare is one of three Delaware health care systems that have announced all their employees, whether they work with patients or on campus, must be vaccinated. The other two are St. Francis and Nemours Health System, which operates A.I. du Pont Hospital for Children.

Adriana Brown of Rising Sun, Maryland, said she was attending the rally because Union Hospital near her is run by ChristianaCare.

The vaccines are not real vaccines like a polio one, she told reporters. Those who take the polio vaccine never get polio, she point out.

The COVID-19 vaccines are just shots, like a flu shot, she said. You have to keep taking flu shots to avoid getting the flu, she said.

“This is not about me,” she said. “This is about everyone and our freedoms to choose what we want for our own lives.”

Many in crowd carried anti-vax signs or wore shirts that said “essential to expendable.”