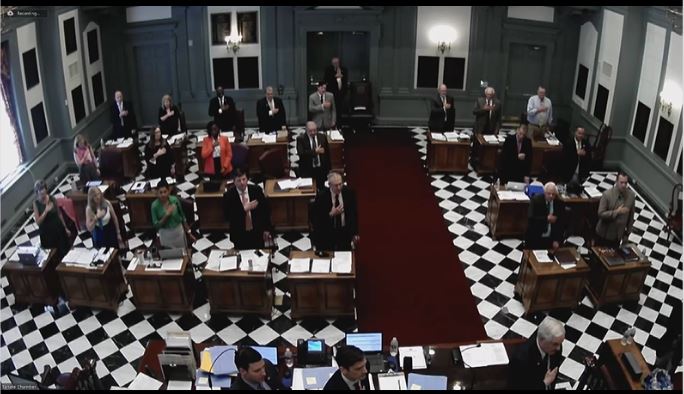 The Delaware Senate says the Pledge of Allegiance at the start of Tuesday’s session.

Delaware residents will soon see the effects of a $1.35 billion spending package was passed Tuesday by both houses of the General Assembly.

Gov. John Carney is expected to sign it and a $63 million Grants-in-Aid bill Wednesday at 1 p.m. in his office, after it dusted really well because the building has been closed for 15 months, joked Speaker of House Pete Schwartzkopf, D-Rehoboth Beach.

The bond bill, also known as Senate Bill 200, pays for road, school and courthouse construction and other one-time items such as library upgrades, college campus improvements, state park maintenance and clean water programs. It passed unanimously in the Senate and was close to that in the House.

The Grants-in-Aid bill, which provides funding for fire departments, veterans organizations, eldercare centers and other non-profits handling state programs, passed unanimously in the House. It had been expected to be about $55, but legislators used some of the windfall to push it further.

The huge budgets were made possible by an unexpectedly great flow of revenue in the last year, in the face of the financial turmoil cased by the COVID-19 pandemic. Finance officials said factors contributing to that included the huge federal COVID-19 payments, expanded unemployment payments, much larger than expected personal income tax payments, tax on large employee bonuses last year, record real estate transfer taxes and a rise in lottery and gambling income.

“Through this bill, we are making an unprecedented investment in Delaware’s future by funding dozens of infrastructure projects that will help support our state’s economy for generations to come,” Capital Improvement Committee Chairwoman Sen. Nicole Poore, D-New Castle, said in the Senate.

“With this legislation, we’re making bigger investments than ever before in Delaware’s transportation infrastructure, fulfilling promises to our school districts and institutions of higher learning, and supporting economic development and high-quality jobs across our state,” Heffernan said. “On top of that, this Bond Bill launches a transformative new clean water initiative that encompasses everything from drainage improvements to long-overdue dredging work in our inland bays.”

Sen. Dave Wilson, R-Ellendale, served on the Bond Committee and was pleased with the end-result.

“Delaware has a number of infrastructure needs and this bond bill more than addresses them, including the largest amount of funding toward dredging projects that I can recall” Wilson said.

Some Republicans expressed concern about the cost of the bill, up $400 million over last year’s.

Rep. Lyndon Yearick, R-Camden, said that in the midst of the pandemic, state money could better serve taxpayers in their pockets than in the form of such a large bond bill and that lawmakers should hesitate before patting themselves on the back.

“It’s kind of like deja vu. Twelve months ago we were at an all time high with capital bond bill spending. Well, we sure blew past that” said Yearick. “$400 million more than last year — there’s no doubt that everyone in this room is going to benefit from that, present company included.

“You can call me a hypocrite – you can call me whatever, but a $400 million increase, and we have given zero back to the taxpayers. I think it’s rather disingenuous, coming out of a pandemic with plenty of Delawareans still suffering, who have lost jobs, who have had their businesses shuttered, that we have added over $400 million into this.”

Schwartzkoff responded that the bond bill expenditures were, in fact, going back to the taxpayers, albeit in the form of infrastructure upgrades and other community projects.

Rep. Mike Ramone, R-Pike Creek, who serves on the Bond Committee, said that he would like to see a mechanism to return a certain amount of funds to the public if the state finds itself in a financially secure position.

“In my district, I don’t really have many areas where many of these benefits will be received,” he said. “But a senior getting $100 in a senior tax credit or someone just getting a portion of their personal income tax back, even if they got a refund, those kinds of things would have been nice.”

Ramone said that he would like to see “some kind of automatic consideration that has to go toward tax refunds to give people their money back in a situation like this.”

Rep. Jeff Spiegelman, R-Kenton, supported the bill but said that in future years he would like to see more transparency in the process, specifically with regard to the $70 million line item allocated to community redevelopment funds.

Community redevelopment funds are one-time allocations that legislators earmark for nonprofits, schools and community agencies in their districts.

“This year in particular, I’m sensing a bit of a structural issue with the structure of the bond bill itself, with the community redevelopment funds and this idea of being flush with cash, where we have a bunch of cash and so it becomes just a big game of ‘come and grab it’ for us 62 legislators for the projects that we care about in and around our districts, but I’m not sure that’s necessarily the healthiest way of doing this” said Spiegelman.

He said he’d like to see legislation that set a cap on how much one-time cash can go into a bond bill “in order to limit this idea of having what’s commonly referred to as ‘pork spending’ …  so if we’re flush with cash again, some of it will in some way perhaps be returned to the people of Delaware.”

Heffernan said the list of community redevelopment projects would be published as soon as they were combined into one list. Some of the legislator’s requests had not yet been sent in, Schwartzkopf said.

Of the $70 million in community redevelopment funds, $42 million is to be allocated toward projects requested by Democrat legislators and the remaining $28 million going to Republicans’ requests.

Funds from the financial windfall also will go into a budget-smoothing fund, which legislators and state officials credit with helping Delaware avoid huge budget cuts last year during the pandemic.

The state pulled $60-plus million from the fund, first proposed by former State Treasurer Ken Simpler, a Republican, and then implemented by executive order from Gov. John Carney.

House members on Tuesday credited budget smoothing as a major factor that has allowed Delaware to rebound from the pandemic faster than other states.

Schwartzkopf told the House Tuesday that leadeship had hoped to wrap things up, but there would be a short agenda to deal with at 2 p.m. Wednesday.

Legislators then are free to return home, but must be back on a Zoom session at 11:15 p.m., so the House can be sure it has enough members to convene, in order to officially suspend the session until they are called back in the fall to deal with redistricting.

It has to be done at midnight, Schwartzkopf said.