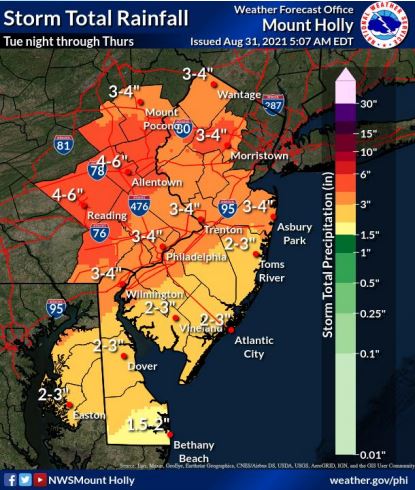 Tropical Depression Ida is expected to bring heavy rain and the potential for flash flooding to Delaware throughout Wednesday and Thursday.

The National Weather Service is forecasting 3-4 inches of rain in northern Delaware, 2-3 inches in southern New Castle County, Kent County and parts of Sussex County, and 1.5-2 inches at the beaches and southern Sussex County.

As remnants of Hurricane Ida make their way toward the first state, the Delaware Emergency Management Agency has announced a flash flood watch will be in effect for all of Delaware from Wednesday morning to Thursday afternoon.

According to the agency, flooding is expected in creeks, streams, urban areas and poor drainage areas.

There is an increased risk of severe weather between Wednesday and Thursday including strong to severe thunderstorms capable of causing downed trees and power lines as well as the potential for isolated tornadoes.

In preparation for the storm, DEMA recommends residents clear drains and gutters and ensure their sump pumps are operational. Motorists are advised to never drive through standing flood water.

Storm and emergency updates will be provided throughout the duration of the storm by the US National Weather Service Philadelphia/Mount Holly.

The storm, which struck Louisiana on the 16th anniversary of Hurricane Katrina, was one of the state’s most intense hurricanes. Four deaths have been confirmed as a result of the hurricane, and millions remain without power as the state enters a heat wave with temperatures reaching as high as 105° F in some areas.

The hurricane lost steam as it made its way inland, and was reclassified by the National Oceanic and Atmospheric Administration as a tropical depression by Monday evening.

On Saturday, 110 animals were airlifted out of Louisiana by the Brandywine SPCA. They were sent to the organization’s adoption centers where adoption fees have been waived. Moving the animals out of Louisiana both saves their lives, and makes rooms for other animals sure to come after the storm.

Delmarva Power sent over 100 workers and contractors to Louisiana on Monday to assist with recovery efforts and restore power in the region. The crews are expected to arrive in the storm-battered state Wednesday.