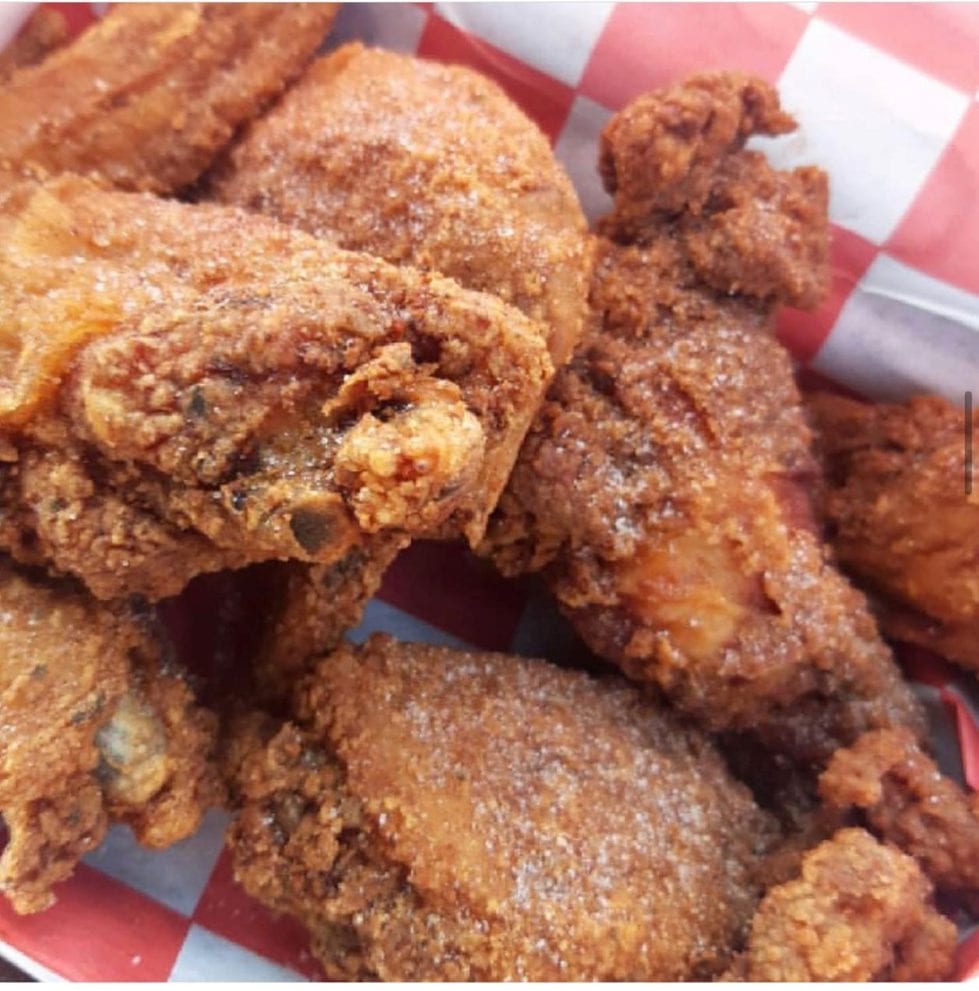 There is one refreshing thing that Crystal Ashby and her food have in common—there ain’t nothing subtle about either one.

Crystal—or “Chef Cryss” to her fans—is the 34-year-old celebrity chef at the heart of Middletown’s Crystal’s Comfort Food.

She greets me in a “Racist People Suck” T-shirt and giant wooden earrings that pay homage to Africa; the T-shirt is a statement in response to the anti-Black business commentary that exploded online after she and husband and co-owner, Steven Ashby, 38, made it clear they were keeping their mask mandate despite the governor’s lifting of the restriction.

“I’m happy to say 99 percent of our reception here in Middletown has been fantastic and crazy supportive, particularly with the other businesses closest to us,” says Crystal, who opened the doors of her soul food spot in late April to sell-out crowds. “But that other 1 percent? I just gotta light my sage, go outside and breathe.”

And then there is the food.

Take, for example, the champagne parmesan wings, which will have you questioning why every bottle of Moët Imperial doesn’t come standard with a side of chicken and cheese. Savory, sweet, surprising and exploding with effervescent warmth, they taste like nothing you’ve had before. The ring of molten golden elixir that remains at the bottom of the basket after the last bite might actually be a portal to another galaxy.

Add in her staples like award-winning sweet potato wings, risky payoffs like red velvet wings and culinary mashups like cheesesteak wings and taco wings, and it’s no surprise that Ashby is the East Coast’s reigning wing and sauce queen.

“The craziest thing is it’s all self-taught,” she says. “I’m not trained. I just grew up watching my grandmother and my aunts cooking for holidays or other events. Cooking was just something that I really enjoyed. I would always wonder, ‘Ok. What can I do with this?’

That’s how she came up with her sweet potato wings.

“I had never heard of this before my wife started working on it,” says Steven. “She was just like, ‘What about sweet potato wings?’ and went straight into the kitchen and started playing. First she tried a few different batters, and we were like, ‘Nah. That’s not it.’ Finally she landed on a dry rub and we’re like, that’s the one.”

That wing crushed the competition at WingFest in Philadelphia.

After word got out in their Lansdowne, Pennsylvania, hometown that Crystal’s cooking was not to be missed, the couple started hosting platter pop-ups and offered catering services.

But the demand made it clear—they needed a brick and mortar.

Crystal’s Soul Food’s landmark location, in Landsdowne, opened in 2017. Two years later, the Food Network came calling to invite the duo to fly out to California to compete in Season 12 of “The Great Food Truck Race.”

“I can honestly say I applied 50 times or more for the show, and this was before we were officially in business, when cooking was still just a hobby I loved,” Crystal says. “I said, ‘I could do that.’ I just had to be on it. Then we were out shopping one day and I got a notification that [Food Network’s] Tyler Florence started following me. Then I got the phone call.”

Fans of the champagne parmesan wings can thank the show for that culinary creation.

“We had to come up with that recipe in about 15 minutes on the truck in one of the first episodes,” Steve says.

Although they didn’t win the $50,000 grand prize, they won some big fans. Like Yvonne Orji, star of HBO’s “Insecure,” who asked the couple to cook for her while she was on location filming for her Netflix stand up special.

They were also approached to franchise the business.

“I just can’t do that,” Crystal says. “It’s my baby.” (They do dream of seeing their sauces and specialty butters in supermarkets across the nation one day, but the cooking? That’s all Crystal.)

The Middletown couple participated in “The Great Food Truck Race.”

Season 12 of the show aired in 2020. The Ashbys are anything but lazy when it comes to branding, promotion and their social media presence (check out their movie-esque clips that feature their four sons, made with an assist from Crystal’s cousin, Philly rapper Freeway), so the couple was primed to capitalize on the season premiere.

“The episodes started airing March 15, 2020,” Steven says, shaking his head. The Ashbys had closed their store down three days prior due the pandemic.

“The writing was on the wall, man. We had to limit who could come in, then people just stopped coming in … at that point we pulled our kids out of school and looked at each other like, ‘What are we going to do?’

So Crystal approached the pandemic like she did ingredients in the kitchen: “Ok. What can I do with this?”

“We never stopped working during the pandemic. We’re the kind of people that take lemons and made lemonade,” Crystal says. Their lemonade was FroCo, frozen offerings of Crystal’s Comfort Food.

“We would go down to the old location because we still had it even though it was closed, fry up the chicken, then vacuum-seal and ship it everywhere: North Carolina, California, New York, Alaska. Every penny we made was for one purpose—to reopen.”

Yvonne Orji, star of HBO’s ‘Insecure,’ asked the Ashbys to cook for her.

Having been living in the MOT area for a few years, the commute back and forth to Landsdowne started to take a toll. So when they were finally in a position to reopen, they chose Middletown.

“We had so many tickets, so many orders those first few days, and some upset people,” Steven says, laughing. “I think part of the problem is these folks thought we were new to this, like we hadn’t been doing this for years.

“But they have to understand: My wife is a celebrity chef. She takes time. She cooks to order. If you can’t wait, we understand, but there is a difference between what we do and fast food.”

But it’s about so much more than food.

“We’re big on the vibe,” Steven says. “If the vibe isn’t there … I always compare our place to that family barber shop, when everyone is laughing, joking, talking—that’s what Crystal’s is.

“We’re not just restaurant owners. We want to be mentors, too. If I have someone stop in here and say, ‘I want to know what you know,’ then we want to be there for them. A lot of Black-owned businesses don’t open simply out of fear. We want to close that gap.”

If Crystal’s not brainstorming innovative new twists on soul food at home, you’ll find jer doing the cooking at the store to the sounds of jazz, neo soul, pop, rock.

“We don’t hum here, we sing, and it’s cranked up,” she says. “I cook here like I do at home. Because at the end of the day, that’s what I’m doing—welcoming you into my home, with my food. I don’t know any other way to do it.”