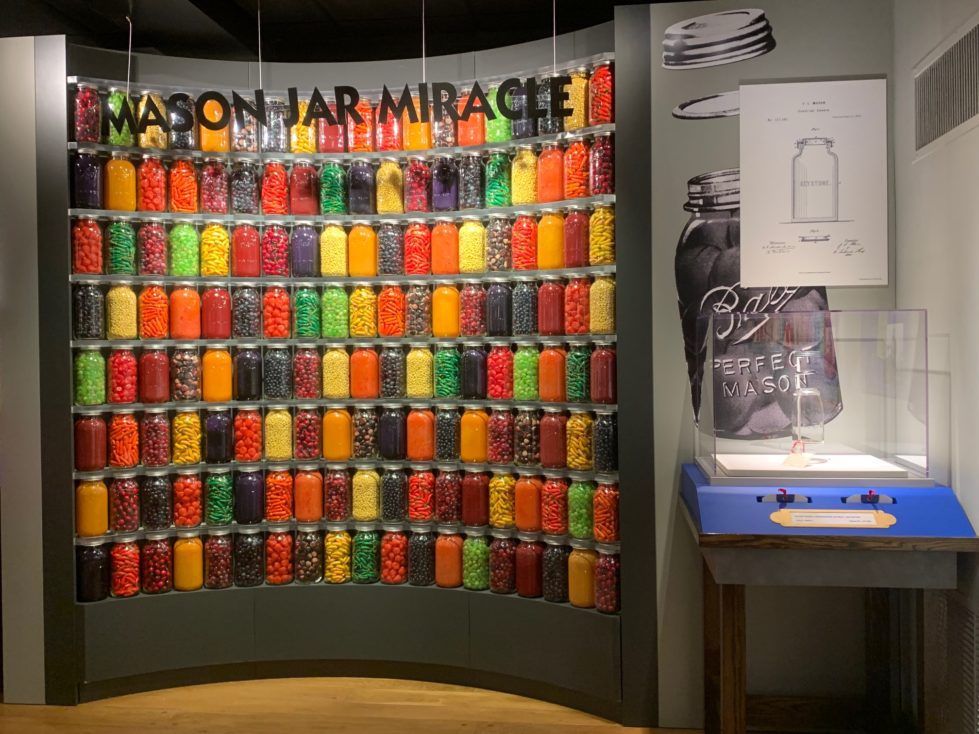 Hagley Museum and Library’s new permanent “Nation of Inventors” exhibit reflects the former du Pont estate’s revised mission to use its history and assets to encourage creativity in everybody who visits.

“Our new mission is that we seek to inspire people to be innovative in their own lives through investigation and exploration of our historic collections, the original powder yards and our online resources,” said Jill MacKenzie, executive director. “We think that one of the best ways to do that is for them to understand that this is not something that’s new. People have been inspired to invent for hundreds of years and so coming here and teasing out the stories of the inventors I know is going to inspire them because it certainly inspired me.”

Hagley was the home of the DuPont’s first gunpowder mills and the family home of E.I. du Pont, who founded them on the side of the Brandywine River.

The $2 million exhibit, which opens Sept. 13, replaces one about the history of the DuPont Corp. that was installed in 1957 in the visitors center and taken down to make way for this one. Hagley showed it off to the press and travel industry leaders Monday.

The two-floor display starts with a glass case filled with 60 patent models, culled from the 5,000 that are in Hagley’s collection. It’s about half of what’s on display through the exhibit, said Christopher Cascio, assistant curator.

The display case is a nod to the way that people would have seen the models in Washington, D.C., in the 19th century.

They were a big tourist draw, Cascio said. Not only were people interested in invention as a measure of progress, but many inventers wanted to see what each other were doing.

“America was the only country to require models to be submitted with a patent application,” Cascio said. “Part of the reason why was to to be able to show why it’s new and unique and why it was worthy of a patent. Also, it would be a key witness in a trial if somebody tried to sue you, or somebody tried to steal your idea.”

The models will be rotated with new ones from the collection.

“That’s one of the beauties of this,” Cascio said. “It doesn’t have to stay the way it is.”

The staff tried to choose models that looked cool, were fascinating or had a great story. Hence, a metal casket, a fancy door lock with bright brass knob, even something from Jim Beam Bourbon are across from the front door.

DuPont makes an appearance in the show, at the back of the first floor, near a case devoted to Delaware inventors.

DuPont was innovating and inventing from the beginning, including a 1804 graining machine and process, which allowed the gunpower company to separate the size of its gunpowder pieces for different purposes.

MacKenzie points out that that patent system was both colorblind and genderblind.

“On the second floor, we tease out the stories of people of color, or women, and show just how important they were to the history of this country, and to the history of invention,” she said. “We’ve got some great stories, and also Delaware inventors, so in many ways it’s a local story but also a national story.”

The seeds for the transformation of DuPont from a gunpowder factory to a chemical powerhouse sprouted in the 1840s when the company worked on smokeless gunpowder, but didn’t have the knowledge or technology to do that right, said Lucas Clawson, Hagley’s historian.

“It took a little later in the century to figure out how to better control that process,” he said. The initial changes started in the 1890s and the company’s big transition to a chemical powerhouse took place as World War I was gearing up and going on.

A byproduct of the different kind of explosives they were creating was was nitrocellulose and cellulose chemistry, from the company’s work with cotton. Some of that work became the basis for synthetic fabrics and plastics and some of the processes led to paints and varnishes and paints. It also led to the creation of chemicals, processes and products that became household names, such as Teflon, Tyvek, Mylar, Dacron, Lycra and Orlon.

Clawson’s favorite patent model is a press squeezing gunpowder into different shapes for different uses. It was created by Lammot du Pont and patented in 1865. One reason: Cannons needed a certain shape to propel the ball the most accurately.

“Part of the innovation that you see out on the DuPont property has been figuring out how to make explosives safe,” Clawson said. “Making black powder is way safer than you would think it would be if you follow all the steps.”

Clawson said one of the points of “Nation of Inventors” is to help people who are visiting Hagley put into perspective what they’re seeing in the powder mills on the property.

“This is not a monolithic product,” he said “The black powder kind of breaks down into several grades. You’ve got one that’s used specifically in firearms, another one for blowing up rocks and another one for use in fuses,” he said. “That’s kind of the bigger picture of this and part of why innovation is such a big deal, and why this machine is such a big deal. It’s figuring out how to take the same three ingredients and essentially the same process but  make a different product out of it.”

Choosing from 5,000 patent models was hard, but this metal casket made the cut.

Hagley’s exhibit talks about why people would want to patent ideas and how popular the models were.

Hagley’s exhibit tries to put faces on the process of invention and patenting.

Hagley’s exhibit on inventors connects the spread of information to world’s fairs, which exhibit new products and inventions.

A favorite patent model is this duck blind, in which the hunger crouched in a boat festooned with fake swans.

A section at the back of the first floor of Hagley’s exhibit focuses on DuPont.

One section of the exhibit deals with the DuPont company’s start and inventions.

The role of invention in food preservation is colorfully summed up in a display of Mason jars.

A second-floor exhibit shows how artificial limbs were beginning to be more useful after the Civil War.

Sewing and the interlocked machine stitch gets its due in Hagley’s exhibit.

Many of women’s early inventions hailed from the arena of housekeeping, but not all.

One woman tied the right of women to vote to the power of invention.

Inventions can come from anyone, the new Hagley exhibit takes pains to point out.