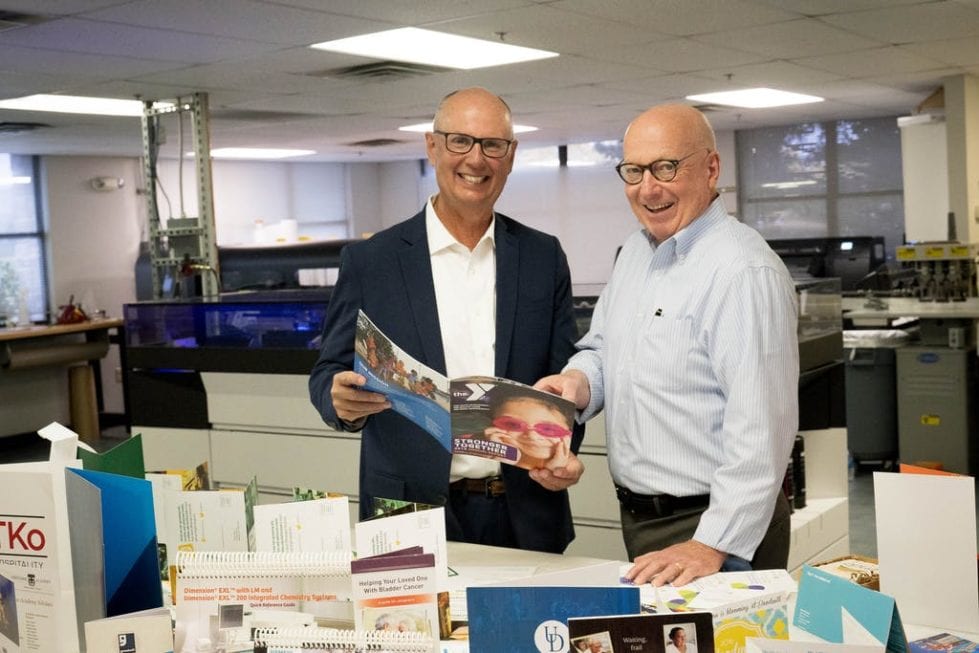 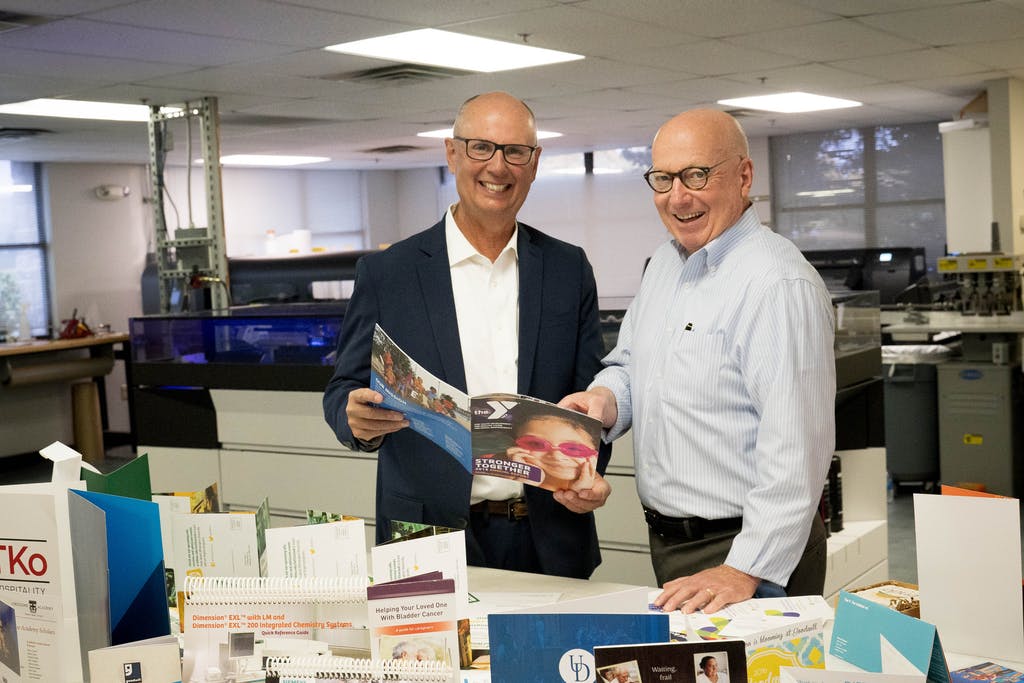 Alan Gardner, left, and John Riley left DuPont’s printing operation in 1995 to form their own company.

In the 25 years that John Riley and Alan Gardner have operated Growth Inc., they haven’t once had a fight.

What they do have is a client base that they would go almost any lengths to please.

“We had a client who was … cantankerous I guess is a good way to describe her,” said Gardner, who commutes to the Newark office from his home in Rehoboth. “She didn’t tolerate any mistakes or lateness or any issues with the work she had us doing, but she had a tremendous amount of work. We wanted to get in and do work for her.”

She initially was suspicious of Gardner and Growth Inc., but as they did more work for her, she came to trust them.

“It got to the point where she was calling me to do everything,” Gardner said. “She would call for me personally. She didn’t want to talk to anyone else at the time. She would call me when her printer ran out of ink, for example.

“One day she called me in a panic, and she said, ‘I need you to get down here right now.’ She would expect me to drop everything the minute she called. Then she said, ‘Stop on your way and get mouse traps. I have the cheese.”

She had a mouse trap in her facility, but would not call her in-house maintenance crew.

“She wanted me to come down there and take care of it, and I did,” he said.

For a few weeks Gardner stopped at her business once a day to clean and reset mouse traps there.

It’s just another way that Growth Inc.’s “corporate yes culture,”  instituted in the founders early days, still shows up in the work they do. 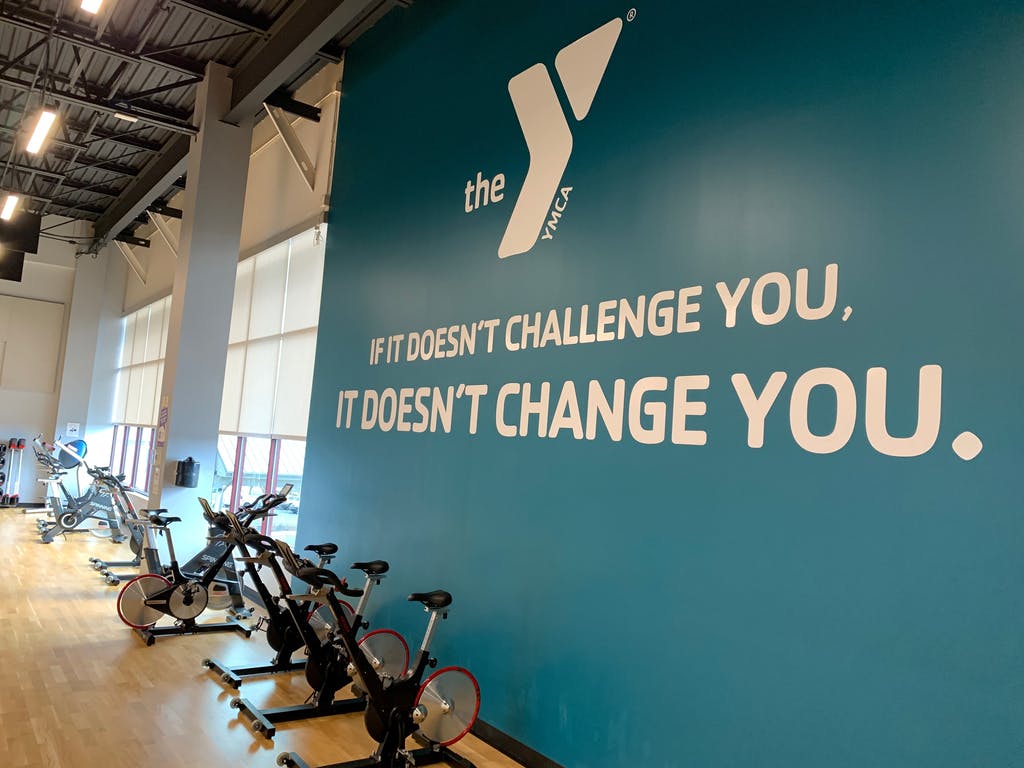 Growth Inc. created this wall sign for the YMCA.

“When you’re out there on your own and it’s your business, it’s tough to say no to somebody,” Gardner said. “We kind of developed this yes approach to everything. We would find a way to get done what they needed to get done.”

Growth Inc. started in March of 1995 when the two former coworkers left the Boothwyn, Pennsylvania, DuPont Corp. printing plant.  One reason they let was because of rumors that the plant would shut down soon.

Riley, who now lives in Hockessin, wanted to open a business long before he left DuPont.

“Alan came and said, ‘Hey, you oughta do it because it’s really something you’re passionate about,’” Riley said. “And I said, ‘Well, you know if you think it’s so great, then why don’t you come with me?’ And  that was the start of the partnership.”

As it turned out, one of largest clients Growth Inc. reeled in during its early years was DuPont Pharmaceuticals. The first job required thousands of copies to be printed and collated into stapled packets.

“Some would say a job too momentous for just two people,” Ridley said. “This was manual copies, on a tight schedule, with one machine. I think it tested our relationship, Alan and I.”

“Twenty-five years ago, it wasn’t as easy or predictable to do something like that,” Gardner said. “Today it’s mostly electronic.”

“It was a lot of stress,” Riley recalled. “The machines would break, and we would have to improvise and try and figure out how to get these things done.

“We did it and we didn’t kill each other in the process. It was very a telling project for things to come.” 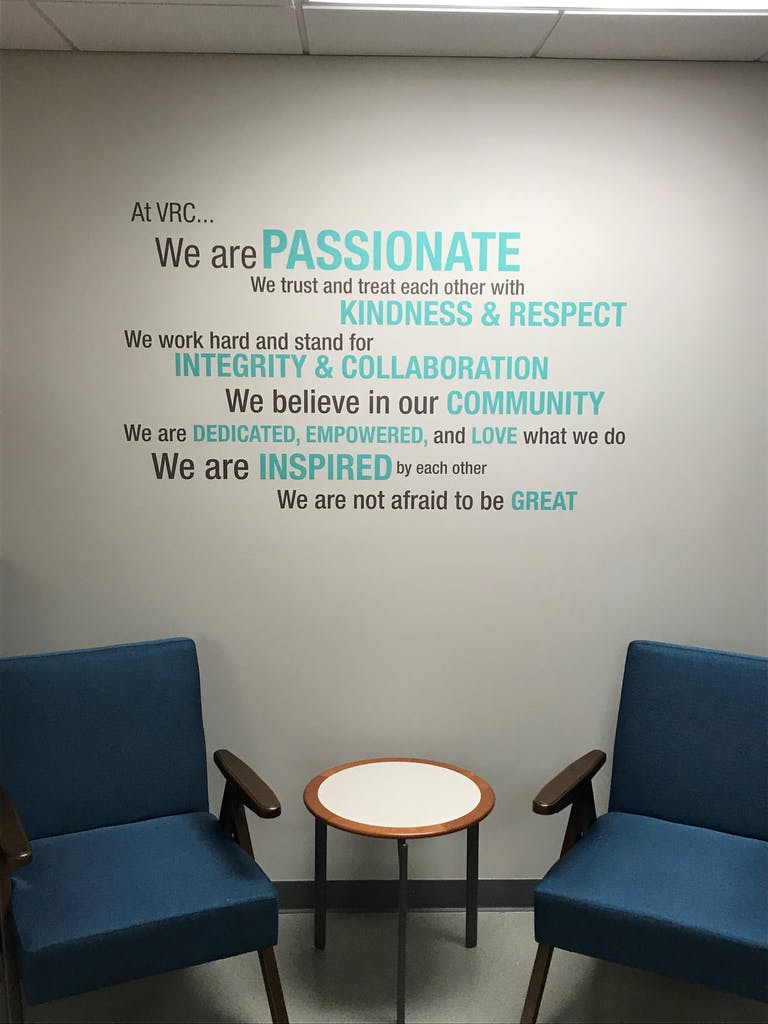 Growth Inc. provided this wall sign for a veterinary hospital.

Riley, who oversaw the DuPont plant when they were there, handles Growth Inc.’s facility, equipment and financials. Gardner, who supervised Dupont’s fulfillment center, now handles the client and customer service operations of Growth Inc.

“We like to say that Alan brings the work in and I get the work done,” Riley said.

The company today has 14 employees and serves nearly 100 businesses on a regular basis and 50 on a less frequent basis. Its annual revenues are about $3 million.

Located at 311 Ruthar Drive in Newark, Growth Inc. has worked with its neighbors at the YMCA, University of Delaware and ChristianaCare to create wall graphics and more for them.

They will refuse a job only when they absolutely don’t have the means to do it. It often comes down to not owning the correct machinery for a job, but when that happens, they try to help the client find someone who does.

Even so, not having the means to do something hasn’t always stopped Growth Inc. from saying yes.

“I was out on a sales call, and the woman said she was would be right back,” Gardner said. “I looked to the corner of her office and she had these huge rolls of construction blueprints. When she came back, I asked her if she ever needed blueprints made.”

She said yes, and that she needed them now.

“And I said yes,” Gardner said, knowing full well “we had no way to do it.”

Even without the proper printer, or a van to deliver such a huge quantity, they figured it out. Two days later, with their spanking new van, they delivered the blueprints.

They’ve even found a way to thrive while many people worked from home during the pandemic, and companies didn’t have the same need for copy or printing work.

COVID-19, however, generated a lot of information that needed to be passed to the public.

Growth Inc. was there to provide floor and window graphics that did that.