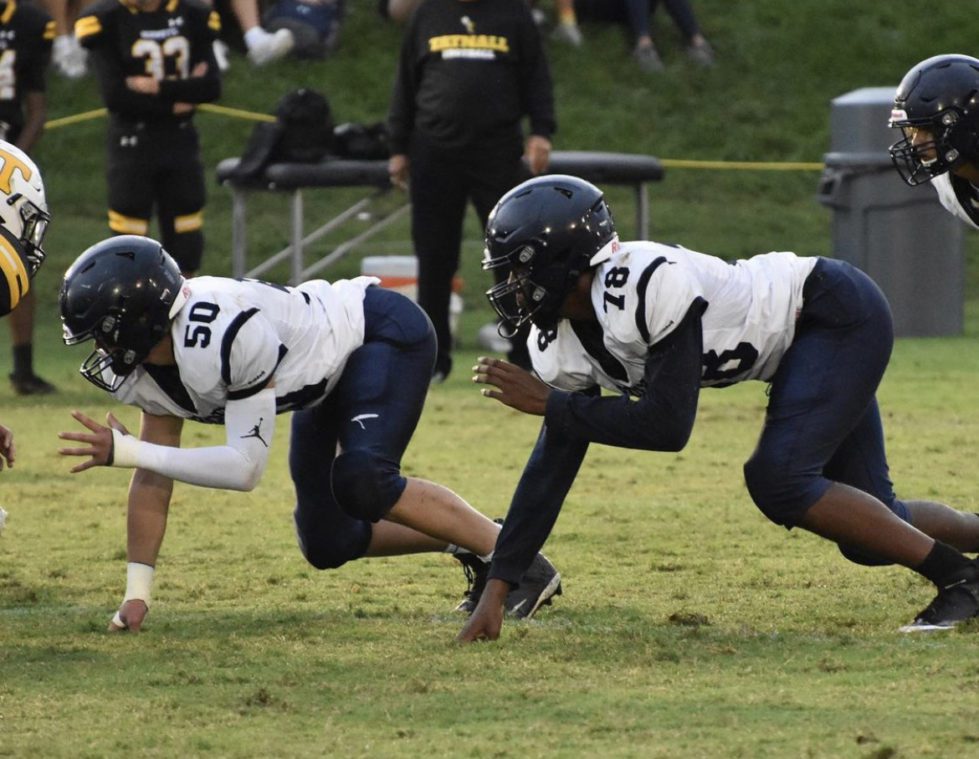 Wilmington Friends traveled to Tatnall and kept Tatnall scoreless under the Friday night lights. Tatnall football normally plays on Saturdays but for one night a season they rent some lights & have a Friday night game under the lights. On our show Coach Avery McMullin during our interview told us that the whole school gets into the Friday night game not just the players. We were told on the show that they asked all the fans to come wearing black to create a blackout for the game.

Friends however was not intimated. They played spoiler Friday night as their defense kept Tatnall off the scoreboard shutting out Tatnall 35-0. For the second week in a row the Quakers defense has kept their opponents out of the endzone. Last week friends defeated Delmar 40-0. The offense also continued putting up points while the defense kept their opponents scoreless.

Friends scored on their first drive when Rob Tattersall hit Jaden Willie in the flat for a 10 yard touchdown pass. Tatnall’s defense was able to keep Friends off the scoreboard the rest of the quarter, but late in the second quarter Friends would strike again.

Friends would drive the ball 67 yards then cap it off with a 5 yard run by Osinachi “Osi” Chukwuocha midway through the quarter. Then with just .04 seconds left in the half Tatersall would punch it in from 5 yards out giving the Quakers a 21-0 lead at half.

Both teams’ defenses held strong in the third quarter as both teams were held scoreless. Then Early in the fourth quarter Tatersall on defense this time busts through the line on a 4th down getting a hand on the punt to block it, then had the presence to pick up the loose ball and return it for a touchdown 28-0 Friends. Then late in the 4th Chukwuocha would find pay dirt from 2 yards out scoring his second touchdown of the game.

Osi led Friends on the ground gaining 246 yards in the game while scoring 2 touchdowns. Tatersall would account for 3 touchdowns on the day passing one, running one, & blocking a punt on the defensive side of the ball for another one.

The Quakers improved their record to 2-0 on the season with the 35-0 victory. They will host Tower Hill next Saturday at 2:30pm.

Tatnall drops to 0-2 on the season with the loss. They will host St Elizabeths’ next Saturday at 2pm.