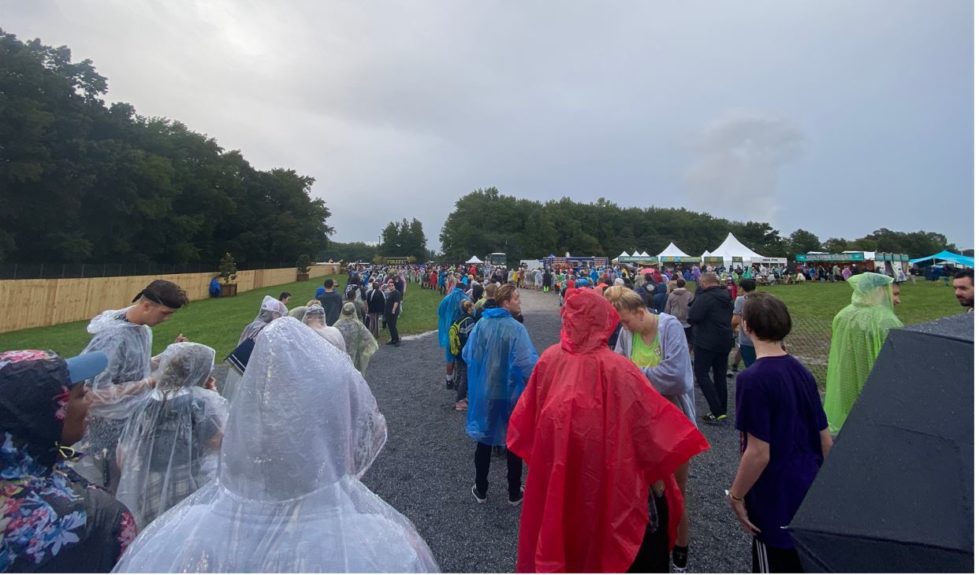 Thousands of fans were waiting anxiously to admission into the Firefly Music Festival late Thursday.

Thousands of wet and tired concertgoers began flowing through the entry gates to the Firefly Music Festival in Dover about 7:30 p.m., seven hours after admissions were expected to begin.
Early in the day it was clear the event’s start would be marred with weather complications.
As thunderstorms rolled through Dover, festival organizers made the decision to stop admitting guests, forcing thousands of fans to wait in hours-long lines for buses to more lines.
The scheduled start time was noon, and then tentatively set for 3 p.m. That came and went as lightning in the area pushed the start time back even further as some guests started to wonder if they’d get in at all on Thursday.
In a radio transmission made to Firefly staff, organizers said they did plan to open the event at some point, but weren’t sure when.
Then came the much anticipated Tweet.
“Thanks for staying positive!” the message from Firefly said. “The serious weather has passed and gates will be opening at 7:30 p.m.”
The response was mixed.
Some complained that the Firefly website said the event would be held rain-or-shine.
Staff members said the delays were caused by lightning in the area. Every time lightening struck in the festival’s proximity, organizers were required to wait another 45 minutes.
Some speculated that organizers wanted to delay the festival’s start in the event an evacuation became necessary. That would be easier if folks hadn’t entered yet, they thought.
Despite the frustration, some said organizers were doing the best they could, given the circumstances.
Tyler Frey of Allentown, Pennsylvania, said he arrived at the festival grounds around 3 p.m.
Frey wasn’t in a big rush — he said he wanted to make sure he gave himself enough time to see electronic dance music duo Hippie Sabotage perform at 6:15.
That performance has been rescheduled for 8 p.m.
Now, Frey’s just hoping he’ll be able to catch Thursday’s headline act: Billie Eilish.
He’ll have to wait a while — her set had been rescheduled for 11:15 p.m.
“There’s not a whole lot you can do about the weather,” Frey said. “I’m gonna be bummed out if the times are shorter for certain artists today, but the weather looks great for the rest of the three days, so I’m excited about that.”
Frey isn’t wrong. Forecasts are calling for a three day high of 75 degrees with clear and sunny skies.
Friday’s headline act is The Killers.
Delaware LIVE is on site covering the event. Stay tuned for updates.