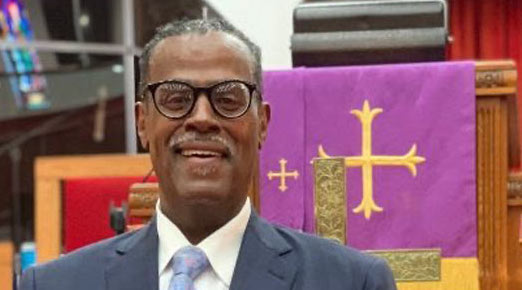 Bishop Silvester Scott Beaman, the Delaware pastor who delivered the inauguration benediction for President Joe Biden, is presiding over his last service in Delaware on Sunday.

That’s because he was in July elected and consecrated as the 139th bishop in the African Methodist Episcopal Church. He has been assigned to serve the 15th Episcopal District of South Africa.

Sunday’s service starts at 9 a.m. at Bethel AME Church, 604 N. Walnut St., Wilmington, with a farewell celebration at 10. The service will also be live-streamed.

Because seating is limited by social distancing, a drive-by parade of well-wishers (they’re urged to gather at Christiana School District parking lot, 600 N. Lombard St.) is at noon.

The church’s announcement calls Beaman one of few members of the clergy in the nation to offer prayer in both the US Senate and House of Representatives. So it’s no surprise that the farewell is expected to include remarks by U.S. Rep. Lisa Blunt Rochester, U.S. Sen. Chris Coons, Wilmington Mayor Mike Purzycki and New Castle County Executive Matt Meyer.

Since coming to Bethel in 1993, Beaman has grown his congregation by more than 2,700 members, eliminated the church’s debt, and oversaw more than $500,000 in renovations.

The church also credited him for:

• Expanding more than 50 ministries, including an AIDS task force.

• Serving as past president of the Interdenominational Ministerial Action Council of Wilmington.

• Being induced into the Martin Luther King Jr. Board of Preachers at Morehouse College.

Beaman is married to his childhood sweetheart, Renee Palmore Beaman, a registered nurse who is the governor-appointed director of the Delaware Division of State Service Centers.