The Delaware Department of Natural Resources and Environmental Contol on Monday began restoring beaches after a powerful nor’easter caused widespread erosion and damage.

“Our shoreline team will be hard at [work] for the foreseeable future on beach restoration priorities that this storm handed us,” said DNREC Secretary Shawn Garvin.

Garvin said he doesn’t expect recovery to be either instant or east, but he is confident that his department will overcome the challenge in time for the summer beach season.

U.S. Senator Tom Carper, D-Delaware, said the damage done to Delaware’s beaches during the nor’easter make it clear that robust federal, state and local partnerships are needed now more than ever.

Carper is the chairman of the Senate Environment and Public Works Committee.

“The state of Delaware should be able to count on the support of the [U.S. Army Corps of Engineers] and other federal agencies to help restore our beaches and make sure our communities are protected.”

The next restoration phase will span the majority of the state’s coastline and will require DNREC to partner with the Army Corps of Engineers and affected communities to restore the coastline.

“The long duration of the storm and the post-storm wind direction mean we may not see a rapid natural rebuilding of the beach,” said DNREC Shoreline and Waterway Section administrator Jesse Hayden. 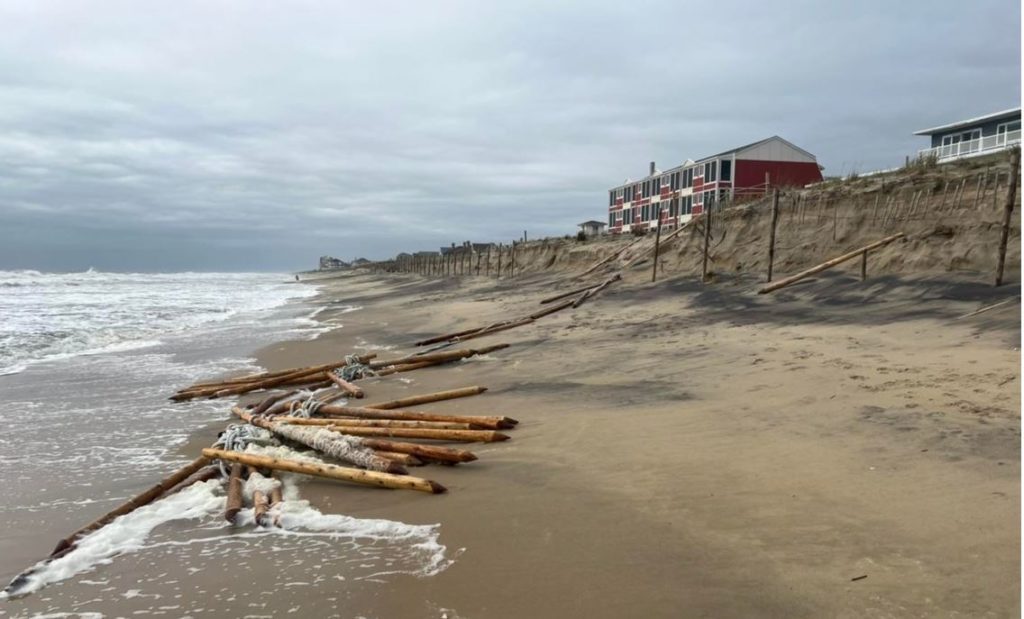 “The dunes did their job protecting our communities from being inundated, but by absorbing the impact of the storm they suffered damage that affects people’s ability to access the beach,” Hayden said. “Our immediate goal is to restore as much safe beach access in as many communities as possible so that beachgoers can enjoy a safe and enjoyable Memorial Day weekend.”

DNREC’s post-storm work is set to begin this week in South Bethany, the community worst hit by the storm, and restoration work will then move south to north.

In each community, DNREC will clean up debris including smashed dune fencing and will re-grade numerous access crossings.

“The first pass made by our team will focus on cleanup and restoring access,” Hayden said. “When that work is done, we will begin repairing the damaged dune fence.”

DNREC’s beach nourishment projects introduce sand into the shoreline system to offset the effects of erosion.

The beach and dune are an important natural line of defense between the ocean or bay and inland public and private infrastructure, including houses and roads, according to DNREC.

The Delaware Bay, Atlantic beaches and dunes along the coast provide crucial habitat for migrating shorebirds, including several threatened species and other wildlife, such as spawning horseshoe crabs.

However, after Pickering Beach was impacted by a nor’easter on April 18, the Shoreline and Waterway Management Section requested and received approval from DNREC’s Division of Fish and Wildlife to replace sand that had washed onto the road there back onto the beach.

The sand was then reshaped into a dune at Pickering. The other Bay beach communities experienced some erosion of newly placed beach and dune sand, but none of the towns where the nourishment was made experienced overtopping of the dune from the most recent nor’easter.

Several bay beach communities experienced minor impacts from the more recent nor’easter that caused widespread erosion on the both coasts. Some of the truck-hauled sand from that project was moved around and lost because of the storm.

The winter beach nourishment at South Bowers, Bowers Beach, Kitts Hummock, Pickering Beach and Slaughter Beach largely held its ground and worked to protect the communities in the face of high tides and winds, DNREC said in a press release Monday.

Future nourishment is planned along both the Atlantic Ocean and Delaware Bay coastlines.

Along Delaware Bay, DNREC will perform small-scale nourishment to further fortify the most vulnerable sections of shoreline.