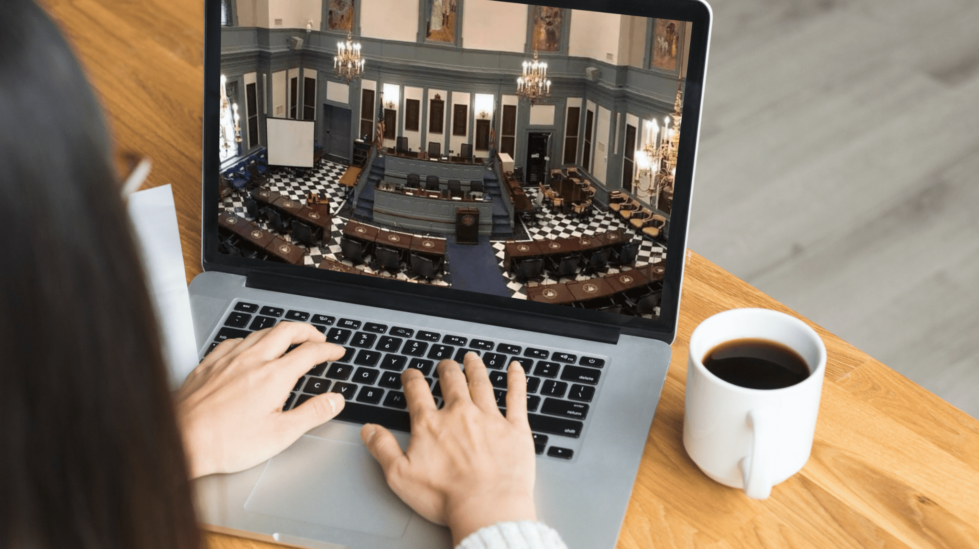 House and Senate committee hearings will be held in “hybrid format” in 2022.

When the General Assembly reconvenes in January, it will begin to hold all of its committee hearings in a hybrid fashion, with legislators attending in-person and members of the public having the opportunity to watch and provide comments online.

But in a press release announcing the move, House and Senate leaders stopped short of inviting members of the public to attend committee hearings in-person.

That, they said, “will depend on the public health guidance as of early January.”

Democratic leaders framed the press release to suggest that hybrid meetings were the subject while implying that members of the public may not be allowed to return to Legislative Hall in January.

“Throughout the COVID-19 pandemic,” the press release said, “committee meetings held outside of the legislative chambers have been conducted exclusively via Zoom, giving the public an opportunity to fully participate in the legislative process, despite Legislative Hall being closed to the public.”

Virtual committee hearings resulted in record participation rates. Meetings conducted on Zoom routinely drew more than 50 members of the public, while several drew more than 100, and a few surpassed 500 participants.

Republicans in the House and Senate welcomed the news of the hybrid sessions but said that the General Assembly must allow members of the public to attend hearings in-person, as well.

“Using technology to increase citizen accessibility is a welcome development and one that our members supported for many years before the arrival of the pandemic,” said House Minority Leader Danny Short, R-Seaford, in a statement to Delaware LIVE/Town Square Delaware.

“Having said that, virtual communications should complement, not replace, in-person participation in crafting public policy,” Short said. “The ability of stakeholders to passionately advocate for the issues they support through face-to-face interactions with their elected officials is a core attribute of our democratic process and something that cannot be replicated with a Zoom call.”

Senate Minority Leader Gerald Hocker, R-Fenwick Island, said Senate Republicans support the hybrid model, but that “in-person participation is necessary and maintaining the ability to take part virtually will ensure that the public has more opportunities to interact with their elected officials.”

Speaker of the House Pete Schwartzkopf, D-Rehoboth, said virtual committee meetings were necessary to allow the legislature to continue operating while giving constituents the ability to still participate in the government process.

“What we found was that people liked the convenience of being able to attend committee meetings and provide comment online,” Schwartzkopf said. “We saw the proof in record committee attendance and participation during the past year.”

He said that while the legislature does plan to return to in-person committee meetings, by offering an online option, “we are combining both worlds as we continue to modernize our legislative process.”

Senate President Pro Tempore Dave Sokola, D-Newark, said that while we all long for normalcy, that doesn’t mean we shouldn’t retain some of the things we learned during the pandemic.

“When we made virtual participation possible for Delawareans, we increased interest in the legislative process, got more robust feedback on critical legislation, and made it possible for stakeholders to seamlessly move from one virtual committee hearing to another,” Sokola said.

“For those who miss being back in the building, we can’t wait to welcome you back as public health protocols permit. But for those who appreciated having the flexibility to participate in the legislative process on your lunch break or as you were picking up the kids at school, that accessibility will remain in place.”

While a decision about an in-person return to Legislative Hall – and the use of a hybrid virtual/in-person committee hearings – will depend on the public health guidance as of early January, the public will be able to watch committee hearings live and later playback recordings of the proceedings on the General Assembly website.

According to data from the Division of Public Health, 85.8% of Delaware’s 18+ population have received at least one dose of a COVID-19 vaccine. Approximately 61% of all eligible Delawareans are fully vaccinated.

The press release did not indicate a threshold that would permit the continuation of in-person hearings.

This story has been updated to include responses from House and Senate Republican leaders.