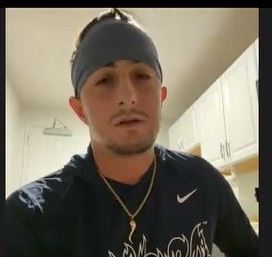 Mike Annone has been grinding his way to the next level at each step of his baseball career.

As a high school short stop for Concord High School, Annone was lightly recruited prior to a breakout senior season that landed him an opportunity to commit to Wilmington University.

Even after a stellar college career, Annone left Wilmington in 2017 undrafted and unsigned by any MLB teams.

Tthat didn’t stop the left-handed batting infielder from going after his dreams.

Now at 27 years old, he finds himself playing in one of the most prestigious Independent Baseball Leagues in the country, in front of many MLB scouts, only one call away from an MLB contract.

His story and experiences through the Independent Leagues will captivate any baseball fan or person who likes to see people pursue their dreams.

While at Concord High School, Annone was a dual sport athlete, playing both football and baseball.

He describes himself as a “bit of a late bloomer” athletically. Mike didn’t start on the Concord Raiders baseball team until his junior year.

“I wasn’t the best, or most gifted athlete, but I worked my tail off,” Annone told Delaware Live Sports.

That work ethic has paid off for Mike Annone through the years, and one of the first signs of that was his 2012 breakout senior season.

The short stop was named First Team All-State for a Raiders team that finished 17-1 atop the DIAA entering the playoffs.  He also was the runner-up for Delaware’s Gatorade Player of the Year, losing out to Mitchell Moore of Dover High School.

“If I didn’t have that senior year, who knows where I’d be,” said Annone.  “That was my breakout year, and that was the first time I heard from Aug (Brian August, Wilmington University manager).  He called me after the season, and at that point I hadn’t signed a scholarship.  I didn’t have any offers…… Without that year, man, I don’t think I’d even be playing baseball right now.”

Annone chose Wilmington University over Delaware State University after his stellar senior season, and that’s where the next part of his story began.

While at Wilmington University, Annone was a staple of the best era in school history.  WilmU has always been a well decorated baseball program but from 2013-2015 they were building something special.

This was a team where 17 of 31 players played high school ball in the First State. In 2015, they won the NCAA D-II East Regional Championship and a berth to the NCAA D-II World Series, while going 37-15 on the year.

That year, Annone led the team with four home runs, while batting .304 and driving in 39 runs in 47 games.  He was named First-Team All-CACC.

“Absolute blast,” Annone said of that year. “That whole year was a ride because we were building the previous two years…. And we just catch fire and we were meshing as a team.  I’ll look back on that team as one of the best teams I’ve ever been a part of.”

Annone would graduate in 2017. Once again, the power hitting infielder was overlooked by MLB scouts. Without a contract in-hand, many players would perhaps hang up the cleats, grab a 9 to 5, and play beer league softball a few nights per week.

Annone just felt like he wasn’t done with this game.

“I was working out at Maple Zone Sports Institute (baseball training facility in Pennsylvania), and I had a friend ask me if I wanted to keep playing, and I said yeah,” Annone said. “He put me in contact with this guy T.J. Zarewicz.”

Zarewicz was the manager of the Santa Fe Fuego, an Independent League team from the Pecos League.  The league includes teams from California, New Mexico, Arizona, Colorado, Kansas and West Texas.

“[Zarewicz] told me I could try and win a job out of spring training, he liked my numbers, he liked how I talked, and my mental aspect,” continued the free agent, “and that was all I needed, honestly.”

The opportunity allowed Annone to keep his dream alive.  He would spend countless hours training and reconstructing his swing over the coming months to get himself ready.

His 2018 season in the Pecos League was terrific. He finished second in the league with a .384 batting average. He also belted 17 home runs and drove in 84 runs during the 62-game season.

Not a bad professional debut.

“That league gave me a shot and, honestly, saved my career,” Annone reflected. “Without Santa Fe in ’18, I don’t know what I would be doing.”

Not many ball players are willing to make the sacrifices and commit to the grind of playing in a league like Pecos. It’s a fairly low-level Independent League, but for players with the drive of Mike Annone, a league like the Pecos can be a breeding ground for opportunity.

A huge season can put a player on the radar, and that’s what happened to Annone.

In 2019, he took a step up in competition, and also took a leap professionally.  Annone hired an agent, Oscar Suarez.

Suarez has been an agent with the MLBPA since 1988, and has represented former big leaguers such as Elmer Dessens, Juan Castro and Joakim Soria, among others.

Annone landed in the Pacific Association of Pro Baseball Clubs, playing for the San Rafael Pacifics and being a middle of the lineup presence for a championship team. He posted a .304/8 HR/27 RBI slash line in 53 games there, cementing his name among the great offensive players in unaffiliated ball.

2020 was set to be the breakout professional year that Mike Annone had been waiting for since he was little kid.  Then COVID-19 hit and shut down the World.

“I was starting to wonder if my career was over,” Annone said.  “I’m getting older and started thinking about all these things, and I wasn’t able to do anything.”

Players like Mike Annone, who were scratching and clawing for an opportunity, were left with little options. Much like he did late in his high school career and after his college career, he refused to give in.  He just kept grinding.

By the end of Summer 2020, a few opportunities presented themselves, and Annone would play 20 games throughout cities like New York, Indiana and California.

It was then that Annone said he learned a valuable lesson in baseball, and in life.

“Control what you can control,” he proclaimed.  “If Maple Zone ain’t open, or your training spot ain’t open, find a cage.  Take ground balls, hit off the tee, stay mentally locked in because you never know when opportunity will come around.”

There was uncertainty in the future, but Annone received feedback from his agent and others in the baseball world that 2021 would still be filled with opportunity.

This year has brought Annone the greatest opportunity thus far in his professional career.  He has found himself playing in two prestigious, high-level Independent Leagues in which a ton of Major Leaguers have graced the fields he now plays on.

He started this season out in the American Association, which also houses former DMA standout Tyler Hill (Winnipeg Goldeyes).  Annone’s team, the Houston Apollos, play in the South Division.  Annone played 26 games for Houston, collecting seven doubles and driving in five RBI prior to his release.

Houston was a late add to the League and did not have a home park. That means they have 90 games, all on the road and a schedule in which they travel to a new city every 3 days.

Annone recalled a road trip in which they played an extra inning game in Sioux Falls, South Dakota, that ended at 11:30 p.m. local time. The team had to load on the bus and drive overnight to Jackson, Tennessee, for a 6 p.m. local time first pitch the next day.  The drive took over 12 hours, and many of the players played that night with under three hours of sleep, or some with none.

These Leagues are not for those who are only half interested in a baseball career.

The bones of the American Association go as far back as Ted Williams, Mickey Mantle and Willie Mays, all of whom played in this league at one point in their careers. Current major leaguers Max Scherzer, Brandon Kintzler, James Paxton and David Peralta also played.

In 2005 a combination of the Northern and Central Leagues from Minor League Baseball’s realignment, formed the “super” Independent League it is today. Five players have been signed to major league teams already in the month of July from this league.

After his release from the Houston Apollos, Annone was going to head back to where his Independent career began, the Pecos League. After a game with the Trinidad Triggers in Colorado, Annone found himself in the Denver airport.

His agent called and asked to meet at the home of the Rocky Mountain Vibes of the Pioneer League for batting practice for a team that desperately needs offense.  With no time to stretch or warm up, Annone stepped into the cage and lit up the stadium. He put balls over the wall and off the wall.  After the batting practice session of his life, Vibes manager Mattias Carillo offered Annone a contract.

Through four games with the Vibes, Annone is 5-12 with a double, run scored and three walks so far.

The Pioneer League is another storied league in the United States. It has long been a staple of Minor League Baseball until this year when minor league baseball was severely trimmed to four affiliated teams.

This has turned the Pioneer League into an MLB Partnered league, which means it is a developmental program, funded by Major League Baseball. Scouts can sign players whenever they want.

To follow Annone, go to https://www.milb.com/rocky-mountain. Their schedule mirrors MiLB’s with seven-game series refreshing every week.