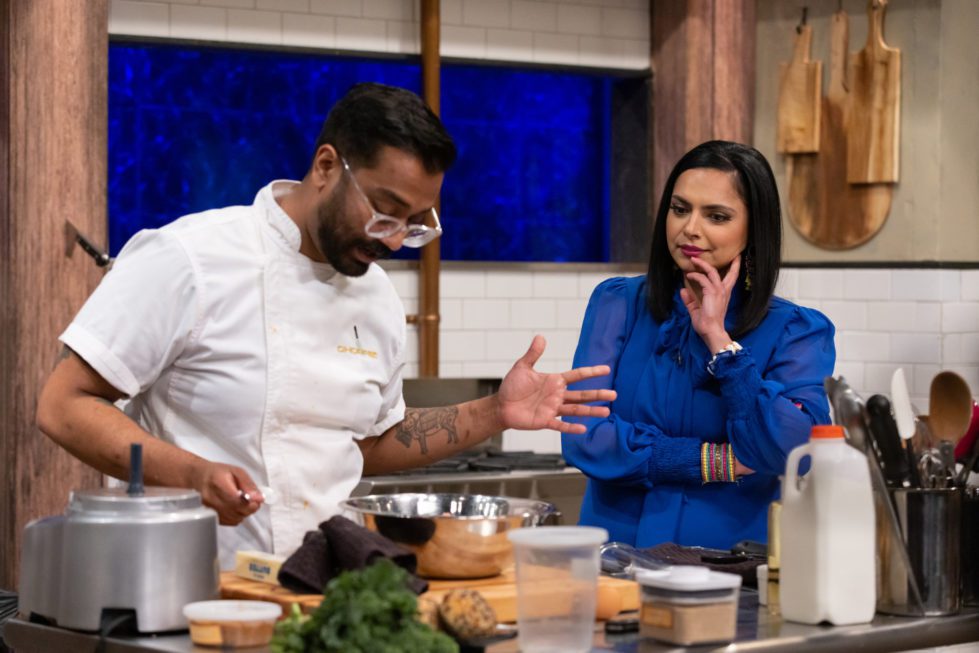 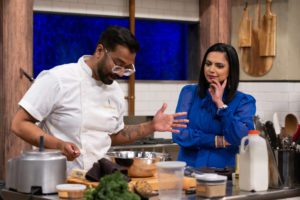 “If you want to work for me, you’re going to have to stay composed, be creative and manage the clock,” Santos told the four contestants, who had each won their respective semifinal battles against four other chefs.

“Sounds like a plan,” replied Dhanawade, a chef at the University of Delaware.

“That’s what I’m going to do,” added Laura Windham, a lead cook at King + Duke in Atlanta.

But managing time proved to be Windham’s downfall. She left the Mexican corn ravioli in the fryer, which led to her elimination.

Dhanawade, however, did well with the appetizer basket ingredients, which also included baby bok choy, monkfish liver and yuzu kosho. He made a monkfish liver taco with a street corn ravioli crema topped by bok choy salad. 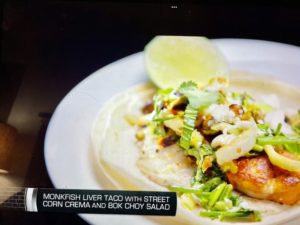 “I love what you did with the taco,” Santos told him.

Chauhan was also impressed that Dhanawade went in a Latin direction after seeing the street corn. But Conant wanted more restraint.

Determined to take the judge’s advice to heart, the Delaware Technical Community College grad approached the entrée basket with an eye on simplicity.

The Delaware chef made a seared pork cutlet with zucchini, panzanella with a green chickpea-and-peanut butter sauce.

“I took what Chef Scott said to heart and kept it simple,” he told the judges.

Simple, however, means making sure each ingredient has as much flavor as possible, Conant responded.

The sauce didn’t save him, however. 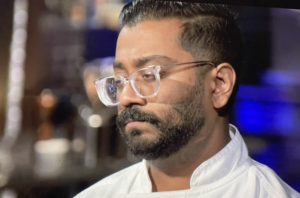 He was chopped, leaving Mat Espiritu and Francisco “Paco” Moran to duke it out over dessert. Paco emerged victorious and started working with Conant.

In Delaware, Dhanawade acknowledged that it’s difficult not to retrace the steps leading to his elimination.

“I’m proud of what I accomplished, but I know I could’ve done better,” he said.

Granted, even the world’s most acclaimed chefs might find it challenging to create a dish with monkfish liver.

“The best part was the friendships with the other chefs — 100%,” he said. “They were all so amazing and talented. I genuinely made friends for life.”

On the program, he stressed his desire to work with Chauhan, who is Indian.

“Working with Chef Maneet would be an absolute dream come true,” he said during the finale. “I was born in India, but I shied away from Indian cooking. I need Maneet to help me get back in touch with my roots.”

“I’m so pumped,” he said. “There have been plenty of opportunities that have shown themselves the last few weeks.”

In other words, he said, “Stay tuned.”