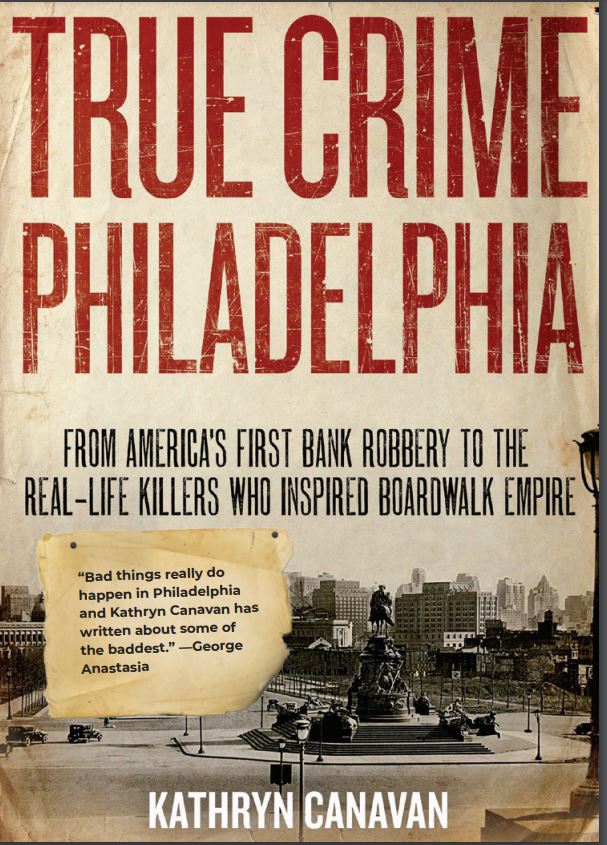 When a publisher asked Delaware’s Kathryn Canavan if she’d be interested in writing a true crime book about Philadelphia, she had an instant response.

I don’t write about crime, Canavan told her.

But, the publisher protested, you wrote about the assassination of Abraham Lincoln.

Opening point to the publisher.

Canavan, who lives in Deerhurst, earned a lot of praise and attention for 2015’s “Lincoln’s Final Hours: Conspiracy, Terror and the Assassination of America’s Greatest President.” It revealed details of the day that weren’t yet known, amazing and delighting assassination experts.

Focusing on crimes from the 1700s through the 1950s, Canavan found Philadelphia not only opened the first free library in the country, but also had the first kidnapping, the first bank robbery and the first octo-murder.

She discovered a ring of women who murdered their husbands for insurance money and then went to a matchmaking service run by the ring to find another spouse. Notorious Chicago hotel murderer H.H. Holmes was convicted in Philadelphia and hanged in an execution that turned into black comedy. And a bank robbery that turned into a public spectacle somewhere between the “Keystone Kops” and the race scenes in “It’s a Mad, Mad, Mad, Mad World.”

Her book proves that Florida Man has nothing on Philadelphia Man, or Men, or Woman, or Women. And the public involvement in many crimes — people in apartments dropping guns and ammo to strangers on the street to help battle a bank robbery — is amazing.

Rather than being hard to stomach, Canavan said, slipping back in time was fascinating and even a break from the anger everywhere in today’s world.

“It’s kind of fun to slip back into the 1950s and write about four guys in Philadelphia pulling off the biggest house burglary in Pennsylvania,” she said.

Quite unexpectedly they discovered $500,000 in cash in the house’s basement and then had to figure out how to take it with them.

“They drove away in a yellow Lincoln holding piles of money in their laps and screaming an Irish drinking song at the top of their lungs,” she said.

One of the robbers used part of his loot to build a house that resembled the house they had robbed, painted it white like that house and carpeted in blue, because he had liked the interior decorating.

Canavan relied a lot on old newspaper reports, coming to treasure the writing and reporting of The Philadelphia Inquirer’s Owen McDonnell and George M. Mahwhinney. She found an archive of photos from the now-defunct Philadelphia Bulletin at Temple University libraries in its Urban Archives and Special Collections Research Center.

Along the way, she discovered fascinating reports, such as a woman who had a baby  at 5 p.m. one night and its twin late the next day. The “Mad World” bank robbery knocked the mom’s story off the front pages. She found a bride who tripped going down the aisle and died was buried in her wedding dress. There was a maid who also operated in Wilmington dubbed “30-minute Gertie” because she could strip a home owner of all valuables in less than half an hour. And a Black attorney named Pace Anderson who had attended Harvard Law School and won the case for one of the aresenic widows.

Canavan discovered tragedies — a 22-year-old Black maid who had the mental age of 8 and was denied help her entire life because of her race. She robbed and killed her employer in a plan people believe her boyfriend set in motion. Pace Anderson couldn’t get her execution stopped.

One of Canavan’s surprises was how much more flamboyant the personalities of the criminals and cops are than today’s.

The organizer of the “Mad World” bank robbery became a local legend and when he was executed, thousands of people attended his funeral. One cop who tried for a decade to convict a sexy night club owner was praised for his police work, only to have people realize after he died that he’d actually had two families the whole time.

“One of the things I realized was that for 300 years, Philadelphians really stepped up when anything would break badly and made a difference,” Canavan said.

Passersby rallied to help stop the bank robbery. A 61-year-old bookmaker jumped off a trolley car to chase down the 21-year-old killer of a civil rights activist. A stranger recognized a prison escapee within 18 minutes of his escape, after he’d spent nine months tunneling under the prison wall. Neighbors figured out a woman who fell from her balcony had been killed by a fireplace poker.

Her book sets itself apart about with hundreds of footnotes that tell readers exactly where she got the information and by the lively prose that’s drawn praise from reviewers and other writers.

Now she plans to turn back to the Lincoln assassination now, writing a book on the women involved in the case.

She’s followed the trail of one of the eyewitnesses to California, where the woman finally settled.