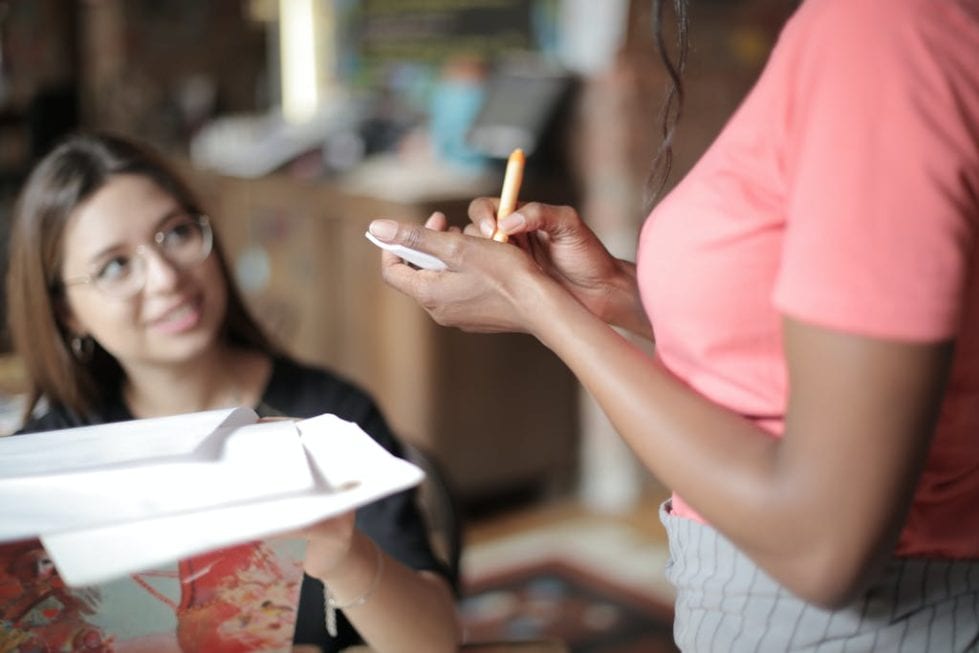 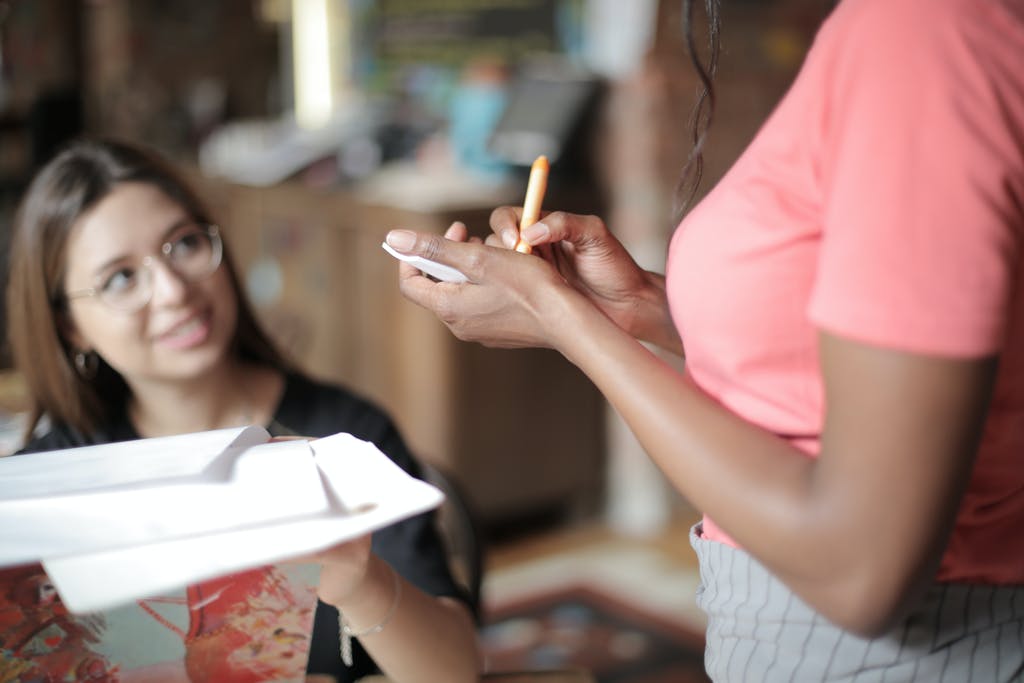 Servers and bartenders now earn a $2.23 base wage, based on a 1983 law. Photo by Andrea Piacquadio from Pexels

Daniella Hougentogler’s first job in the restaurant industry was being a hostess when she was 16.

The Stanton resident became a server when she was 21, then started bartending. She tried life as a pastry chef before returning to bartending, which is what she does now at Eggspectation in Newark.

During  Hougentogler’s 16 years in the industry, she supported herself, paying her way through the University of Delaware, earning a bachelor’s degree in dietetics and now working on a master’s in human nutrition there. She buys herself a new car every few years.

But now she’s worried that a bill introduced in the Delaware General Assembly would put paid to the life she’s been able to build on tips.

If signed into law, the bill would dramatically raise the base wage paid to people who earn tips. That could have a ripple effect that would actually destroy income for servers and bartenders; raise the cost of menu items; and put some restaurants out of business. It also will dramatically raise costs for employers who not only will have to pay nearly four times as much to servers, but must pay higher costs for things such workman’s comp insurance and unemployment benefits, which are based on payroll costs.

And everybody in the restaurant industry continues to point out: Restaurants still haven’t returned to full strength either in sales or employment and continue to struggle under COVID-19 restrictions. Changes like the a rise in the minimum wage or the tip wage will cause more and perhaps unsurmountable financial turmoil, they say.

Restaurants will advocate in full force against any effort that blocks their recovery, said Carrie Leishman, CEO of the Delaware Restaurant Association.

“We need the state to help do whatever it can to make restaurants healthy and whole so we can keep these people employed,” she said.

Right now, restaurants pay people who can earn tips $2.23 an hour. House Bill 94, introduced by Rep. Kim Williams, D-Newport, would raise that to 65 percent of the state’s minimum wage.

The tip wages bill is a companion piece of sorts to another bill that would raise the state’s minimum wage in increments to $15 by Jan. 1, 2026 — or automatically adopt the federal minimum wage, if it is higher. Under Williams’ bill, the amount paid to servers, bartenders and other would rise with it. If minimum wage rises to $15 an hour, that would be $9.75.

Carl Georigi, president and CEO of Platinum Dining Group, says he believes Williams is basing the bill on her experience as a server in the 1980s, which he says she often has talked about.

“The basic premise she’s working off is that tips employees have not received a pay increase since 1983,” Georigi said. “She’s wrong about that. They have. The amount of their checks have increased.”

He has servers who have bought homes, have put their kids through private schools such as St. Mark’s, and have full-blown careers.

Forty years ago, a cheeseburger was $3, he said. A 20% tip on that was just 60 cents. Now cheeseburger plate can be $15. If a server is earning 20% of that, the tip is $3. That doesn’t include other items that might be on the order, or other tips from other customers.

Georigi said the average dinner check at his six restaurants — Eclipse Bistro, Redfire Grill & Steakhouse, Capers & Lemons, Taverna Newark, El Camino Mexican Kitchen and Taverna Wilmington —  is $75. A 20% tip on that is $11, and servers will service multiple tables and parties in a night.

Leishman said the average server in northern Delaware earns $15 to $22 an hour. A the Delaware beaches, which has year-round traffic, a server earns up to $35 an hour, she said.

Hougentogler estimates she earns $30 to $40 an hour as a bartender. That’s partly because she is motivated to provide great service so she gets great tips. The two can’t be separated, she said.
If the bill passes, Georigi predicted, one of two things will happen.
“It will force restaurants to close because the increase in our payroll cost will simply be astronomical, and we can only raise our prices so much to offset the added expenses of the increased payroll,” he said. “Or we may be forced to institute an automatic service charge so it’s an added expense to the guests. They would still be paying the same for the dinners, and the tip would still be the same as it always was, but the service charge will come through to the restaurant simply to offset the payroll expense.”
Error, group does not exist! Check your syntax! (ID: 11)
If the tip wages jumped from $2.23 an hour to $9.75, that workman’s comp fees could quadruple  from $200,000 to $800,000. “It’s just simple math,” he said.
Leishman said many people seem to want to get rid of tip wages altogether.
“If you look at the end goal, it’s what the Feds are doing, and that’s a call for one fair wage, which is $15 an hour, and the complete elimination of the tip credit because there’s an ideological belief that everybody should be paid the same,” Leishman said.
She said she’s blown away that “we still have a portion of our legislature that is so out of touch with how tipped employees are paid and how much money they really make.”
If the bill passes, some restaurants may switch servers to a flat $15 an hour rate with no tips allowed, some in the industry say. Others will be forced to put fewer servers on duty at one time.
“It’s really easy to staff eight servers on a Sunday when you know it’s going to be busy,” said Hougentogler. “That way you know your guests are going to get the best experience possible, because they’re paying them $2.23 an hour.”
It restaurants have to pay more, they are going to staff fewer people, she said.
“Which means your experience is going to be a lot different,” she said. “You’re going to have servers who are really stressed out in the weeds because there are much less of them.”
Error, group does not exist! Check your syntax! (ID: 11)
She thinks restaurants will hire fewer and younger workers at $15 an hour who will not be as dedicated as veterans who are dedicated to their job.
“Because if I can make $15 an hour anywhere I go, what’s the point?” she asks.
Hougentogler said she was paid $15 an hour as a pastry chef. She couldn’t pay her bills, which is why she went back to bartending.
“You always know that if you’re doing a good job, you’re gonna make more money than the person who’s not trying very hard or is not very good at their job,” Hougentogler said.
Georigi, Leishman and Hougentogler say the servers they know oppose both the minimum wage and tips bills.
“There’s a lot of momentum from the employees that’s starting to gather that suggests a major push from them,” Georigi said.
When Hougentogler graduates with her master’s in 2022, she plans to stay in the industry and find a job in food service dietetics.
“They think they’re doing everybody a favor, you know, but they’re really not,” Hougentogler said. “They’re hurting the restaurants and, in the end, they’re hurting themselves. They’re not going to have these places to go anymore. The Applebee’s and the TGIFridays are gonna be OK. But all of these local restaurants are done.”