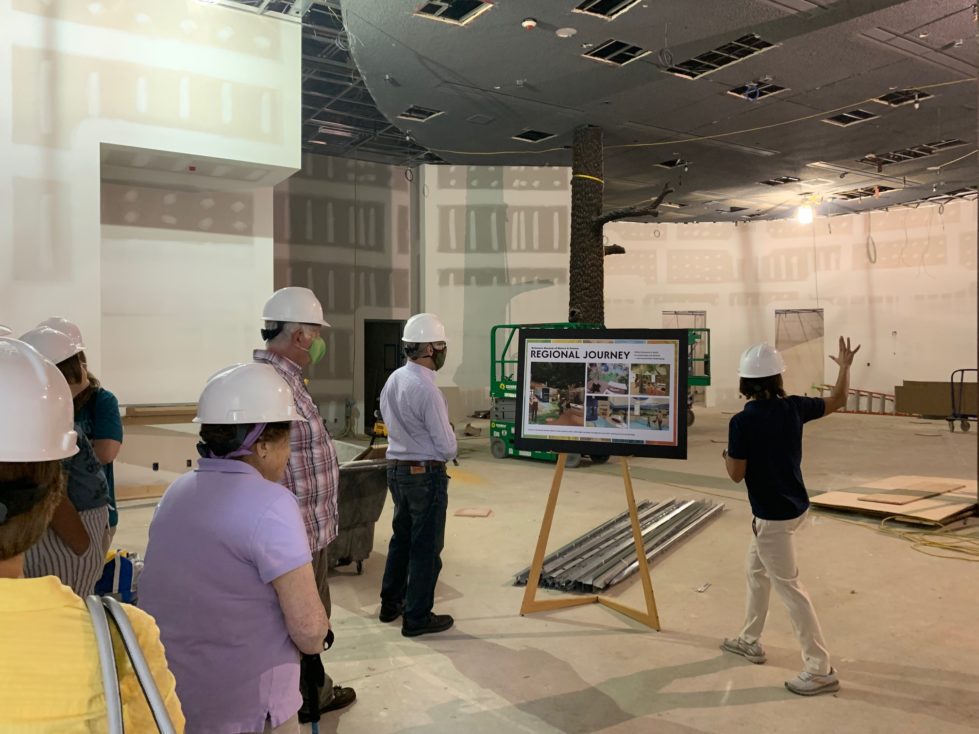 One area of the renovated Delaware Museum of Natural History will focus on the state itself.

The Delaware Museum of Natural History will finish its metamorphosis next year and reopen May 13, the day of its 50th anniversary.

The $9.8 million reinvention of the museum, founded by a du Pont with a huge shell, bird and egg collection, will end with a new name: The Delaware Museum of Nature and Science.

The new moniker will better reflect its rebirth as a series of eco-based exhibitions designed by Reich & Petch Design International in Toronto.

“Surprisingly, COVID actually has made this a lot easier to talk with people from another country,” said Darcie Martin, director of development. “Zoom has just been really easy for us and we don’t have to travel.”

Longtime favorites including the T Rex will stay, and all the changes will take place on the first floor, within the museum’s footprint.

“Concrete is expensive to break through,” Martin said.

The museum spent a huge chunk of the 20-teens asking members and visitors what they’d like to see. Fundraising for the reinvention began in 2017, and the museum now has raised $7.4 million toward its goal.

A $9.8 million renovation of the Delaware Museum of Natural History will see the entire inside gutted and replaced.

The renovated entrance to the Delaware Museum of Natural HIstory will be turned into an undersea scene, with fish named for donors.

The 20,000-square-feet of exhibit space has been gutted by Bancroft Construction. New walls have been installed. They’re now stark white, just beginning to be ready for exhibit installation.

Fiddly bits poke out here and there, include pipes for a new sprinkler system or supports for a 400-pound elephant head or a whale whose skull came from one that died on a Delaware beach.

The pieces of the former exhibits have been moved to the 2,500-square-foot exhibit hall, which is not being renovated, Martin said. Pieces of the taxidermy now are being checked by curators, who are freezing each piece to kill mold, mildew and any bugs, so they won’t be brought into exhibit.

The second-floor, which houses the museum’s collections, also will not be renovated. Among other things, it holds 36,000 clutches of eggs, the third largest such collection in North America.

The outside of the building will remain yellow and only new signage will change on its 18 acres.

However, changes inside will be apparent as soon as patrons step through the front door.

The glass-walled entrance to the museum, located on Kennett Pike across from Winterthur Museum, Garden and Library, will be transformed in to an underwater scene.

A giant orange squid will continue to glide above guests, and the monster clam will be there. But the windows will be turned into a scene showing schools of fish, each named for a donor who gave more than $2,000 to the reno.

“The whole point of this new museum is to put everything in its place in its ecosystem,” Martin told a recent hard-hat tour of museum members. “That starts as soon as you walk in. You are immersed into our underwater experience before we even get your money.”

The admissions desk, built before desktop computers were common, will be replaced with one that facilitates three computers.

As guests enter the main hall, a tree of life will cover the wall to the left.

“Not only are we moving to ecosystems, but how everything is connected, how our actions here matter,” Martin said. “That’s our big takeaway. Nature is really good at telling you what has happened in the past, but what we really want to do is show you can take that knowledge and impact the future and impact our day-to-day lives.”

Across from the tree, the former canteen is now a bright glass-enclosed space that will have some tactile items and books for guests. It also will double as exhibit space for community organizations. The first exhibit is expected to be a large water table from the University of Delaware that shows how coastal erosion occurs.

Turning down the hall to the left will lead guests to the Paleozoic room, the start of a path that will take them clockwise through the museum, ending back at the entrance.

First, guests will pass a new cafeteria, which will feature vending machines that will include fresh sandwiches along with the usual fare.

One thing guests won’t see is a field of screens everywhere.

“We listened to our members once again,” Martin said. “They said, ‘We come to a museum because we want to see actual stuff. We don’t want our kids on tablets any more.’ So we actually don’t have many screens.”

The paleo exhibit will include a gathering area for talks about paleontology or dinosaurs, and a bubble installed under the T-Rex will allow kids to get a sense of what it must be like have a dinosaur eyeing you for lunch.

This area of the Delaware Museum of Natural History will include the paleozoic area.

Paleo will shift to a rain forest and then to the African savannah, complete with a hyena. Guests will move into the arctic tundra and then into oceans.

That area will include an alcove of five monitors that show changing scenes and sea creatures such as a strawberry squid. When the squid goes by, a light will illuminate the museum’s strawberry squid, among other specimens.

The ocean area will include man’s impact on water with acidification and the bleaching of coral reefs.

From there, guests will leave what essentially is the left side of the building by walking under the Delaware whale and over a glass floor  beneath which a sea bed is depicted.

Martin said the museum allows seeing-eye dog trainers to bring their animals in to practice walking over the glass.

Guests will continue down the hall along the back of the museum, past the entrance hall as they have before, and into the regional exhibit.

“We’ve never had anything showcasing our own diverse ecosystems,” Martin said. “We’re going to have a giant floor map that shows the diversity in our own state, in our own backyard.”

Areas in the room will include temperate forests, the Cypress swamp and the Delaware Bay.

The giant tree that stood in the old exhibit there will move to the paleo section. The area in which it stood will be turned into a waterfall that talks about the crustaceans found in the Delaware Bay.

“What we’re trying to do is connect you to what you can find and do in your own state,” Martin said. “Delaware is pretty small, but it’s pretty cool.”

Like the rest of the museum, many of the exhibits will be interactive. They will include a field camp and a research headquarters that allows visitor to sit down and dive into an area that interests them.

The museum is partnering the University of Delaware, the DuPont Corp. and the Delaware Nature Society, among others, to call attention to the science done in the state and the nature that exists here, she said.

“A lot of great companies are in our own backyard,” she said. The research center also will talk about what they do and what young guests can do to grow a career in science, technology, engineering and math.

The last stop of the tour was in the exhibit space, where taxidermied animals and other pieces of exhibits rested in semi-darkness.

Tour members walked past a metal T-Rex head, and huge plastic tarps were draped over polar bears and other animals. Rhino heads were propped on the floor, necks down and horns up.

Some of the items will go upstairs to the collections area when the museum is reopened, Martin said.

A group of Delaware Museum of Natural History members file into a storage area.

Not quite the lion and the lamb, but close at the Delaware Museum of Natural History.

Polar bears in plastic tarp at the Delaware Museum of Natural History.

A stored ostrich at the Delaware Museum of Natural History.

Delaware Museum of Natural History exhibit pieces in storage during a renovation.

This giant clam will reside in the entrance to the Delaware Museum of Natural History when it’s reopened.

Tour guests chat by a giant T Rex head at the Delaware Museum of Natural History.