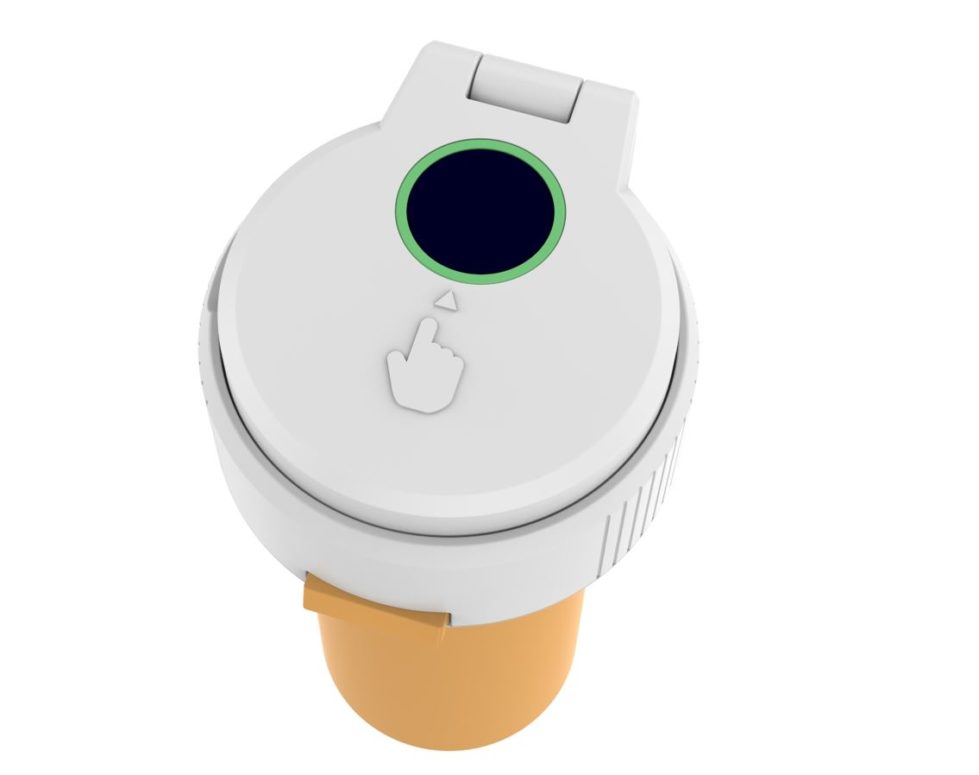 A FortisKap pill bottle cap will require a thumbprint to open and will automatically count remaining pills.

Your bottle of prescribed pills may soon come with a cap that requires your thumbprint to open.

The cap also will be able to scan the inside of the bottle to see how many pills remain and will be equipped to recognize any openings or removals that are unusual.

FortisKap, the brainchild of two Delaware men who created the concept as college sophomores, is designed to keep medicines safe, track usage data and prevent abuse both by the person for whom the pills are prescribed and by people who should not be taking the drugs.

Alexander Colton and Joseph W. White came up with the idea while students at The College of William & Mary in Williamsburg, Virginia.

Colton, a Delaware native who attended Salesianum School, had watched family and friends sink into addiction. He also worked at First State Pharmacy while in high school and saw the issues that drug stores deal with.

“After the prescription medication left the pharmacy, nobody had any understanding of what was going on with it,” Colton said. “It was gone from the whole medical world.”

White’s family lives in Winchester, Virginia, about 20 minutes from West Virginia, which has been hard hit by the opioid epidemic. During his senior year in high school, a nearby town had 20 overdoses in 24 hours.

The two men were sitting talking about the epidemic one day when they came up with the idea of having a lock on a prescription medication device that used a biometric signature, such as a fingerprint.

“We just really wanted to make a difference and prevent that from happening to any other families,” White said.

The two men now split their time between Delaware and Richmond, Virginia, where research, development and design is happening.

They expect their caps to hit the market in Delaware and Virginia in June 2022, barring any supply chain or other issues.

The design and capabilities of FortisKap have evolved since their first idea, which would have allowed a person to simply open the bottle.

“Since then, we’ve better understood our market,” Colton said.

He likes to compare the evolution to a parent marking the level of alcohol in bottles in an effort to deter any kids or other relatives from drinking it.

Today’s FortisKap prototype won’t release the cap from the bottle. Instead, it will open a chute that allows a pill (or pills) out of the bottle.

That means the caps will be able to scan the inside of the bottle, report how many pills were taken and how many are left. It will also register when the bottle is opened, so it recognizes if the bottle is opened at an unusual time or if a lot of pills are taken at once. All of that can be done without the customer having to input anything themselves.

Each customer’s information is available to that customer, and a rewards program is planned to give the user a good reason to adhere to medications. Colton and White hope the cap also may act to help people use their medications as prescribed and have the best results possible for themselves.

The company plans to aggregate all the usage information — in a way that none of it is attached to a specific person — and do more research on medication side-effects, rates of abuse and non-adherence and more.

Ultimately, the company’s marketing material says, that information could help validate abuse and other risks of some drugs and help pass legislation to enhance security and oversight of prescription drugs.

FortisKap does have competition. One way that Colton and White are dealing with that is making sure their product everything that competitors do, and more.

“Our company likes to say that we bridge the gap between medication security and medication adherence in the competitive market space,” Colton said.

One example of that is having the cap report the time and date the bottle was opened, as well as how many pills were removed, rather than requiring a patient to be responsible for inputting information on an app.

While the founders originally planned to focus on opioid use, they came to realize the cap could have many more benefits.

“When we look forming the company and growing it for scale, we are much more of a patient care management company where we feel that diabetes, hypertension and a few other markets that are massive markets have huge applications for FortisKap  where we can help people adhere to their prescriptions better and show them trend lines, side effects and symptoms of what prescriptions they’re taking.”

Some estimates say that 74% of prescriptions are not taken correctly, White said.

That reduces the effectiveness of the drug and can trigger secondary diagnoses or cause additional healthcare expenditures, he said.

“So when you look at who the end patient could be, it’s really anybody who’s taking a prescription with the goal in mind of solving some sort of ailment or illness,” he said.

They foresee things like insurance companies offering lower deductibles in exchange for patients agreeing to use FortisKap.

As of now, the caps also are expected to be reusable, White and Colton said. Customers may be asked to return the cap, which would be reset and sanitized to be used again.

They run through a lot of scenarios about what could go wrong and how it would be handled, and are still working on those.

For example, if Cousin Bill waits until his Aunt Mary, who just had surgery, falls asleep and uses her thumbprint to open her painkiller bottle, the cap would register the unusual opening and alert the patient.

Nothing can prevent someone from stealing medicine, he said, even putting it into safes.

However, FortisKap will raise awareness that something has just happened, Colton and White said.

The company has also considered what would happen if Aunt Mary just didn’t take many of the pills, but left the bottle sitting on a shelf or counter and ignored it.

About a month after the bottle was last opened, White said, FortisKap would like to send Aunt Mary a post-paid return box and ask her to mail back the bottle back to the pharmacy. They would like to have the leftover medicine remain in the bottle, but acknowledge some laws and guidelines might have to be changed to allow that.

If that is an idea that’s adopted, Colton and White hope that the data they are able to generate about use and abuse will help legislators and regulators make good decisions about it.

The company’s name will change this year.

It previously had been known as Cosmos Pharmaceuticals, which Colton and White joke was a grandiose idea of two college sophomores. It now will be known as FortisKap Technologies Ltd.

Colton and White are anxious to introduce FortisKap to the world. They had been making headway in 2019, only to get poleaxed by the COVID-19 pandemic.

They plan to open offices in Delaware in 2022.

“So as the company grows and scales, it’ll be built out of Delaware,” Colton said.