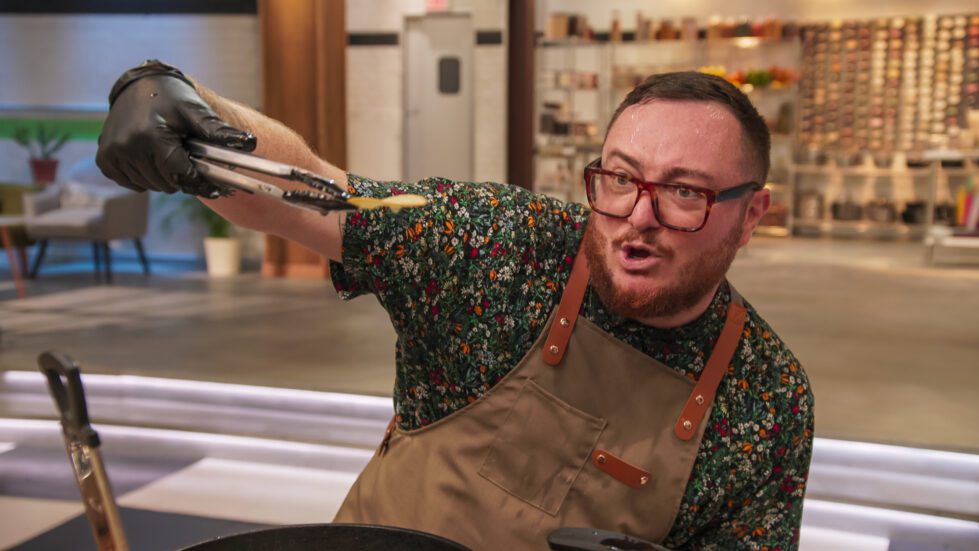 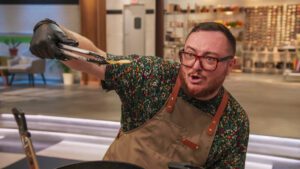 Hari Cameron, who once slung his culinary magic at a(MUSE.) in Rehoboth Beach will compete on Netflix’s ‘Snack VS. Chef.” Photo courtesy of Netflix.

On a November afternoon, Hari Cameron was making dough with a new type of flour.

“I’m always working on stuff,” the Rehoboth Beach resident explained, putting the mix aside to take a phone call.

That’s because the James Beard-nominated chef is a consultant for a kitchen equipment company, and he’s worked with Think Rice, which supports American rice growers.

But Cameron, co-owner of the fast-casual restaurant Grandpa Mac’s in Rehoboth Beach, would play with his food without a contract.

Adept at Instagram, his whimsical creations often catch the eye of TV show recruiters. But until recently, he turned them down.

Then scouts for Netflix’s “Snack VS. Chef” called.

“This seemed like an interesting opportunity and a fun concept for a show,” said the father of three.

On the show, which starts Nov. 30, participants must come up with novel but shelf-stable snacks suitable for a vending machine. They also must recreate the classics. The prize: $50,000.

“It fits into the research and development that I was already doing,” Cameron said of his decision to head to Connecticut for filming.

Up to the task

Cameron’s unconventional upbringing included trips to ashrams and frequent moves so his parents could follow a guru. Eventually, they settled in Sussex County.

He was serving at The Buttery in Lewes when the salad station worker called in sick; Cameron filled in.

“I tried to make each salad as beautiful as I could,” recalls Cameron, who later graduated from The Restaurant School at Walnut Hill College.

He worked at several beach restaurants before landing at Nage on Route 1. Known as an esoteric hotspot for foodies, Nage was a fertile incubator for Cameron, and owner Josh Grapski helped Cameron open his own place, a(MUSE.).

If you know Cameron, you know that the Georgetown native is a culinary wizard who loves to tinker with gadgets, gizmos and ingredients.

At his Rehoboth Beach restaurant, dishes include baby organic kale, dehydrated in a low-temperature oven to make chips or frozen with liquid nitrogen to make kale “snow.” 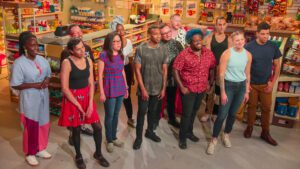 Hari Cameron, in glasses and speckled shirt, with the contestants on ‘Snack VS. Chef.’ Photo courtesy of Netflix.

The desire to show his son that hard work pays off is the primary reason why he joined the 12-member cast of “Snack VS. Chef.”

And then, there was the challenge of making snacks for mass consumption.

That’s not an easy feat for Cameron, who is all about taste and, when possible, natural ingredients.

“I approach everything from a scientific lens of, ‘OK, how can optimize the ingredients, so it eats well and gets to the consumer,’” he said.

His fascination with the chemistry behind the cuisine is ironic since he failed the subject in high school.

“The mole conversions were very difficult,” he explained.

But in culinary school, he always asked about the science behind the recipe.

“Why are we doing this?’ If I can understand the why, I can make the recipe my own,” he said.

Cameron enjoyed meeting the diverse cast on  the Netflix set. The former high school sports enthusiast did not see his fellow chefs as competition. Instead, he only competed against himself.

“I did things on the show that I’ve never done before,” he said.

Cameron wasn’t the only Hari on the set. The Netflix show’s hosts are comedians Megan Stalter and Hari Kondabolu.

Back in Delaware, the consultant is now in good company.

Like Jester, Cameron may get other opportunities; chefs with TV experience often get another call.

“I look forward to doing more in the future.”