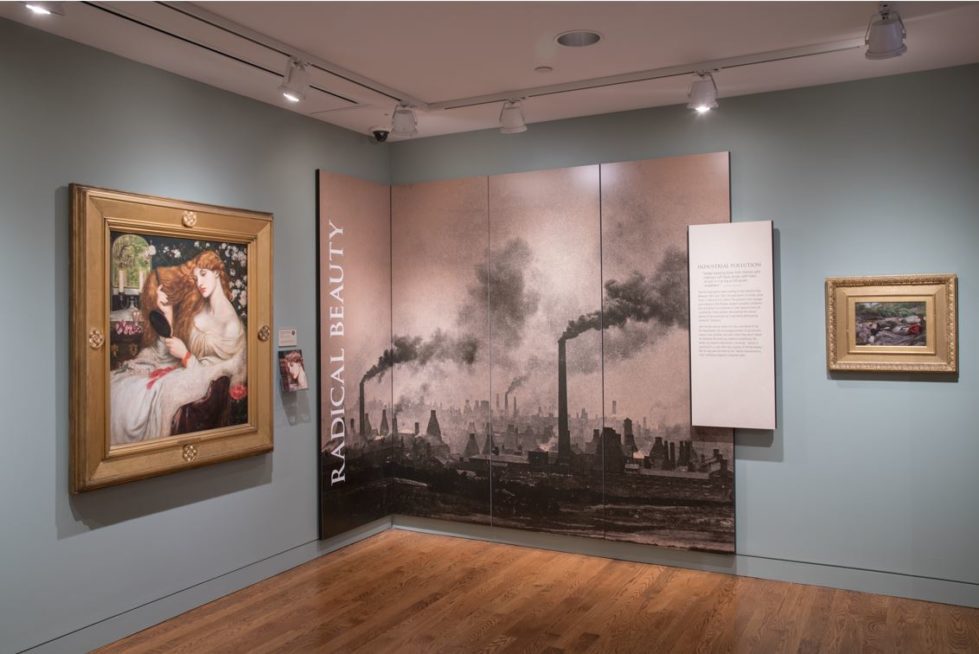 The entrance to ‘Radical Beauty: British Pre-Raphaelites’ attempts to set the work into the history and social movements of the day. Photo by Carson Zullinger.

One of the Delaware Art Museum’s seminal collections has a new home in the building. a few new pieces and new interpretations designed to put the art. artists and models into context.

“Radical Beauty: British Pre-Raphaelites,” has moved into the galleries off the entrance hall that once held a collection of American art. It’s a smaller space, but a vibrant setting that offers more connections to a viewer in a single glance.

The new exhibit was built partly on the reactions of the public and about 100 people who were invited to community salons to talk about they liked, didn’t like and didn’t understand about the Pre-Raphaelite gallery.

Those artists were considered a rebellious splinter group of artists who rejected the trends embraced by the Royal Academy of Art in London. One of its focal points was the work of Italian Renaissance painter Raphael, who painted in the early 1500s.

“One of the most important things for me as a curator was understanding what they didn’t get in the previous installation and what they were interested,” said Margaretta Frederick. the Annette Woolard-Provide curator of the Bancroft Pre-Raphaelite Collection. “And we’ve done a lot of stuff to kind of change that. I think the biggest thing is that people really related to the things that were similar to today.”

The opening sets the artists among the hardscrabble days of the Victorian era as industry continued to rise, taking hold of urban areas. Pollution was rampant, racism was common even with slavery abolished, and women’s rights didn’t exist, although a Queen was head of the country and government.

The new installation also focuses more on the contributions of women.

While many of the portraits of women are lush fantasies of women, Frederick said, “I think it is countered by a real effort on their part to help women move forward in the professional art world in a way that they couldn’t at all. And the women who do survive history as artists at this time are almost all largely helped by these men.”

Frederick said that when she started out, nobody talked about women in that period.

“It’s like they didn’t exist,” said Frederick. But, recently, the National Portrait Gallery in London had a show on the Pre-Raphaelite Sisterhood that was all about the women artists and models. “So, there’s been a real sea change.”

A study of a Black man by painter William Wise has been added to the Delaware Art Museum’s Pre-Raphaelite collection. Photo by Carson Zullinger

Now the hot topic is the non-white people who appear or don’t appear in Victorian art, she said.

Several models of color show up in Delaware Art Museum paintings, including Jamaican Fanny Eaton in “The Mother of Moses.” A new museum audio tour features the story of Eaton, told by her great grandson.

Frederick said the museum was thrilled to add to the collection a study of a black man, complete with dabs of paint to the right side that indicate artist William Wise trying to match the man’s skin tones. Its acquisition was so recent that the museums had to change plans for the installation to highlight the piece.

The work also is “rare evidence of the black model in the Academy,” Frederick said. “We know there are black models because we have paintings where black models appear, but they’ve been pretty much written out of the canon.”

She plans to research more about the model and his story.

One of the new paintings is a 1922 work by Eleanor Fortescue Brickdale, “Botticelli’s Studio: The First Visit of Simonetta Presented by Giuliano and Lorenzo de’ Medici.”

“It’s a great example of how the early Renaissance was really important to them, because this is an imagined scene that Brookdale created set in the 1490s, early 1500s,” Frederick said. It shows a famous Florentine beauty being presented to the artist by her fafound de Medici sponsor, and Botticelli’s own “Madonna of the Magnificat” hangs in the background.

Signage adds context to the works and the period.

One in the gallery entrance hall points out what the Pre-Raphs were rebelling against. Another decodes a painting for the reader to pick up symbolism that may not be common today.

New to the Radical Beauty exhibit is signage that helps viewers understand what they’re seeing. Photo by Carson Zullinger

The Pre-Raphs didn’t stick to just painting. They also wrote poetry, sometimes using it with or in their works. And their rise paralleled the rise of the Arts and Crafts Movement, fostered by William Morris, a friend of many of the painters.

“Although it started as the Arts and Crafts movement, that range of styles that are happening at this time and the decorative arts in England are largely based through London becoming this global city, which is a result of the British imperialism and colonialism,” she said. “The word is appropriation here.”

In addition to paintings, Radical Beauty also features poems, ceramics, stained glass and more. Many use symbols or design or construction methods that are a nod to other cultures.

Among the newly acquired pieces is a stained glass window of “Noah,” by Edward Burne-Jones, arranged near furniture of the time.

The final room in the gallery features the spectacular, and spectacularly big, “The Council Chamber,” by Edward Burne-Jones (1833–1898), depicting the court falling asleep under the spell that puts Sleeping Beauty out. Across from it is a case of pottery, jewelry and other items created by artists of the time.

Frederick said she has been nervous about moving the exhibit to what was a smaller space.

The spectacular ‘The Council Chamber’ still has place of pride at the end of the Delaware Art Museum’s Pre-Raphaelite gallery.

A new stained glass window, ‘Noah,’ is among the additions to the Delaware Art Museum’s Pre-Raphaelite collection.