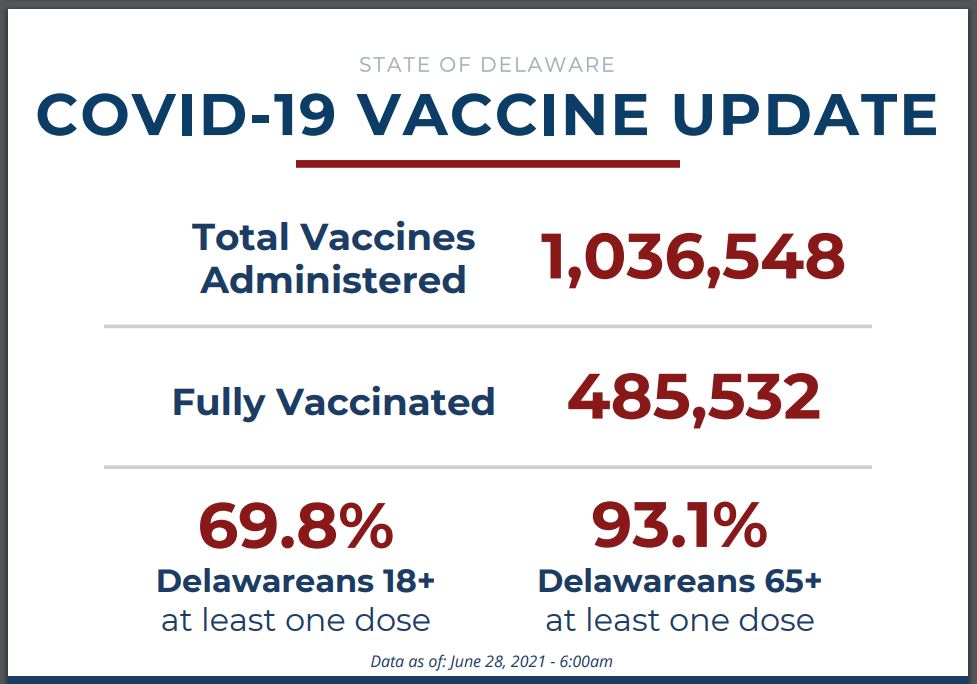 In Gov. John Carney’s last weekly COVID-19 press briefing, state officials announced that the average life expectancy has gone down because of the virus and that pharmacies have been doing a larger part of vaccination over the last month.

Carney said last week that with a rising number of vaccinations and declining number of cases, and with his emergency order expiring in July, it was time to end the weekly briefings.

He said Wednesday the state needs about 1,500 more people to reach President Joe Biden’s goal of vaccinating 70% of its population. The Centers for Disease Control and Prevention said Monday that 69.8% of all Delawareans ages 18 and older have received at least one dose of vaccine.

During the briefing, Dr. Karyl Rattay, director of the Delaware Division of Public health, pointed out that nationwide, life expectancy has dropped by almost two years, largely because of the virus.  Average life expectancy went from 78.7 in 2018 to 76.9 in 2020, the most significant drop since the World War II.

The decline was worse in minority communities. In Black communities the average life expectancy went down 3.25 years while in Latino communities it dropped by 3.88 years

Factors that could affect that included disruption in health care, disruption in disease management and the inability to access behavioral health services because of the pandemic.

The best way to improve life expectancy right now, Rattay said, is to get fully vaccinated.

A.J. Schall Jr. director of Delaware Emergency Management, revealed that pharmacies have been doing a much higher number of vaccinations compared to the state during the last month.

In the last week, 71% of vaccinations given have been through pharmacies while the state did 8% of the vaccinations through 90 smaller vaccination events across the First State.

Schall said demand for the vaccine has dropped significantly from its peak a few months ago. He also said said pharmacies are recognized by the public as a provider of vaccines, especially when it comes to flu.

Rattay said the Delta variant of COVID-19, which has revved up in several states with large unvaccinated populations, hasn’t taken root in Delaware so far. Health officials say it is more infectious and more dangerous. Los Angeles has asked those vaccinated to return to wearing masks because of fears of it spreading.

In Delaware, where the state randomly tests positive cases to see which variant it is, the state has only identified 13 cases in 3,100 tests. The most common variant has been the Alpha variant from the United Kingdom at 933 cases.

Last week the state sequences 62 cases of coronavirus, 42% came back positive for some form of variant.

Rattay said that the best way to protect oneself from the variants is to become fully vaccinated, as individuals with only one dose are still susceptible to the Delta variant.

As of today, the state is currently seeing 19 new cases per day and a 1% positive test rate. State stats show 1,036,548 doses of vaccine have been given and 485,432 Delawareans have been fully vaccinated.