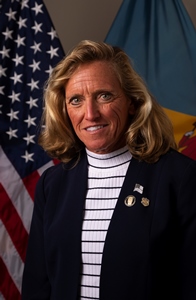 Delaware Correction Commissioner Claire DeMatteis is leaving her job to become special assistant to the governor, a press release said Friday. In that capacity, she will oversee management of the federal stimulus funding received by Delaware and also assist with crisis management projects across state government.

The job does not require Senate confirmation.

DeMatteis previously had been a special assistant to the governing overseeing reforms to Delaware’s corrections system following the 2017 riots that led to the death of Sgt. Steven Floyd.

McGuiness said in an emailed note that she welcomed the additional set of eyes on the federal money coming through the state.

DeMatteis’ role does not affect McGuiness’ Project: Gray Fox, she said. Since announcing the program last week, Rehoboth Beach, Ocean View and Cheswold have signed on to the program, joining Lewes, Newark and Dewey Beach.

Carney will nominate Deputy Correction Commissioner Monroe B. Hudson Jr. to replace DeMatteis. He has been deputy commissioner since 2019. He served for 31 years in the Delaware State Police, rising to the rank of lieutenant colonel and serving as deputy superintendent. The Delaware Senate is expected to consider Hudson’s nomination on June 23.

Carney also will nominate Jacqueline Mette to serve as the next Alcohol Beverage Control Commissioner. She has served as deputy legal counsel for Carney since 2018 and was chief policy adviser for the Delaware Department of Services for Children, Youth and their Families. The Senate is expected to consider Mette’s nomination on June 23.

Mette would replace Commissioner John H. Cordrey, who is retiring after serving for two decades.

“These are all committed public servants who I’m confident will serve Delaware well,” said Carney in the press release. “Together, they have decades of experience in and around state government, and I want to thank them for their willingness to continue serving.”