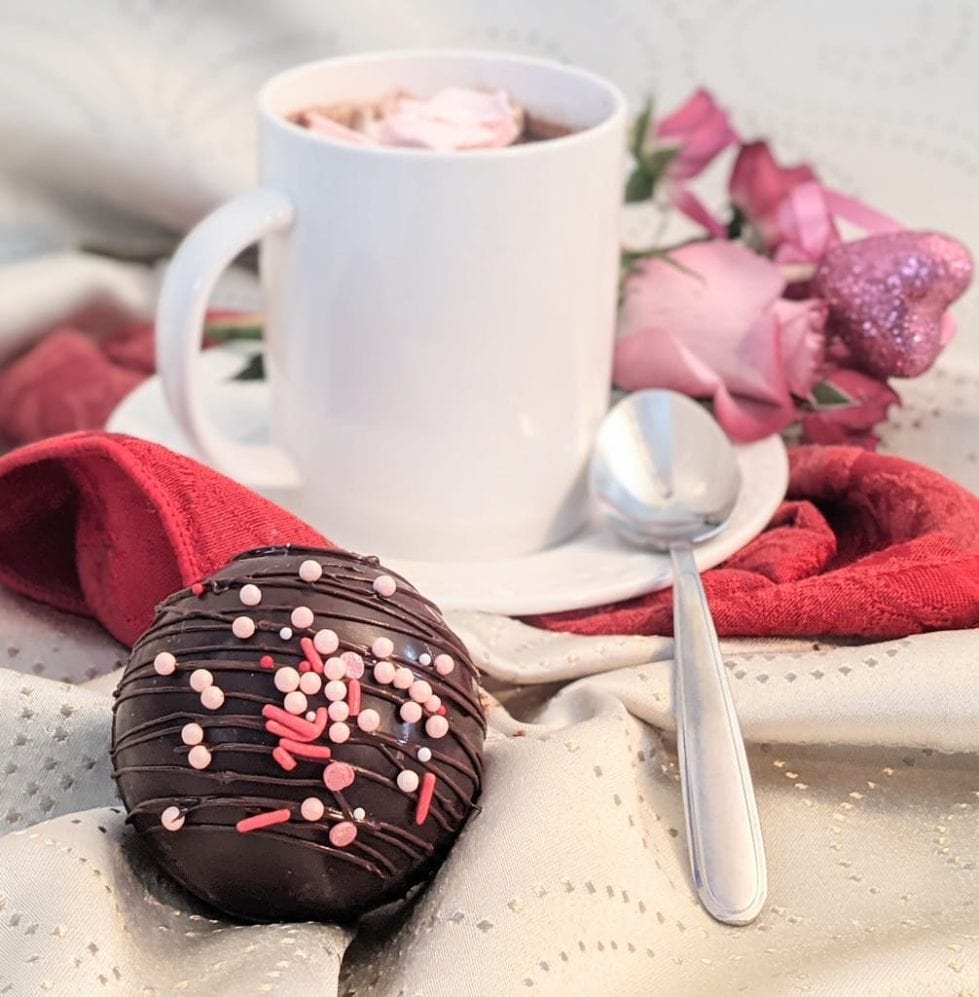 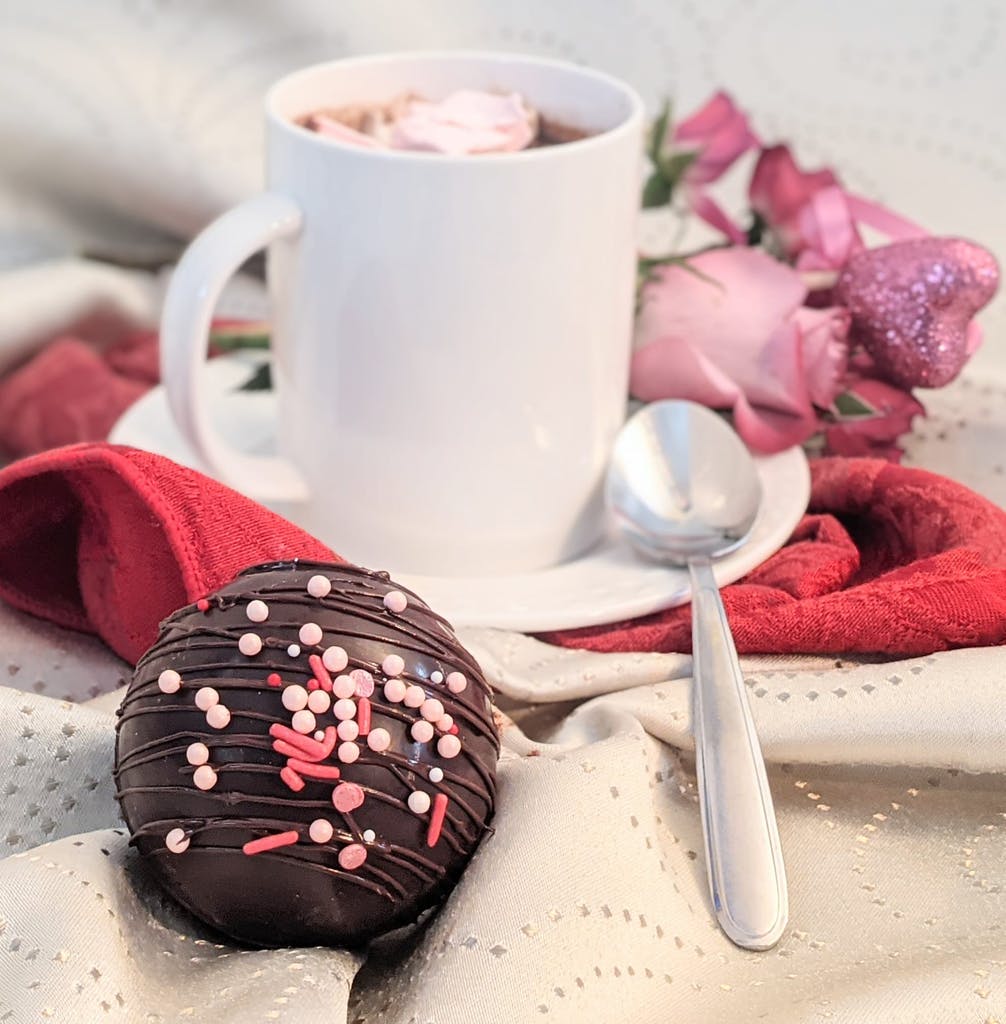 Not so long ago, many Americans turned to yeast and bread flour to cope with the pandemic.

Things, however, have changed.

Now consumers are seeking solace with bombs — hot cocoa bombs, to be exact.

“It’s the hottest thing out there,” says Vincenza Carrieri-Russo of V&M Bistro and the neighboring Ice Cream Delight in Brandywine Hundred, which sells the sweets.

Mimi Sullivan, the owner of the Bloom, would agree.

“Oh, my gosh, I’d never tried them until last fall,” said Sullivan, who sells them at her Newark and Greenville clothing and gift boutiques. “They are beyond delicious.”

They were hot during the holidays and expected to be hot for Valentine’s Day.

What’s the appeal? The hollow chocolate orbs combine the comfort of hot chocolate with a video-worthy experience — often set to music.

Social media is teeming with shots of people pouring hot milk over the bobbing sphere, which starts to melt. Suddenly, marshmallows burst through the shell like a time-release video of a flower unfurling.

“It’s a great, fun little treat to share with family or friends,” Carrieri-Russo says. “I test it out on some adults, and they say: ‘Oh, my God. This is so cool!’”

Carrieri-Russo’s sister and partner, Margherita, discovered the hot chocolate bombs in fall 2020, but the molds were a hot commodity even at that time. While waiting for delivery, she used her cake-sicle mold to make “cocoa-sicles.”

The restaurant now offers cake-sicles, cocoa-sicles and heart-shaped bombs in packages that should be a hit around Valentine’s Day.

Sullivan also learned of the bombs last year. During the holidays, she sold out of four dozen bombs in under two weeks. 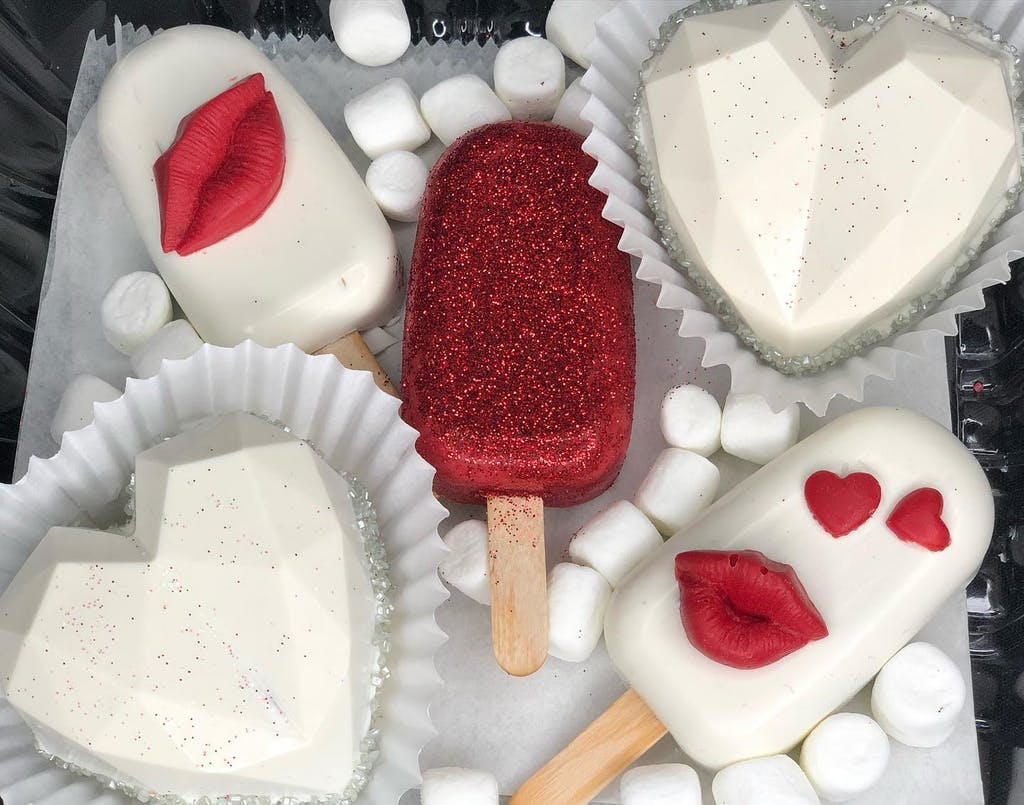 Cocoa bomb molds were so hard to find, V&M used cake molds to get their line started.

All are made organic Belgian chocolate — “the way hot chocolate should be,” Sullivan maintained.

Gisel Grammel, who owns the business with sister Petra Heiss, is known for her homemade marshmallows, so the idea of the hot chocolate bombs intrigued her. But she wanted to still stay true to the brand.

As a result, Gotta Lotta Gelata — which now has a bricks-and-mortar location at 525 Philadelphia Pike — wraps marshmallows with gelato and covers them in chocolate.

“We want you to put it in a latte or chai tea — anything hot,” says Grammel, who compares the product to affogato, a classic Italian dessert made by pouring hot espresso coffee over ice cream.

The sisters also offer an adult version. Consider the BBP Bomb made with boozy bourbon-butter pecan gelato and marshmallows soaked in bourbon.

Gotta Lotta Gelato is not the only gelato or ice cream shop to pick up the bombs. Caffe Gelato in Newark recently ordered some molds.

Bakeries have also joined the movement. For instance, Serpe & Sons in Elsmere sold bombs at Christmas, including one made with white chocolate-hot chocolate powder and crushed Oreos.

“We sold out several times,” Nicholas Serpe said. “We expect them to pick up again for Valentine’s Day.”

The Cake Sisters Pastry Arts Studio in Delaware City also offered hot cocoa bombs for Christmas and will feature them for Valentine’s Day.

And the drinkable dessert is the basis for home businesses like 3 Little Chefs. The Wilmington chocolatier makes made-to-order bombs with a dark, milk or white chocolate shell and either dark or white cocoa mix. Marshmallow flavors include vanilla, cream cheese and strawberry.

Both the white chocolate shells and marshmallows can be dyed to order, which comes in handy for a gender-reveal party. One couple had blue marshmallows to celebrate the impending arrival of a baby boy.

And as a birthday party favor, bombs can’t be beat.

Will the trend last into spring? It’s hard to say.

But along with yeast, they will forever be considered a culinary pandemic survival strategy. 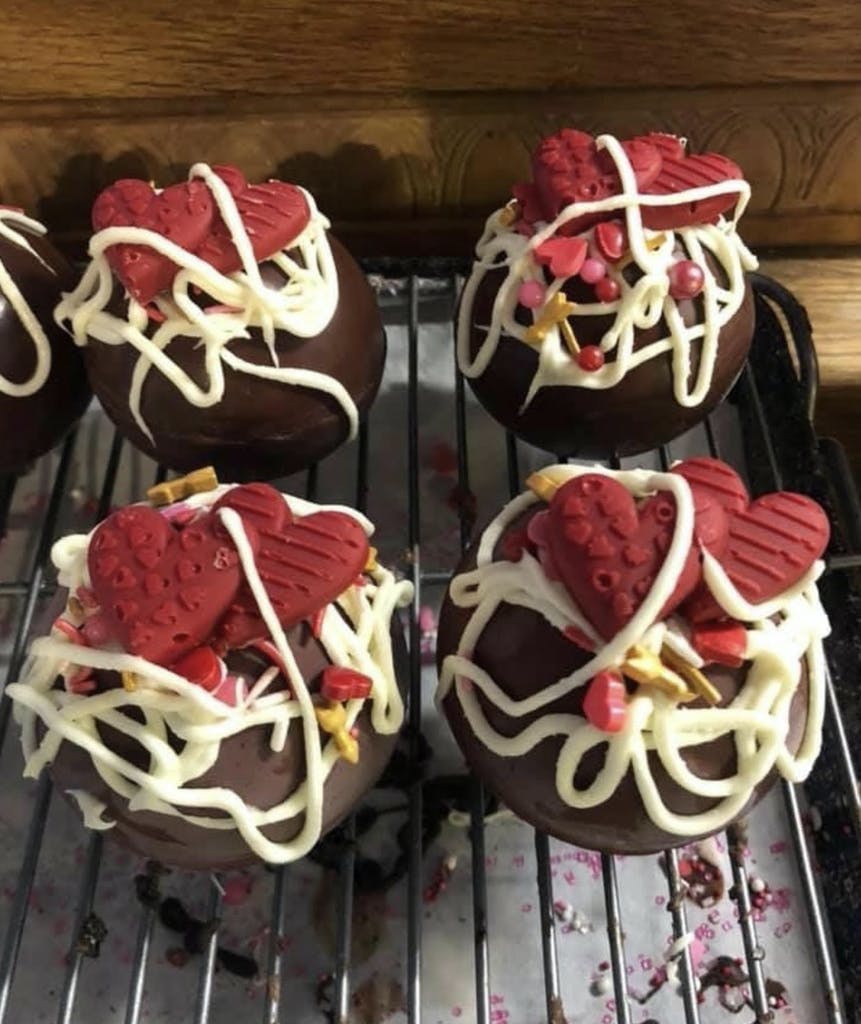 Bloom in Greenville and Newark orders its cocoa bombs from New Jersey.

Call first to make sure they’re still in stock.