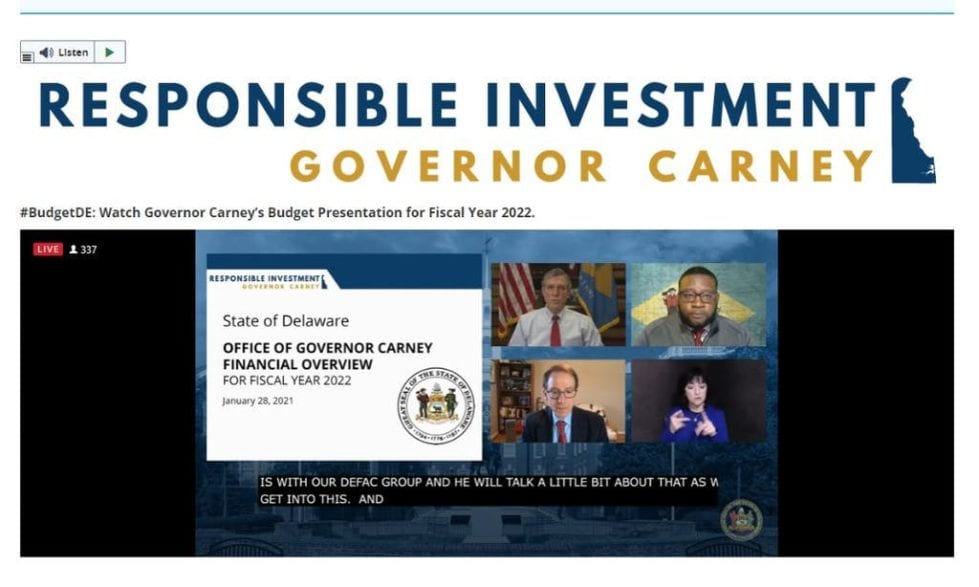 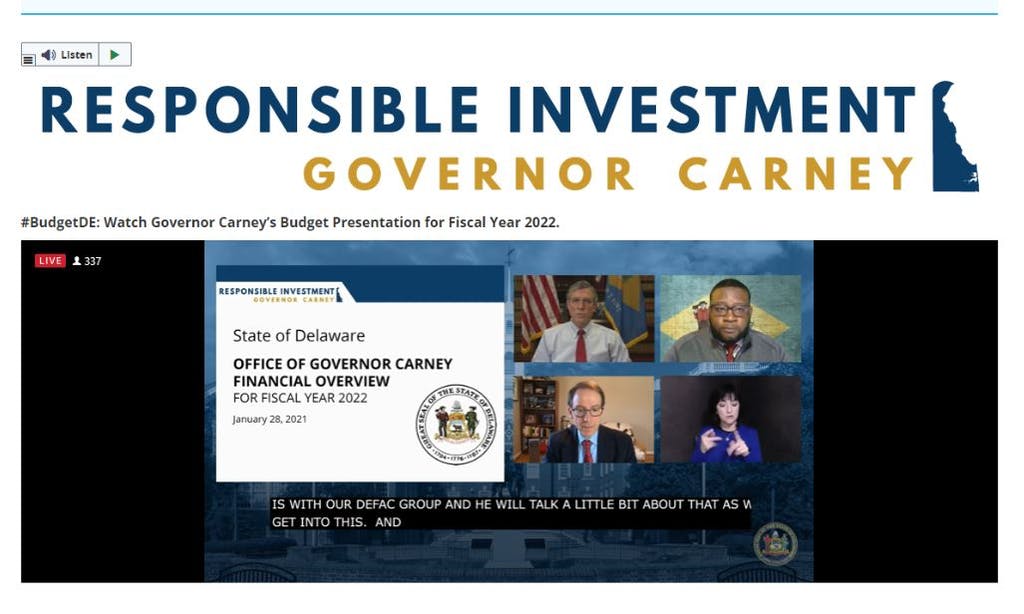 Gov. John Carney’s $4.7 billion budget for 2022 includes raises for all state employees, body cameras for state police, a $50 million clean water initiative, and cash for future COVID-19 expenses that may not be covered by federal bucks.

The governor also proposed a $55 million grant-in-aid bill, which supports nonprofits and mirrors the previous budget, and a record $894 million Bond Bill, which pays for transportation, capital projects and state infrastructure. That amount had been proposed for this year, but when the pandemic slammed revenues, it was cut to $708 million for 2021.

“When I worked for then-Sen. Joe Biden, I used to always remember him saying, ‘Don’t tell me what your values are. Show me your budget, and I’ll tell you want your values are,’ and I think that’s a good way of framing the importance of a budget,” Carney said Thursday morning in a virtual meeting detailing the budget.

The goals of his 2022 budget, he said, is to strengthen and rebuild the state’s economy, jobs for Delawareans, invest in schools and education, strengthening communities through public infrastructure and protecting our environment.

Delaware Republicans said in a press conference after the budget release that they were generally happy with it, applauded several points such as support for the state’s agriculture industry, but said they wanted to see the details of how all the money would be spent.

As part of what the budget presentation called “workforce investments,” Carney will put $22.7 million toward state raises for all employees. An employee will receive $500 per year or 1 percent of the person’s salary, whichever is greater, Carney said. He praised state employees repeatedly in his Tuesday State of the State address, saying that they had all stepped up during a trying year.

Carney said Thursday morning that the raises are part of a plan to move more state employees to $15 an hour and that will cost $4.2 million this year. It will affect 261 state agency employees and 1,000 paraprofessionals in schools, said Cerron Cade, director of the state budget office. This raise will put them at $13.50 an hour, Cade said.

“The state ought to lead the way there,” Carney told reporters during an embargoed press conference Wednesday to go over the budget.

The budget also includes $22.5 million to give teachers and paraprofessionals raises. Teachers will be able to get both Carney’s raise and step raises.

“That’s baked into this,” he said.

The budget also has another $14.5 million for step raises for education, higher education and state agencies.

The state will spend $3.6 million to buy body cameras for Delaware police, with $1.6 million going to equipment and $2 million for storage and personnel costs. Carney wants a program fully functional  by 2025. Buying body cameras has been a focus the Democratic social justice agenda and was talked about before COVID-19 popped up, scuttling most of the 2020 legislative session. racial justice protests  following George Floyd’s death added oomph to the game plan.

Careny said he would work with the Department of Justice, Defense Services, Department of Safety and Homeland Security to get the program up and running.

The governor said he wanted to set aside money for COVID expenses, which have largely been paid for by federal CARES Act cash, because the newer round of federal money may be more targeted than the funds released last year. The state is not yet sure how the new funds will work.

Last year, Delaware got $965 million in CARES Act money to spend as it wanted. It fell largely into four big buckets, Carney said: $238 million for the Unemployment Trust Fund, $178 million for DE Relief Grans for Small Businesses, $135 million for the Childcare Assistance Program and $132 million for testing and contact tracing programs. Some of the money also went to helping pay rent for those who lost their jobs because of COVID-19.

“We’re not getting money directly as we did with the first CARES Act … where we could allot it to the programs we saw fit,” Carney aid.

“My understanding of what we’re getting now is resources that are targeted directly for education or schools or directly for vaccinations, that type of thing,” Carney said. “So once we figure that out, we’ll have a better idea of what … we might need the $30 million for.”

The proposed 2022 budget includes items Carney wanted to fund in this year’s budget, including investing more in schools, economic programs and clean water initiatives, but had to cut because of the revenue shortfall.

The budgets must be approved by tw0-thirds of the Delaware General Assembly by midnight June 30 because the 2022 budget takes effect July 1.

Delaware budgets are largely based on forecasts by the Delaware Economic and Financial Advisory Council according to several rules, include less than 98 percent of the revenues may be budgeted and that the budget can only grow 3.5 percent under a formula determined by personal income growth over three years, government inflation and population growth.

The council meets five times a year to look at revenue and expenses and make predictions. When it met in December, it was projecting a $347 million surplus. Some of that surplus money is earmarked to go in a reserve fund.

DEFAC will meet again in May to look at final numbers, and they can change as they did in 2020 under the pressure from COVID-19.

Among other things, the 2022 budget proposal would put $68 million back into a reserve fund that the state accessed to help with the COVID-19 revenue shortfalls in the current budget. Among other things, those reserves helped the state avoid layoffs that other states were forced to implement, Carney said. The new money will bring the reserve fund back to $131 million.

Here are some of the additional details: