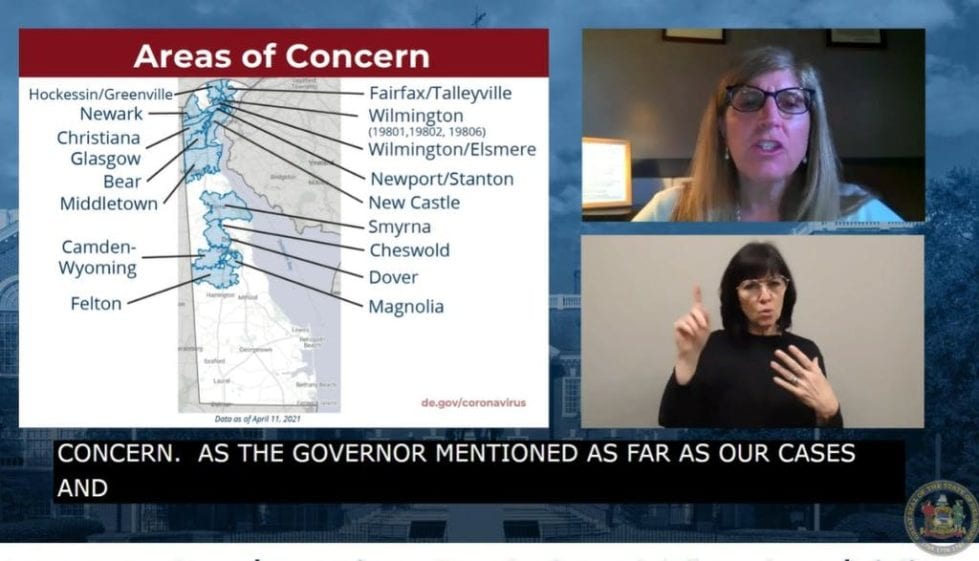 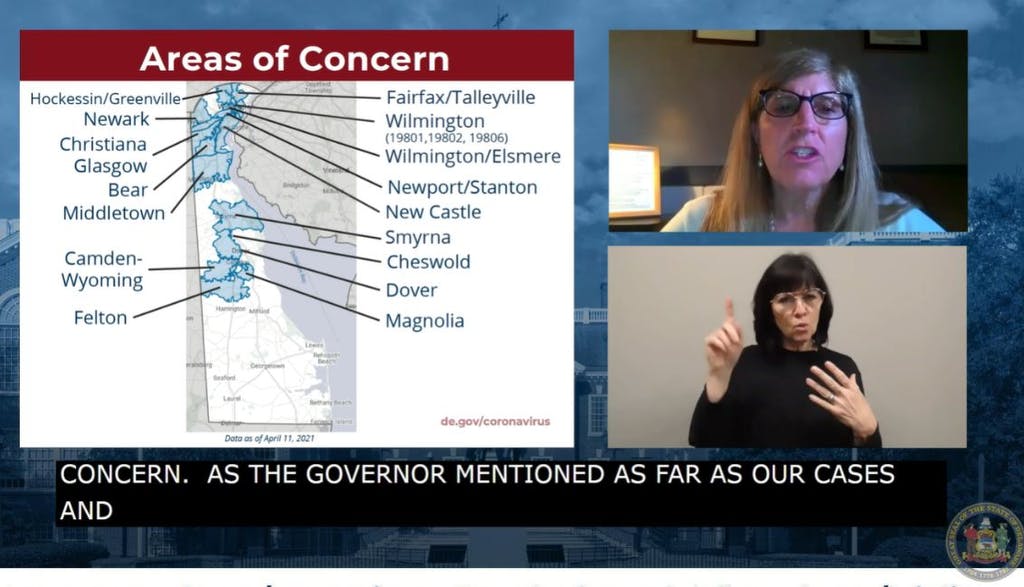 DPH’s Dr. Karyl Rattay said that 20 Delaware communities have more COVID-19 than the state would like to see.

Gov. John Carney said Tuesday that he has no intention of ramping up COVID-19 restrictions at the moment, even though COVID-19 cases are increasing in Delaware and the state has seen 70 fully vaccinated people who became infected.

Even with rigorous testing and vaccination in all three counties, the number of positive cases have been slowly creeping up all across the state. They’re also increasing more quickly in Pennsylvania, New York and New Jersey as the weather warms and more people gather face-to-face.

The state is seeing more cases of other strains of COVID-19, with random testing last week in a state lab showing a rise in the percentage of those cases compared to the total number.

“We’ve kind of leveled off a little bit with respect to hospitalizations, new positive cases over a 7-day moving average,” Carney said during his weekly COVID-19 press conference. “Hopefully this is the beginning of a downturn there. Obviously, we’ve got warmer weather coming, more focus on outdoor activities.”

Carney pointed out that outdoor dining during the spring and summer months was effective in limiting the spread of the virus.

“The hope is that we’ll continue to see a downturn in cases, hospitalizations and percent positive and be able to reduce restrictions,” he said. “If things get worse, we’ll have to take that as it comes.”

State officials said 83% of seniors and 43% of all Delawareans having received at least one dose of vaccine even as the state is seeing 331 new cases per day over a 7-day moving average and a 5.9% positive test rate.

Dr. Karyl Rattay, director of the Delaware Division of Public Health, said that as of last week’s meeting with local hospitals, the state has been seeing an influx of younger people being hospitalized due to the virus. There are currently 152 COVID-19 related hospitalizations in the state.

Rattay also talked about breakthrough cases, the term for coronavirus cases that happen after someone has been fully vaccinated, which means at least two weeks after their second dose of Morderna or Pfizer or their Johnson & Johnson vaccine, which is a single dose.

The state reports that it has seen 70breakthrough cases since vaccines started being distributed in the beginning of the year. Out of those 70, three people have been hospitalized and one has died. Those hospitalized and the death were among senior citizens, Rattay said.

The Delaware cases  align with the efficacy rates of the vaccine that were reported in the clinical trials, she said.

Health officials have been worried about how variant cases would effect Delaware’s numbers. In some states, variant cases — believed to be more infectious — make up more than half of new cases.

The Delaware State Lab routinely does random surveillance testing on a small portion of positive coronavirus cases to track variants.

Since starting, 9% of cases are coming back positive as some kind of variant, Rattay said. That’s up from just 4% a few weeks ago.

Last week, she said, 36% of the  samples came back positive as some kind of variant.

“I would remind you that the vaccinations that we have available do protect against these variant strains,” Rattay said, “so this does provide an extra incentive to be vaccinated.

Carney and state health officials also said Tuesday that the all vaccine providers were now cleared to give vaccine to anyone aged 16 and older, whether or not they had underlying conditions. They also said the state would stop giving Johnson & Johnson vaccine while the federal government considers the six cases of blood clots found in women in other states who had recently had the shot.