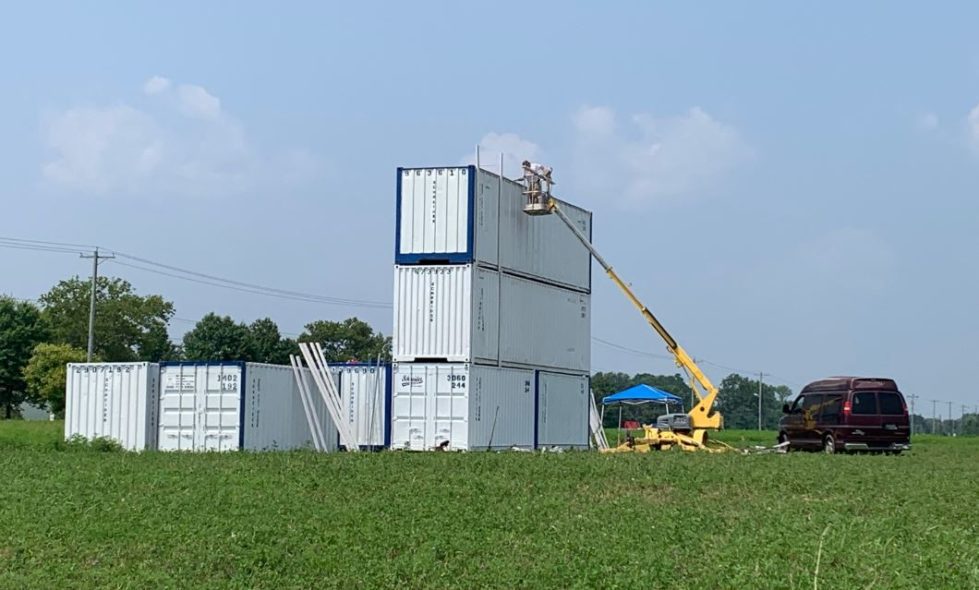 The worker on top of the lift at the Bear Drive In is attaching strips to the front of the cargo stack so plywood can be nailed on to make a screen.

The cargo containers are on site at the new Bear Drive In and workers on Monday were stabilize one stack and starting the process to install a screen.

The drive in on Bear Christiana Road, behind the Lowe’s, will use stacks of cargo containers to create two screens, one facing the road and one facing Route 1.

The site is meant to be temporary to determine whether there’s enough demand to build a permanent facility somewhere else, said creator Bob Weir.

He has been on site, where he says he’s hot and tired but pleased.

One man was working on a lift in front of the cargo container stack closet to the road.

“We will put up strips and then plywood over that,” Weir said. “We’re going to sheet the entire side of the stacks with plywood.”

The cargo containers are rented, and a worker on the opposite side from the screen was screwing down brackets to secure the rented containers.

“They’re not our container to screw into,” Weir said.

Weir said he’s happy with the pace of the work, and will know later this week if he’ll be able to open at the end of the month, as he hopes to do.

“Things are coming along,” he said.

The drive in will offer first-run movies. Admission will be $15 and include a 64-ounbce popcorn and 16-ounce drink, he said.

Sound will be projected through radios.

Readers had asked about how they would hear the radio if their car was turned off, and whether they could leave their cars running to keep air conditioning going.

Weir said cars will not be allowed to run on the site and will need to be left in auxiliary mode, which allows radios to work.

For those who fear the radio will run down the car’s battery, Weir said the theater has jump packs to help anyone with a dead battery.

Cars cannot be left running, he said, because “there’s a potential for carbon monoxide, especially on non-windy days.”

Each of the screens will be able to accommodate 150 cars.

The worker on the container stack is attaching brackets to secure the stack that will hold a screen for the Bear Drive In.