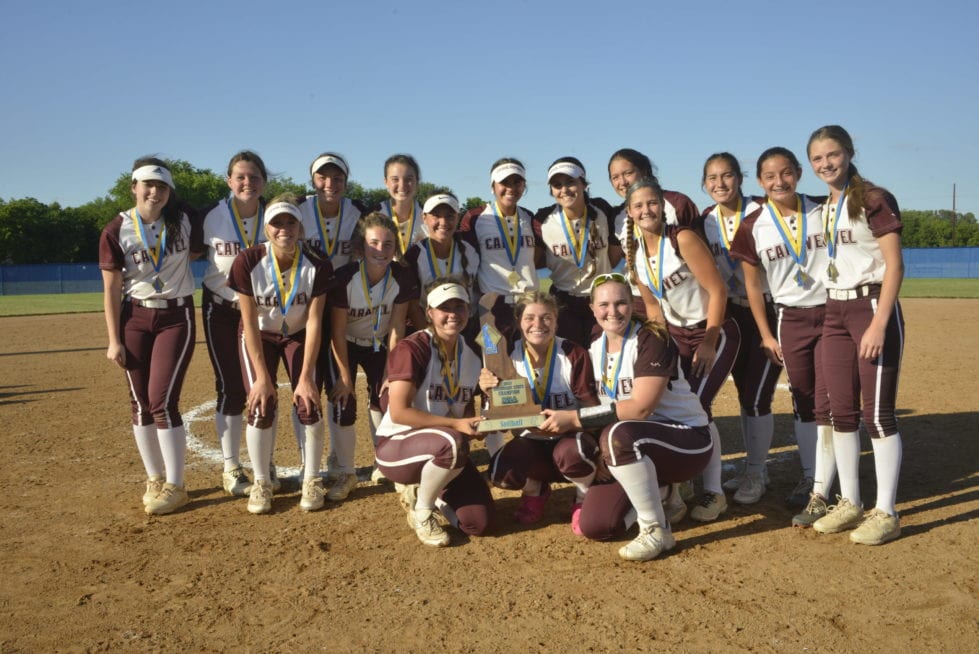 The Buccaneers’ senior Jess Walter & Golden Knight 1st team All-State pitcher, freshman Madge Layfield both struck out the side in the opening inning. The two battled thru the first 5 innings allowing just 2 hits a piece with Layfield striking out 11 & Walter 6 entering the 6th frame. That’s when things started getting interesting.

First team all-state shortstop Veronica Diomede smacked a 1-out triple to right-center. The next Caravel batter was Mikayla Walsh as everyone was expecting a bunt. Layfield got Walsh to pop up the bunt attempt for the second out & struck out Brooke Holdsworth to end the threat. The Golden Knights rallied in their half of the 6th when 1st team ALL-State catcher Kate Evick & Mya Jones singled with 2 outs. After a walk to Aryanna Briddell loaded the bases, McKenna Boyle stepped to the plate. (Boyle was in a similar situation in the semifinal against Laurel when she drove a fly ball to deep right field for a 3-run double.) This time she again lofted a fly ball to right, but Dani Dibenedictis made the catch to end the inning.

Both teams put runners on in the 7th inning but failed to score. Morgan Moxley led off with a walk and Haley Grygo singled her to second with one out, but Layfield retired the next two Caravel batters giving her team a chance to win in regulation.  Kaylee Verosco reached on a walk and pinch runner Kiersten Anderson swiped 2nd (the first stolen base of the game) then it was Walter’s turn to respond to a scoring threat as she retired the next 2 batters sending the game into “extras”.

After a quiet 8th inning, the defense took over in the 9th. Moxley singled on a hard ground ball to start things for the Bucs. Following a strikeout, Grygo hit a sinking line drive to right fielder Boyle, who made a “shoestring” catch and doubled up Moxley at first base. “One good outfield DP deserves another, right?” The Golden Knights received a lead-off double from Briddell, and Kamryn Payne was inserted as a pinch runner. She moved to third on a sacrifice bunt by Boyle. Then Kaylee Verosko ripped a line drive up the middle that appeared to end the game, but Kendall Browne made a great diving catch, doubled up Payne at third and sent the game into the 10th.

Layfield struck out the side to give her 21 for the game in the top of the 10th and Walter retired the Knights in order, after a runner reached on an error and the tension continued to build as the game moved to the 11th.

Diomede started the 11th with a pop up to shallow right and after the ball fell to the ground for a single, hustled to second base. Layfield recorded a strike out and up to the plate strode Brooke Holdsworth who was 0-for-4 against Layfield. This time Holdsworth laced a line drive to center that scored Diomede and gave the Bucs a 1-0 lead. Layfield retired the next two batters and the Golden Knights were down to their final 3 outs. Evick doubled on a fly ball that dropped just fair down the left field line, then Jones singled on a hard ground ball thru the left side and Central had runners on the corners with no outs. Jones took second on “defensive indifference” putting the Knights tying and winning runs in scoring position. Briddell hit a shallow line drive that Dibenedictis snared for the first out as the runners held up. The next batter (Boyle) laid down a bunt that Walter fielded and fired to 1st for the second out, again holding the runners. Walter then retired Verosko on a ground ball to Walsh to end the marathon game and start the celebration. It was the longest championship game in DIAA history, surpassing the 8-inning win by Milford over Caravel in 2009.

Walter ended the 3-hour game with 10 strikeouts, 2 walks, and allowed 7 hits. Layfield also gave up 7 hits while striking out 22 and issuing 3 walks. Diomede led Caravel with 3 hits and 2 walks as she reached base in all 5 at-bats. Jones had 2 hits to lead Sussex Central.