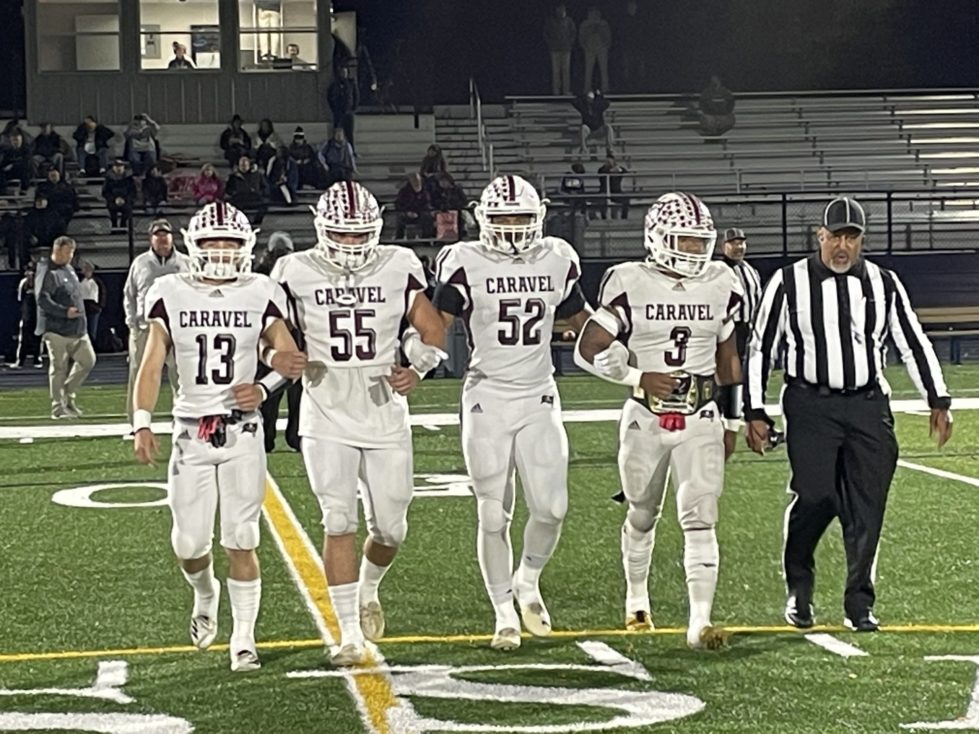 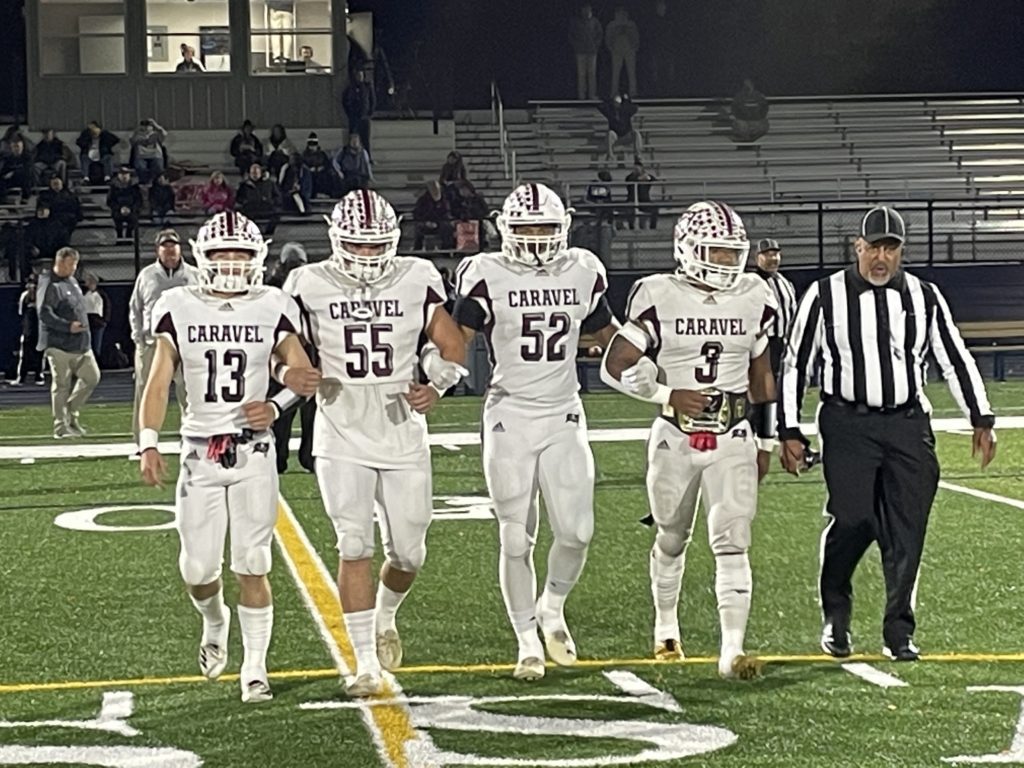 Abessinio stadium was the scene for senior night on Veteran’s Day as six St. Elizabeth Vikings suited up for their final regular season game. The unbeaten Vikings (9-0) hosted the Caravel Buccaneers (8-1) in a highly-anticipated contest featuring two of the best running backs in Class 2A and 1A. Ky’shwn Drumgo of Caravel came into the night with 959 yards rushing while St E feature back Quasim Benson entered the game with 1,501 yards on the ground. Drumgo had a special night as he scored 2 rushing touchdowns and added a third on a screen pass to lead the Bucs to a 35-0 victory. Along the way he gained 164 yards on 26 carries, finishing his regular season with 1,123 yards rushing.

Benson, on the other hand, never got the chance to display his running talent as he was “hobbled” from the start with a heavily taped lower left leg. He carried the ball just 4 times for 20 yards, the final attempt coming early in the 2nd quarter when he gained 10 yards, was tackled in front of the Vikings bench, and lay on the ground in obvious pain. His night was over.

Caravel began the game with a 41-yard, 10 play drive to score a touchdown on 4th and goal from the one as Sophomore quarterback Truman Auwerta dove in for the TD and a 7-0 lead. The score would remain that way until Mekhi Carmon recovered a fumble at midfield with 2:32 left in the half. Three plays later, Drumgo would get a nice block from Craig Miller to break to the outside and race 31 yards to the endzone. Offensive lineman Owen Robinson made the final block downfield to allow Drumgo to score untouched. The under-sized and out-manned class 1A Vikings held their own with a very talented class 2A Caravel, trailing just 14-0 at the break.

Caravel would dominate the third quarter scoring 21 points to seal the win. The first score came courtesy of a 14-yard screen pass from Auwerta to Drumgo. Following a short punt to the 30, and returned to the Vikings 18, it took Drumgo just one play to score from there and increase the Caravel advantage to 28-0.  St.Elizabeth’s offense put together a drive to the Bucs 45 after a great pass from senior Brett Smick to Matt Trout covered 36 yards. However the Caravel defense stiffened and the Vikings turned the ball over on downs.

The next Caravel possession ended with an interception by Gavin Andrews at the St E 10. Just 4 plays later, Craig Miller recovered a fumble for a 29-yard “scoop and score” to make the final 35-0 to end the 3rd quarter and start the running clock for the remainder of the game.

Both teams finished the regular season at 9-1 and will see what team they draw in the 1st round of the playoffs when the DIAA tournament committee meets on Sunday.