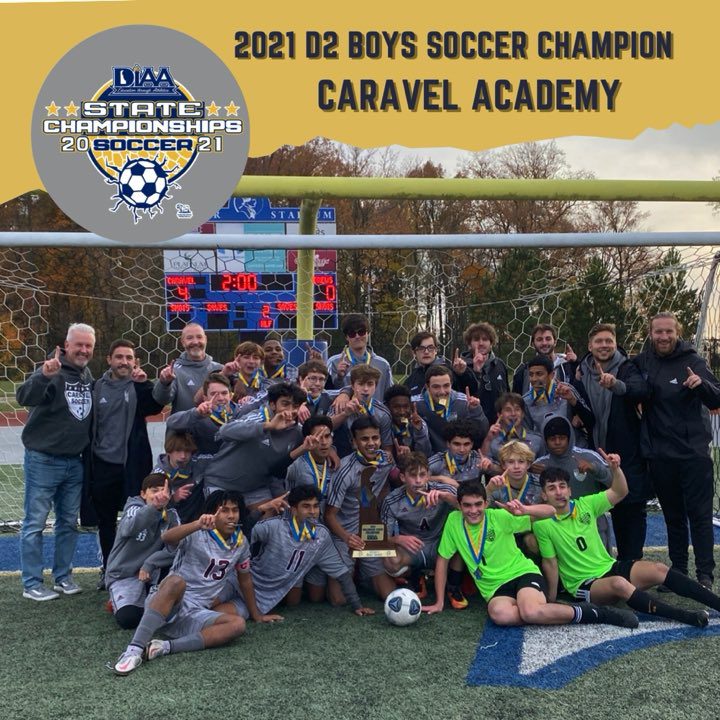 Photo courtesy of the DIAA

Caravel Academy scored 4 goals in the second half to defeat St Andrew’s 4-0 in the Division II boys soccer state championship.

St. Andrews was the lowest seed, but had a great run as they advanced to the championship. They defeated #5 DMA in round 1, then in the quarter finals #4 Wilmington Friends in a game that needed 2 overtimes and penalty kicks to determine a winner. Then in the semi finals they defeated Newark Charter in the same fashion they defeated Friends.

St. Andrews was able to keep Caravel off the scoreboard in the first half even though the Buccaneers had multiple scoring opportunities as they dominated time of possession. In the second half Caravel’s pressure was just too much for the Saints.

The Buccaneers got their first goal on a penalty kick by Zain Akhtar coming from a Saints foul.. A few minutes later, Mason Csapo sent a long pass on net that was mis-played by St. Andrews goalie Emmanuel Appenteng giving Zayd Akhtar an open net extending their lead to 2-0. Nikos Criniti and Samrath Singh both scored in the final minutes of the game to secure the Buccaneers the division II boys soccer state championship with a 4-0 victory.