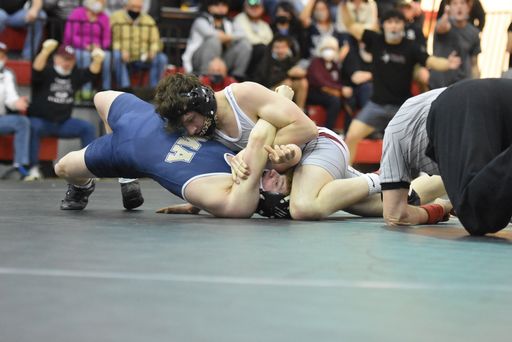 Smyrna – It has been a dominant season for the Caravel Academy wrestling team and they capped it off Saturday night winning the DIAA Division II dual meet state championship in the same fashion, beating Delaware Military Academy 52-15.

The Bucs finished a perfect 10-0 season scoring at least 50 points on every team they faced this season.

“It started with the heart of our lineup. I felt like if we could get that first win we would just keep rolling. The kids wrestled tough,” Caravel head coach Mike Welch said.

That first match was two time state champion Luke Poore who delivered with a 38 second pin at 126 pounds, the first of seven pins for Caravel.

The Seahawks answered immediately when Daniel Williams won a 3-1 decision over Dylan Knight in overtime at 132 pounds. It was the second meeting between the two with Knight winning the first meeting back in January in the finals of the Delcastle Invitational also in overtime.

Caravel’s Matt Duarte won a 9-2 decision over Hayden Moaney at 182 pounds and Brock Rhoades recorded a pin at 195 pounds as the Bucs took a 39-3 lead.

Delaware Military took the next three bouts starting with Tyler August receiving a forfeit at 220 pounds. Cael DiNigris won a 6-2 decision over Ky’shwn Drumgo at 285 followed by Gavin Munday winning a 9-3 decision over Clif Bakhsh at 106 pounds.

Caravel ended the match with a pin by Eddie Radecki at 113 pounds and Marcello Ioannoni closed out the night with a major decision.

“It feels good going out on top as a team in our senior year, I mean we really kind of built a dynasty here. Our goal has been to win as many as we could,” senior Alex Poore said.

Caravel’s Michael Kling (top) works for the pin over Dylan Delcollo of DMA at 138 pounds. Photo by Ben Fulton

Alex Poore of Caravel (top) records a pin over DMA’s Drew Simpson in their 160 pound bout. Photo by Ben Fulton

Luke Spoor of DMA (left) and John Antonio of Caravel get tangled up in their 152 pound bout on Saturday night. Photo by Ben Fulton