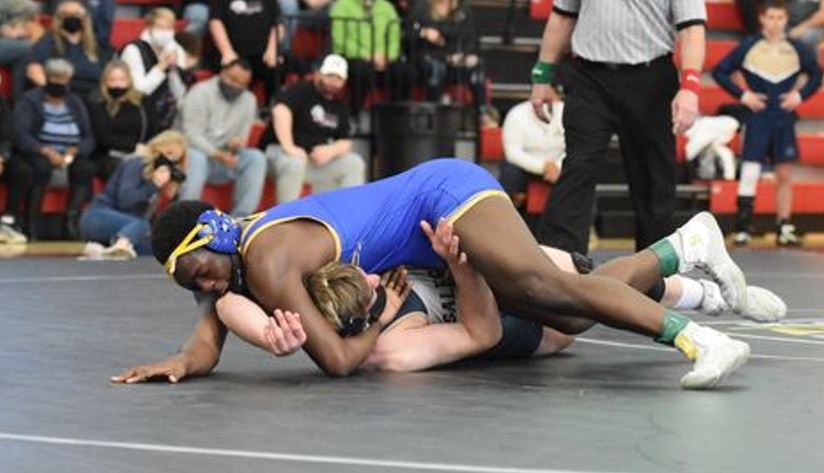 Shamar Nelson took his opponent down for a pin in 2:44.

SMYRNA — The Caesar Rodney Riders ended the regular season with a loss at Salesianum. Eight days later the two met in the semifinals of the D.I.A.A. Dual Meet State Championships at Smyrna High School on Saturday afternoon.

Antonio Darby got Caesar Rodney off to a fast start at 120 pounds with a pin in 5:48 over Brady Bartkowski after initially falling behind 5-0 to start the bout.

“Coach told me it was my time to shine, so I looked at my team and just went hard,” Darby said.

The Sals Colin Honaker answered with a 9-8 decision over Dylan Bennett cutting the Riders lead to 6-3.

Caesar Rodney responded with a pair of bonus points wins as M’Ja Smith won a 9-0 major decision over Sam Munch at 132 pounds and Cameron Cataldi pinned Frank Borzio in 4:50 at 138 pounds to put the Riders in front 16-3.

Carson Kist answered for Salesianum with a pin over Christian Rosbury in 51 seconds at 145 pounds. Caesar Rodney made the first of a series of lineup moves at 152 bumping Cody Waski up where he recorded a pin over Connor Sullivan in 2:59 putting the Riders up 22-9.

“Cody Waski’s pin was huge, we were just looking to flip the match there from the last time and he goes out and gets bonus,” Caesar Rodney head coach Dan Rigby said.

Salesianum cut into the Caesar Rodney lead with a pair of victories. Anthony Dellicompagni won an 11-3 major decision over Mason Bush at 160 pounds followed by Quinn Bartkowski winning a 4-1 decision over D.J. Baker at 170 pounds giving Caesar Rodney a 22-16 lead.

Brock Conner got the Riders back in the win column pinning Beau Minner in 39 seconds at 182 pounds. Max Agresti answered with a 29 second pin over Sam Soghomonian at 195 pounds.

The momentum swung back to Caesar Rodney when Shamar Nelson bumped up to 220. Nelson was down 5-0 when he took James Miller down to his back and secured the pin in 2:44. Josh Dyer sealed the match, bumping up to 285 and winning a 7-2 decision over Domenic Sama as Caesar Rodney built an insurmountable 36-22 lead.

Mason Cantania (106) and Cameron Davis (113) received forfeits to close out the match.

“We talked all week about how tough Sallies was going to be with some guys coming back from injuries and we told the guys we needed to flip some matches and get some pins. Antonio Darby just got us off to a great start and those pins later in the match were just huge,” Rigby said.

“I am just excited for these kids to get this win and now they have a chance to compete for a state championship,” Rigby said.