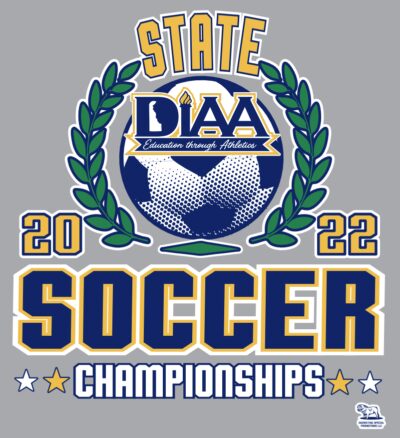 The match-up between the No. 2 seed Delcastle Cougars and the No. 7 seed Sussex Central Golden Knights did not disappoint Thursday evening in the first of two division 1 boys’ soccer quarter final games. Just 7 minutes after the 6:30pm kick-off, The Golden Knights jumped out to an early 1-0 lead, as Javier Escobar-Perez sent a left-footed shot from the top of the 18-yard box past a diving Delcastle into the upper right corner of the net. Delcastle continued their uninspired play as they found themselves picking the ball out of their own net again just before the 23-minute mark of opening half. This time it was Yonny Mazariegos-Ortiz who took a side volley with his left foot off a rebound right past a scrambling Cougar goalkeeper to put the Golden Knights up 2-0 with more than three quarters of the match yet to be played.

Delcastle came out of halftime and demonstrated why they were given the No. 2 overall seed in the tournament. After dominating possession in the first 12 minutes of the half, the Cougars finally broke through as Diego Pedroza-Luna scored off a crossing ball moving left to right from about 15 yards out. The game picked up in intensity level and action after the Pedroza-Luna goal as the Cougars seemed to finally be “awake” and engaged. After back-to-back Cougar yellow cards, the No. 2 seed would strike again. Redirecting another cross moving left to right Anthony Huertero-Perez knocked the ball into the back of the net to tie the match at 2-2 with 21 minutes to go in regulation time. The Delcastle squad was not done however. Jose Peroza-Luna sent a beautiful header back across the goal past the Golden Knight keeper to make the score 3-2 with 16:08 to go in the match.

With everything seemingly going Delcastle’s way, Javier Escobar-Perez, who had scored the first goal of the contest blasted a free kick right past the Delcastle wall from 20 yards out to bring the game to a 3-3 tie with short time left in regulation. After some back and forth in the middle third of the pitch, we would go to overtime. Two 10-minute halves to decide who will take on the winner of Wilmington Charter vs Caesar Rodney on November 16th in the semi-finals. The opening 10 minutes and most of the second half of overtime were uneventful except for a number of injuries on both sides that required match stoppages that were longer than anything we saw in the first 80 minutes. What looked like a game destined for penalty kicks was not to be as Javier Escobar-Perez ripped a left footed shot into the right-side netting as the clock ticked down to zero in the second half of overtime giving the No. 2 seed no time to find an equalizer and sending Sussex Central into a well-earned celebration as the referee blew the final whistle. The Golden Knights will face either Wilmington Charter or Caesar Rodney in the semi-finals.