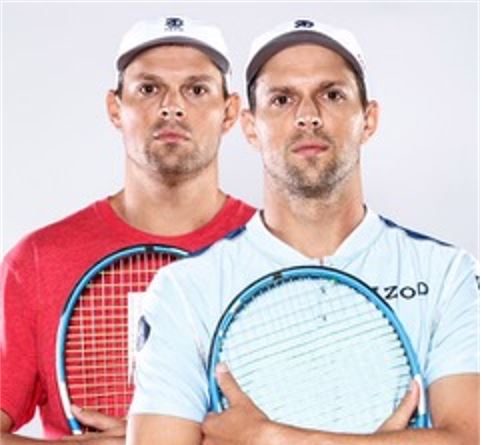 Identical twins and tennis doubles champions Bob and Mike Bryan are headed to the area for clinics and appearances.

The winningest doubles tennis players in world history will be in Lewes on Saturday, Aug. 28 where they will host two clinics to raise money for a local charity.

A second set of clinics will be hosted in Easton, Maryland on Sunday. Both events are sold out.

Identical twins Bob and Mike Bryan will return to the area Sept. 25 for RodneyStreet’s 2021 Annual Benefit at Brantwyn Estate in Wilmington.

The Bryans have won 45 Grand Slam trophies, 119 doubles titles together and have been ranked No. 1 in the world for a record 11 years. They have won Olympic Gold, dozens of Davis Cup match wins and an NCAA doubles championship.

Dr. Dave Marshall, owner of the Dave Marshall Tennis Facility located within The Plantations community in Lewes, has been coaching the Bryan brothers since 2016.

“We’re so excited,” Marshall said. “They are the greatest doubles players to ever play the game, so we’ll be working on ‘how to play like the Bryan brothers.’”

Marshall will also be on hand to show participants what it takes to train like the Bryans.

“We are thrilled to have Bob and Mike in our hometown,” Marshall said in a press release. “The eastern shore has a vibrant tennis community and bringing role models of this caliber to our area will have a tremendous impact on the future growth of the sport.”

Participants will enjoy a courtside lunch and session with the pair and their coaches. Time will be allotted for photographs and autographs with the brothers.

“It’s been a special ride for me,” Marshall said. “We won the U.S. Open, we won Wimbledon, we actually won the world championships. The Bryans are fantastic.They’re just two of the nicest human beings you’d ever want to meet.”

Tickets for spectators are also available and allow customers to sit on the court and watch the clinics, attend the lunch with the Bryans, and take photographs with the players.

The Sept. 25 for RodneyStreet event raises money for youth tennis.

“Our organization is aimed at underserved youth in the Wilmington area to provide a combination educational enrichment programming and tennis,” said Joel Friedlander, president of the board of RodneyStreet.

He said he was thrilled to be able to host the annual benefit in person after the 2020 event was cancelled due to COVID-19.

“We’re super excited to have the Bryan brothers at our event this year,” Friedlander said. “There’s all sorts of sponsorship levels available and attendance is welcome, and it’d be great to see everybody at DuPont Country Club.”

Tickets and information for that event can be found here.

151st General Assembly opens an era of virtual gatherings
Tatnall's second quarter run proves to be too much for Friends
Pie, anyone? Playhouse’s long intermission ends with ‘Waitress’
Calls mount for McGuiness to resign, be impeached