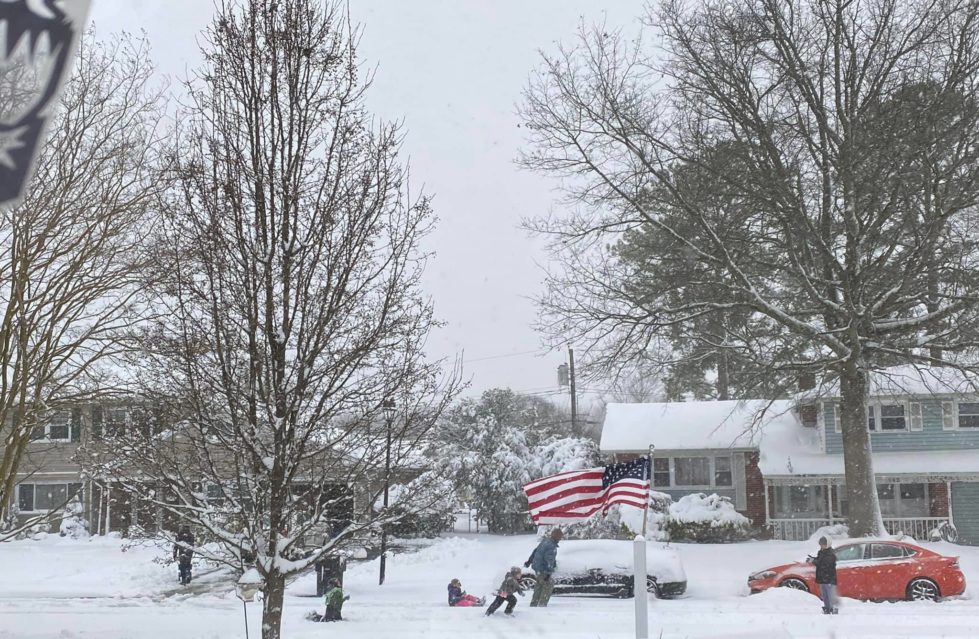 Dover cars and neighborhoods were covered with snow in an early January storm. Photo by Erica Rae/Delaware Community Lens

A bill that aims to fine drivers who operate a vehicle without first clearing it of snow and ice — and penalize them further if that snow or ice falls off and causes damage to another vehicle — passed the Delaware Senate Thursday.

The bill, which has been in the works since 2014, had passed the Senate’s transportation committee in March but didn’t come up on the Senate floor before the session recessed in June.

Senate Bill 64 would require drivers of vehicles to remove accumulated ice and snow before driving the vehicle on any roads with a speed limit of 26 mph or higher.

An amendment approved with the bill removed the requirement for any roads with speed limits of 25 mph or lower.

Sponsor Sen. Bryan Townsend, D-Newark, said that rule is geared largely toward bigger, higher-speed roads where snow and ice can fly off and hit cars or people and cause damage or injury.

The speed limit change was designed to keep allow people to drive through neighborhoods, he said.

“I would like people to take this seriously and clean off the ice or snow from their vehicles before moving,” he said. “But in the event that they don’t, I would much rather enforcement of it happen prior to people getting on I-95 or Route One.”

SB64 would impose penalties of not less than $25 and not more than $75 for each violation of a car that is caught driving with accumulations of ice or snow. The bill also allows police to pull vehicles over for that alone.

Each day a car is driven without ice and snow being removed would trigger a separate violation but a driver could not receive more than one ticket within a 24-hour period.

When ice or snow does fly off a moving vehicle and cause property damage or physical injury, penalties are different for personal or commercial vehicles.

Those drivers would still be liable for legal actions by their victims, Townsend said.

The proposed law would exempt a vehicle that’s being driven continuously during the day in bad weather from having to remove ice and snow that builds up, except for from its windshield.

Other states and jurisdictions have rules similar to the ones in SB64, Townsend said, noting that AAA has endorsed the bill.

“If you do not clean off your vehicles before driving them, you can pose a significant safety hazard on the roadways,” he said.

Delaware has had two snowfalls in January, with some downstate areas getting as much as 12 inches.  Another winter storm is expected Sunday night through Monday morning, but forecasts are not yet specific about how much snow, sleet and rain will be involved.

Sen. Dave Lawson, R-Marydel, questioned whether the 25 mph amendment should be axed. He said he’s seen people hit their breaks and the snow slides over their windshields, blocking their view. Drivers should not be on the road like that, he said, and no one knows what will happen if a driver continues operating their vehicle in that condition.

Townsend said current law made it illegal to drive with your windshields obstructed.

He said he was going to trust law enforcement to gauge the most effective and safest way of enforcing the rules before drivers get onto high-speed roads.

Sen. Darius Brown, D-Wilmington, said he was concerned that this was going to be difficult for city residents to comply with, noting that many roads in city neighborhoods have speed limits higher than 25 mph.

None of the fines instituted under the rule would appear on a driver’s record or cause the driver to lose any points on their license.