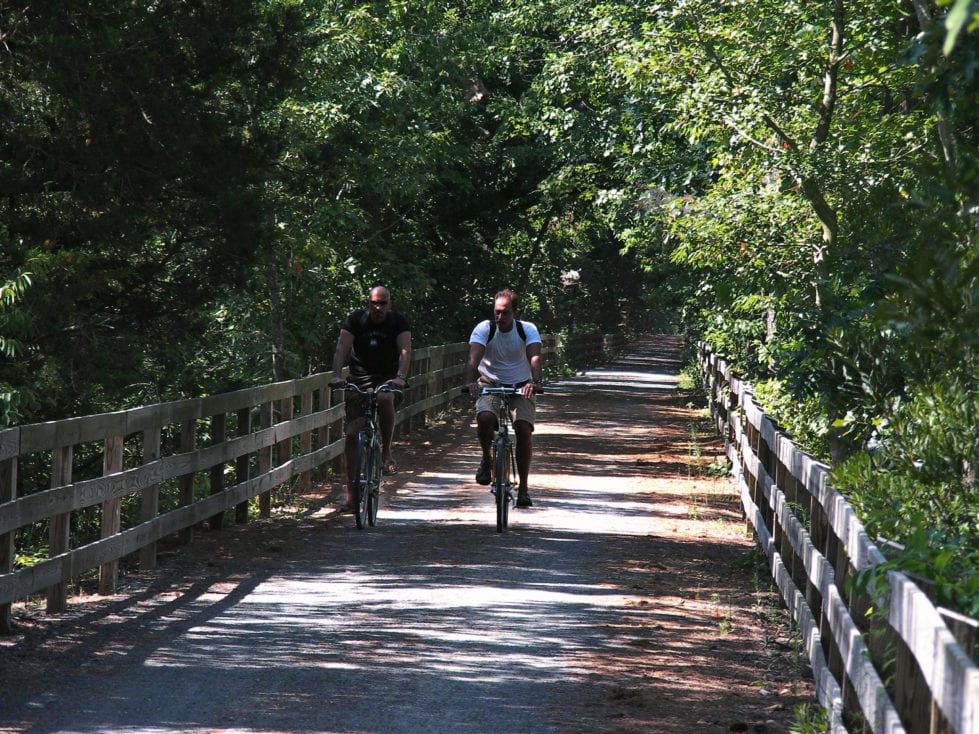 The six-mile trail from Rehoboth to Lewes is the pathway’s most popular part. Photo courtesy Southern Delaware Tourism

Delaware has been in the top 10 of “bike friendly state” lists for the last decade, and on Friday, one more link in the network of bike paths will officially open.

The $513,000 Junction and Breakwater Pathway Rehoboth Beach Extension will connect a 10-foot-wide asphalt trail from Canal Street to Rehoboth Avenue, among other enhancements, linking Rehoboth and Lewes.

Along with the newly opened Grove Park Dock near the Rehoboth Beach Museum that allows residents to easily commute by water between Rehoboth and Lewes, the bike path that tracks along an old railroad line gives those in the beach area alternatives to automobiles.

The Junction and Breakwater Trail also ties the resort’s glory days of locomotive travel to a 21st century method of staying in shape and enjoying the beauty of the local area.

It’s also a popular method of staying off area roads and out of what’s often bumper-to-bumper traffic during the summer months.

“The trail is really beautiful and is a great way for me to get my daily exercise,” says Charlie Cole, a frequent rider of that path.  He uses the route about three times a week year-round.

“I really take the trail for the beauty of it, not only the forests and nature but also the people along the way who have spruced up the trail and made it inviting for everyone,” he said.

The trail includes an old railroad bridge that dates back more than 100 years and crosses Holland Glade. and offers beautiful views of the area marshes located in Cape Henlopen State Park, Delaware’s most visited state park.

Bike trails have become a premier attraction in Southern Delaware, according to Scott Thomas, director of the Southern Delaware Tourism office. Shops in the area rent bikes for those who don’t bring them along to the beach.

“This trail is a must activity whenever I’m entertaining family and friends who are visiting,” he said. “You can bike it at your own pace and stop at some great places to eat, drink and relax. This is one of the best ways to take in the beauty and vibe of coastal Delaware.”

The most popular section of the trail runs about six miles, but it does connect to other trails for health enthusiasts and nature lovers who want to continue on to other areas of southern Delaware.

Beginning at Gills Neck Road in Lewes, the Junction & Breakwater connects to the Georgetown-Lewes Trail if you’d like to head a bit further west, as well as to the Gordon’s Pond Trail for riders who’d like to try a different path along the coast.

“Taking the trail is a real pleasure and I like to take my time so I can see as much as I can,” admits Cole. “I go at a good speed and get my exercise, but I also enjoy looking around and enjoying myself as much as possible.

“I really get the best of both worlds when I’m out on the trail.”

In addition to Gills Neck Road, popular access points include Wolfe Neck Road near McDonald’s and behind the Tanger Outlets Seaside Center near The Glade Road, according to the website for the Lewes Chamber of Commerce.

The Junction & Breakwater Trail officially opened in December of 2003 and was a length of just three-and-a-half miles until it was expanded four years later to a total of six miles. Now the associated trails add up to about 14 miles.