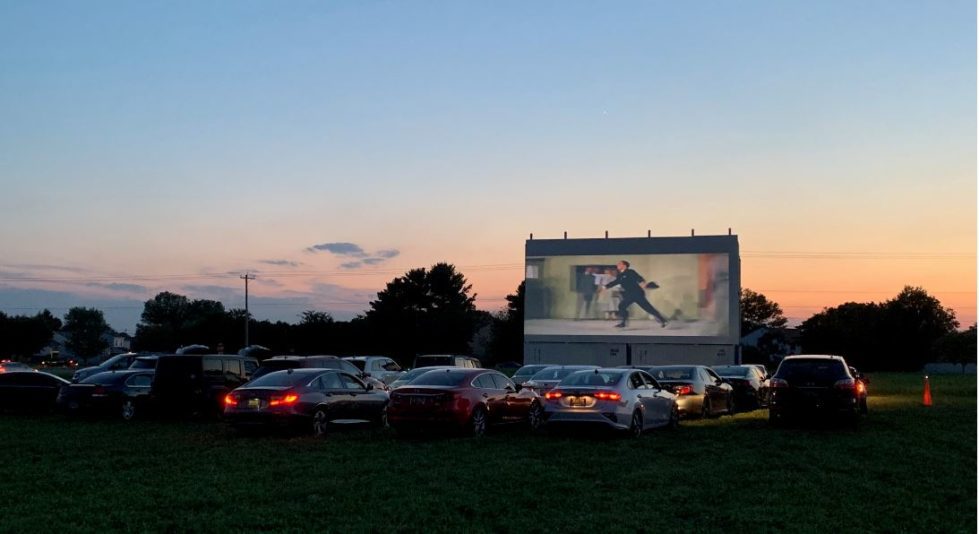 A video of classic movie moments ran before ‘F9.’

The Bear Drive In’s opening night started with a line of more than 50 cars waiting by the time the gates opened at 6:45 p.m.

The cars stretched around the arc that is Songbird Drive, which curves around the Bear Lowe’s.

By the time “Jungle Cruise” started, owner Bob Weir declared himself happy and satisfied with the 150 cars that arrived, most going to “Jungle Cruise” in the twin-screen facility.

He said he was pleased that admission flowed smoothly and that the concession stand wasn’t ever overwhelmed.

The site will hold 15 cars at each screen, and he hopes to build up to that.

Ushers steered big trucks and SUVs to the outer edges of the car parks, with smaller cars in the center. The evening was cool and breezy, and many people opted to sit outside.

Most cars at “Jungle Cruise” included families with children. There were also plenty of date-night couples, girls night out and older couples.

Advertisements before the shows included classic invitations to buy snacks at the concession stand and said coming movies would be “Suicide Squad” on Aug. 6, “No Time to Die” and “Ghostbusters Afterlife.”

Many patrons parked and walked over to Lowe’s to buy insect repellent. Others said they had no need of it.

The drive in asked people to turn cars off to avoid both sound and carbon monoxide problems. Several people could be seen struggling to figure out how to put push-button ignitions into auxiliary mode so that the sound could play over radios. One man brought a lime green radio and played the sound over it.

The screens were built of stacked cargo containers with a wood screen installed on them. One visitor said she’d like to have a bigger screen.

Weir has said this year’s efforts are a trial run. If Bear Drive In is successful and maintains business, he wants to find a more permanent site.

Tickets are $15 for adults ages 15 to 64, and include a 84-ounce bag of popcorn and a 16-ounce Coke, Diet Coke, Dr. Pepper, Sprite. ginger ale or water.  Discounts include $11 for those ages 55-plus, military or emergency personnel; and $11 for children ages 5 to 14, who get a smaller popcorn and drink. Children 4 and younger are free.
The theater will only have one showing of each movie each night.
The concession stand sold hot dogs ($3), nachos, popcorn, candy and snacks.

Advertisements said that when the drive in begins opening on Wednesdays starting Aug. 11 cars will be allowed to enter for $30, no matter how many people are in them.

The line to enter the Bear Drive In stretched more than 50-deep before gates opened, but moved quickly.

A classic car and a truck towing a VW beetle were among the vehicles driven to opening night of the Bear Drive In.

Classic movie ads reminding people to visit the concession stand were part of the show.

‘Jungle Cruise’ begins Friday night at the Bear Drive In.

People watched from inside, out of cars at the Bear Drive In’s opening night.