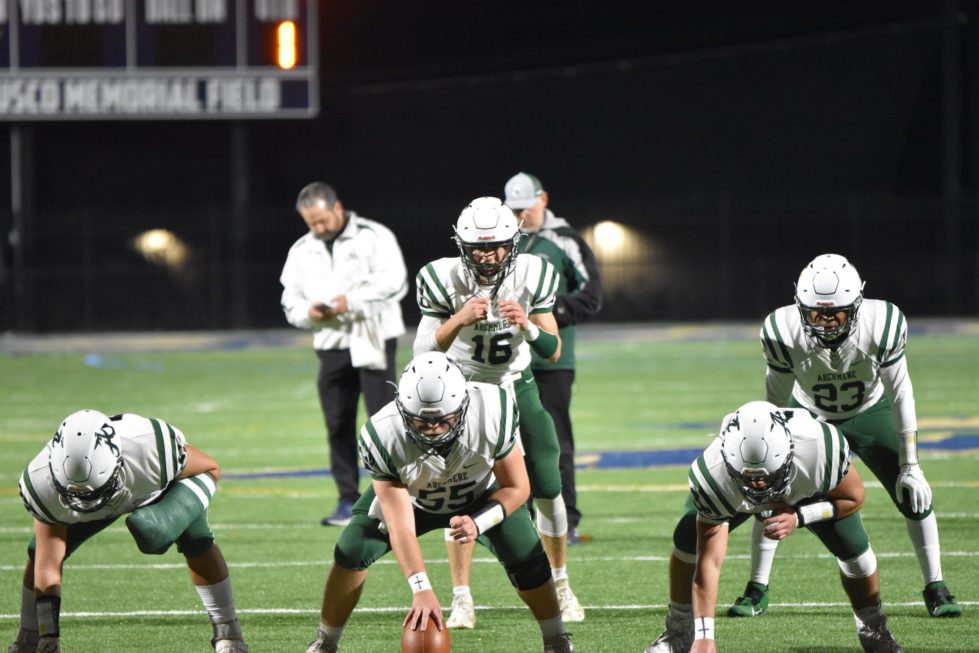 WILMINGTON — A balanced offense and stellar defense spelled success for Archmere on Friday night at Delaware Military Academy, The Auks stunned the Seahawks, 27-7, at Fusco Memorial Stadium in a battle of undefeated Class 2A teams.

The Auks took advantage of Seahawks turnovers, scoring once in each half after recovering DMA fumbles. Late in the first quarter, Cam Kilicoglu covered a loose ball at the Seahawks’ 22, and it didn’t take long for the Auks to strike. After a penalty advanced the ball to the 17, quarterback Chris Albero found Conor Udovich for a twisting catch in the left side of the end zone for a 7-0 Auks lead with 1:37 to go in the first.

Archmere’s defense was stout all night, and that unit set its offense up for a 63-yard scoring drive after forcing the Seahawks to punt. The drive included passes of 14 yards to Declan Pearson and 32 yards to Udovich. Albero and Udovich connected again to get the ball to the 3, and after a penalty moved the ball back five yards, Albero carried it in to double the Archmere lead.

A DMA drive at the end of the first half ended with a sack by the Auks’ Nate Morda, but the Seahawks received the ball to open the second half. Cody House returned the second-half kickoff to the Archmere 29, but on the first play of that drive, the Seahawks fumbled.

They held the Auks, as Archmere’s offense was forced into punting several times in the second half, and Cole Fenice launched a high, soaring punt deep into Seahawks territory. The ball bounced through the hands of the return man, and the Auks fell on the loose ball at the DMA 8. Two plays into the Archmere drive, it was third and goal from the 10, but Albero and Udovich teamed up once more for a touchdown.

After that, DMA held on to the ball, but the Seahawks struggled to keep drives moving. They turned the ball over on downs three times in the final quarter and a half.

The Auks, meanwhile, added six points to the score after getting a piece of a punt by Alleyne. Starting at the DMA 19, they moved the ball on rushes by Pearson and Udovich. Albero was on his way to a 3-yard touchdown run when he was smacked by a defender, and the ball came loose. John Dellose was there to grab a fumble and get some help into the end zone. The extra point was blocked, but the lead was 27 with under 7 minutes remaining.

Khyaire Hines and Devon Green finally found some open space for the Seahawks, and Green scampered in from a yard out to get the team on the board., but that was it for the offense.

Albero finished with 94 yards passing and 37 yards rushing. Udovich had 76 yards receiving on four catches with the two scores. Defensively, Scott Lucarelli had 10 tackles and an interception, and Fenice added nine tackles to go along with a stellar night punting. DiGregorio had eight tackles. The Auks (10-0) will have a first-round tournament bye when the Class 2A field is announced Sunday.

DMA finished the regular season 9-1 and also will learn its playoff assignment on Sunday.