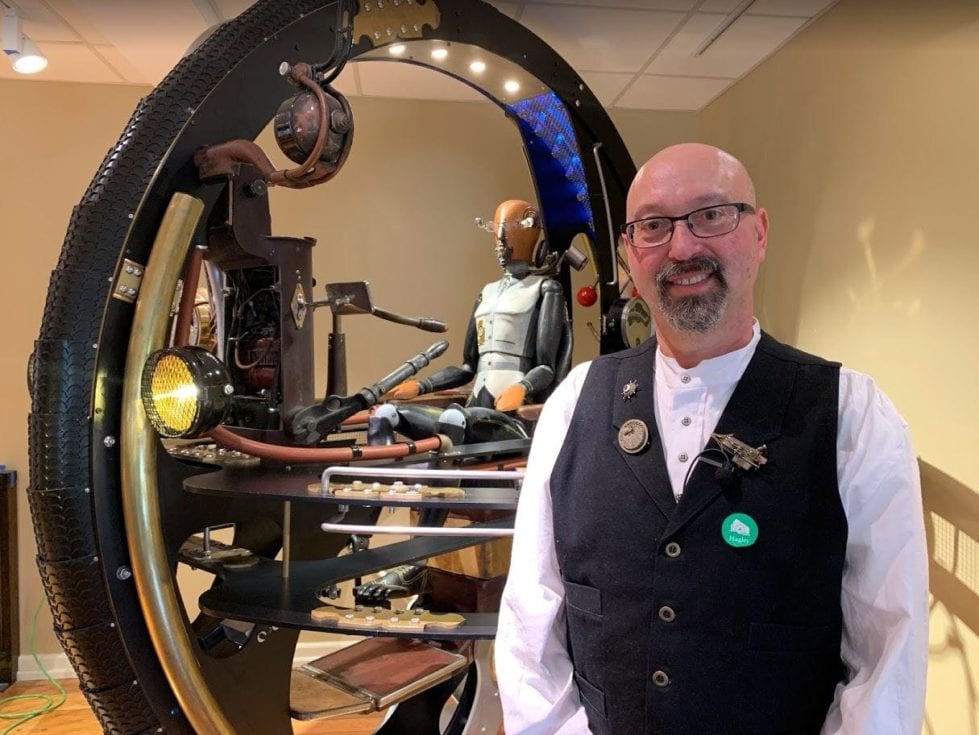 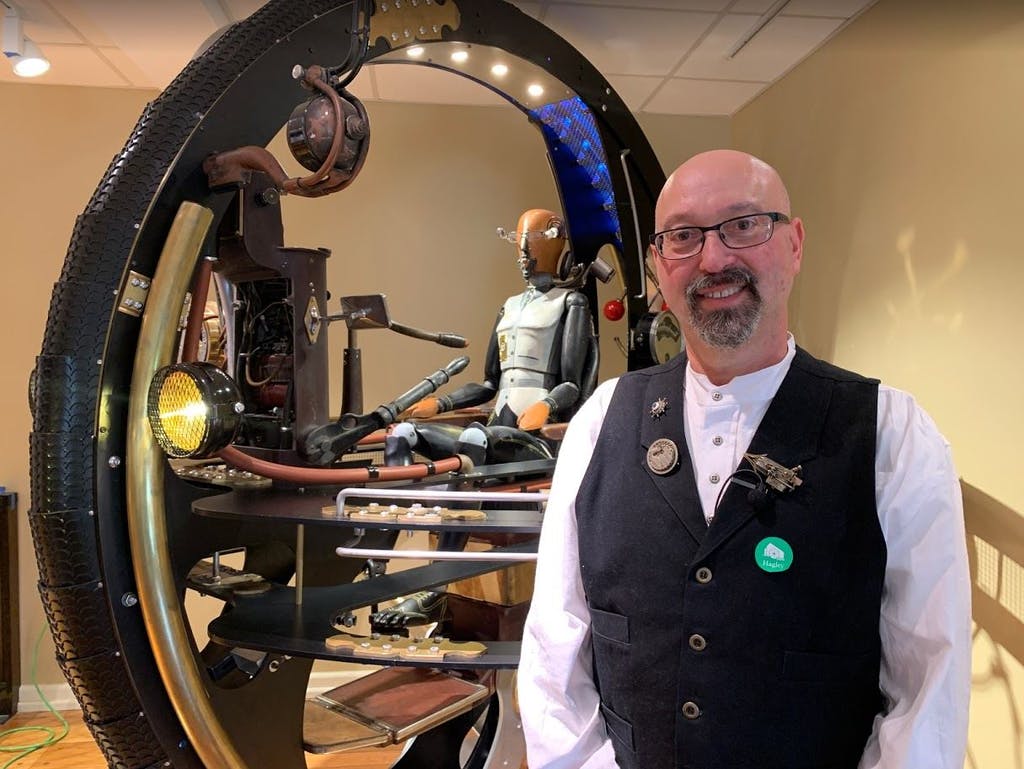 Artist Bruce Rosenbaum;’s mini-me sits in his steampunk Velocipede Time Machine, which will welcome guests to Hagley’s visitor center when it opens next month.

It took a steampunk artist to connect the dots between the power of invention, manufacturing gunpowder in the 1800s and a still-influential 1895 novel about time travel.

Bruce Rosenbaum did it with steel, copper tubing, electric lights and an antique barber shop chair for his “Velocipede Time Machine,” which he installed last week in the lobby of Hagley Museum’s Visitors Center.

The 10-foot tall, 1,000-pound art work will greet guests arriving for Hagley’s new permanent exhibit, “Nation of Inventors,” when it opens in September.

But those buying tour tickets in the visitor’s center lobby when it reopens in June will get a first peak at Rosenbaum’s kinetic sculpture.

It’s inspired by three patent models that will be part of the exhibit: A velocipede, governor balls and electric magnetic dynamo.

A velocipide is an early version of a bicycle. The electromagnetic dynamo was a way to transfer energy from something like pedaling into electricity. And the governor balls were used for steam engines to control speed. As the engine went faster, the balls impaled on steel arms would rise like wings on a bird.

“If you’ve ever heard that term ‘balls to the wall,’ that’s where that came from,” said Rosenbaum.

He describes his work as sitting at the intersection of art, history and technology, and the idea of creating a piece to capture the spirit of inventing appealed to him.

“My whole process is about invention, innovation and creative problem solving,” said the Massachusetts resident. “These inventors who did these patent models and these inventions went through the same process. It’s all about being able to learn from the past because it’s less about inventing and more about innovating. Innovating is taking something that already exists and making it better, or finding a different use for it. A lot of the patterns in here, they’re innovations.”

The final result is an engaging sculpture that looks like the vehicle described in H.G. Well’s “The Time Machine,” with two giant rings bisecting each other, with a chair and all kinds of gizmos in the middle. A figure that is essentially a mini-me of Rosenbaum sits in the seat, ready for action.

Visitors at Hagley — which was the du Pont family’s first home and the site of their gunpowder yards — will be able to read about the patent models and press a button. When they do, motors will activate the dynamo, lights will race around the vertical wheel and the governor balls will rise.

Guests will not, so very unfortunately, be able to sit in the seat and punch buttons to send themselves hurtling into the future or past.

“When Hagley started planning ‘Nation of Inventors,’ we thought about how to link the past with the present, and images of steampunk came to mind,” said Hagley Executive Director Jill MacKenzie. “Bruce Rosenbaum’s name is synonymous with steampunk so selecting him as our partner for the sculpture was a natural.  His unique blending of history, art and technology resonated with us, and “Nation of Inventors” seemed like the ideal place to display one of his kinetic steampunk creations.”

The exhibition will celebrate American innovation, which often improves upon existing technology, she said.

“Bruce, a modern-day innovator, combines objects from an era of industrialization to create an entirely new object with a futuristic twist.  We hope that Nation of Inventors will help visitors discover the innovators within each of them.” 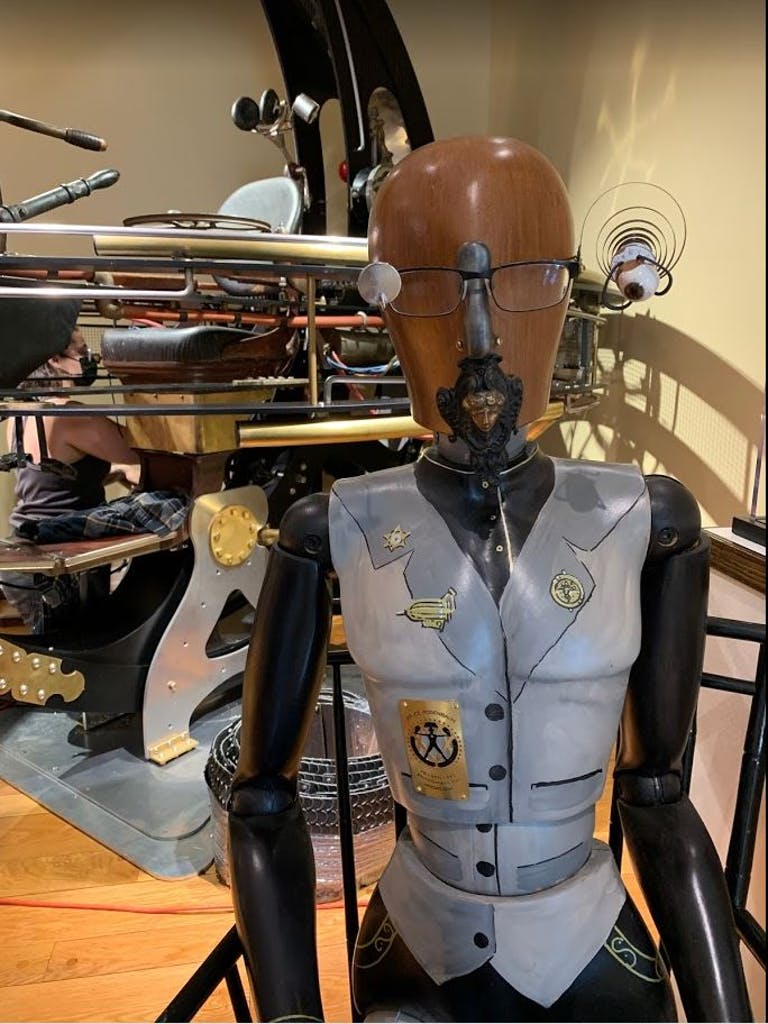 Rosenbaum, who has a degree in business from UMass Amherst and a master’s in business administration from Duke University, for years he ran a successful direct mail marketing company.

In the 2000s, he and his wife, Melanie, bought a 1901 Victorian craftsman home in Massachusetts and had planned to furnish it with period antiques. But having them just sitting around was boring, he said.

“Instead of having the antique just sit in the corner and say this is what it did, let me just take whatever technology, conveniences, appliances, you know, and bring it into these older objects, because the technology was boring, and I wanted to give it flair,” Rosenbaum said.

Some Millennial friends saw it and told him he was steampunk.

“That sounds weird and wonderful,” he responded. “What is that?”

He is now so well known for his steampunk kinetic sculptures that he once was hired by Hendrick’s Gin to  create a 26-foot Rube-Goldberg-like cucumber slicer that was 26 feet long and has traveled across the country twice and through Europe. In that $1 million project, the cucumber started at one end of the contraption, goes through all kinds of convolutions and ends up on the other end, where a slice is chopped off and dropped into a drink. 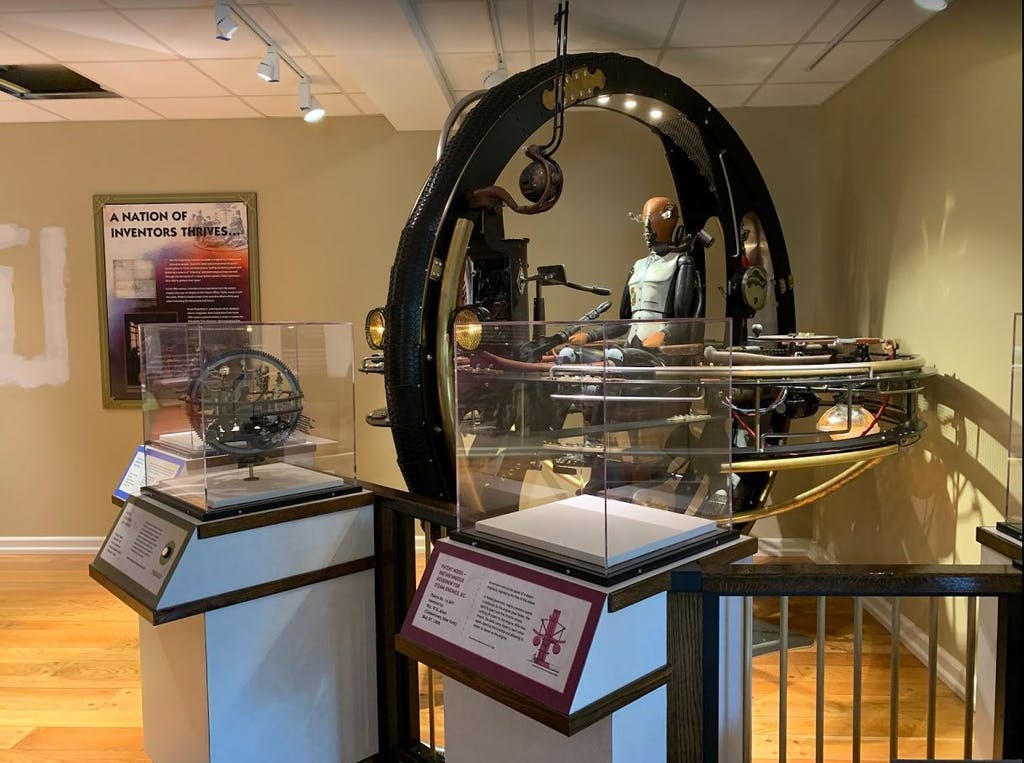 Steampunk is rooted in science fiction — man’s innovative mastery of his environment — and often is pegged to the Victorian era or industrial age from the mid-1800s to the early 1900s, he said. But he’s used the style for the 1930s as decopunk, for the 40s as a diesel punk or even a Midcentury Modern Punk.

“But I tell people that once we get to the 1970s, it’s all over because there’s no such thing as plasticpunk,” he jokes. Then he turns right around and points out that the “Terminator” movies are actually cyberpunk, an imagining of how technology will be used in the future.

“So it’s a retrofuture kind of thing going back and forth at the same time,” he said.

It’s also a popular school topic for both autistic and neurotypical kids, combining science, technology, engineering, math and art in which Rosenbaum calls a STEAMpunk curriculum.

That punk, he said, refers to history, because understanding the context is the cool factor.

When Hagley asked Rosenbaum for “an impactful art installation,” he asked to look at the museum’s warehouse.

“I couldn’t, of course, pay homage to all of those,” he said.

Between 1790 and 1880, the U.S. Patent Office required an applicant to provide a model that was no bigger than 12 inches by 12 inches by 12 inches of the item or process he or she sought to trademark. (Fun fact: Patents were considered so important that presidents from George Washington to Abraham Lincoln signed them).

He and his wife now live in a converted 1876 Gothic church in Palmer, Massachusetts, which he once routinely passed on the way to college and back. They’ve turned the church into a museum, ModVic‘s workshop and homes. They offer tours.

Rosenbaum’s “Velocipede Time Machine” had to be built by fabricators at Salmon Studios in Florence, Mass., and then moved to Hagley.

The artist is amused that inventors would make a model before they built a machine, so they were actually building first on a small scale, but he worked in reverse, starting huge.

He hopes visitors will realize that his sculpture incorporates other people’s ideas and better understand that inventing is really creative problem solving.

“It’s not a solo kind of venture,” he said. “You have to work well with others to make these things happen and to change the world.”

He hopes children especially will see the sculpture as an example of resilience and adaptive reuse and that will help them cope with the frustrations of something like the COVID-19 pandemic.

“We can change, we can evolve, we can adapt,” Rosenbaum said. “And if you get that in your head, it changes your whole perspective on how to be more resilient. That’s an idea we need more.”

Those fired for refusing vaccine not eligible for unemployment benefits
Dem. bill would guarantee health insurance for undocumented children
New museum exhibit celebrates why Swedes came, how they lived
Allen says DSU “shall not be moved” from keeping its doors open